Over the past century, Simon Oosterdijk and Elizabeth Wilson’s Newton apartment has been many things: a Sanitarium workroom, an animal shelter, a hat factory. Set off Upper Queen St, the elevated, industrial-style space is part of an enclave still known as “the pound” — a mural of a canine even appears on their courtyard wall when the vine leaves die off in winter.

But it’s too stylish to go to the dogs, a coterie of architects, designers and musicians has taken up residence in the surprisingly quiet street. “Well it’s quiet in the day time,” says Simon, who has lived here for six years.

Before the couple established their Ponsonby design studio at the back of Elizabeth’s store Eugenie, on Mackelvie St, the apartment served as Simon’s workspace for his graphic design business.

At the time he was wrapping up his studio, The Wilderness (a collaboration with Kelvin Soh), while establishing the art and science magazine Pie Paper with fellow graphic designer Markus Hofko. They’ve since expanded to include a collection of Pie books, and these days, he also helps Elizabeth with the fashion label. 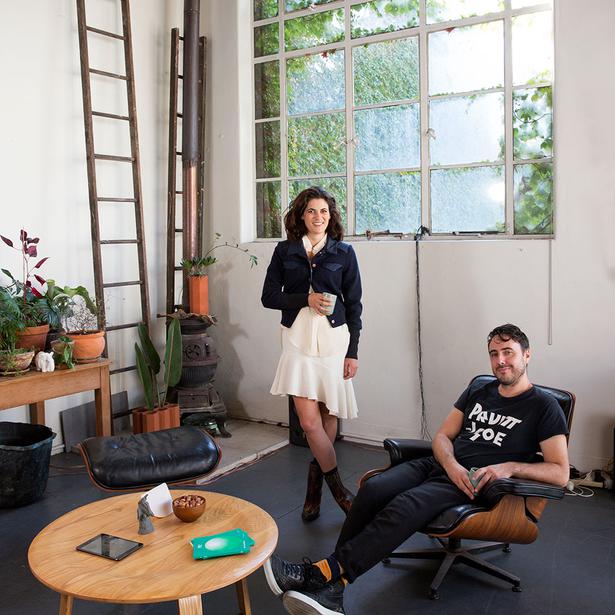 “I used to live downstairs and look up and see these big doors open up into the courtyard,” he says. “There are not many places locally like that. They’ve either been pulled down or renovated to a point of being unattainable. It just had so much character.”

When Elizabeth moved in she used it as a base to launch Eugenie, first setting up her sewing machine in the alcove in the living room. But it was at the kitchen bench where she designed her first two collections, while gazing out over the shared leafy courtyard and that striking concrete wall completely covered in a green vine. Once a year it turns scarlet before the leaves drop off and the dog appears.

“It’s really nice to sit here in the morning and eat your breakfast, it’s like you’re outside,” says Elizabeth. “And I like that you get a bit of the atmosphere of the city but you’re not in the thick of it.”

Essentially, the two-storey rental (with mysterious subterranean levels adjoining the flat downstairs) is one big room, a kitchen-lounge space with a bathroom off it. The high ceiling, iron beams and original windows gives the space a New York loft feel, and the large mezzanine bedroom means there’s plenty of space to hang clothes.

Upstairs is accessed via a steep metal staircase that Elizabeth’s mum often warns her about, and which Simon can slide down in a couple of seconds. The only time he didn’t love living here was when he hurt his achilles tendon — it was just as tricky climbing the metal staircase to the front door.

For an “intense” period of about two years, both of the pair were living and working here. But they’re not the first couple to do so.

“We met an elderly couple who met working here [when it was a hat factory] 50 years ago,” says Simon. “The guy used to shovel coal into the generator.”

Though that piece of equipment has since been turned into the neighbour’s music studio, the apartment still has its original pot belly stove, which isn’t exactly a heat pump as it takes at least an hour to crank up. An old industrial crane is used to hang the couple’s cane swing chair out of the way; when the grand red doors are thrown open on a sunny day, the chair can be lowered into the entranceway. 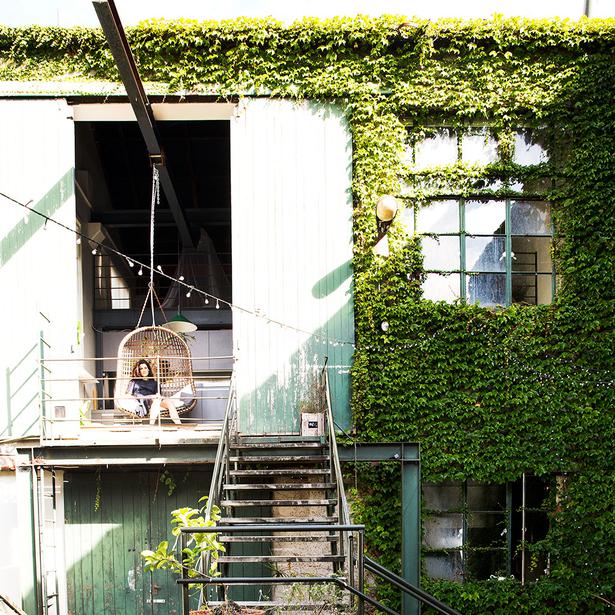 Before they moved in, a stainless steel kitchen was installed; all they’ve added is a few pieces of retro furniture, (including an Eames chair replica they’re looking after), a handful of prints collected from here and overseas and their burgeoning plant collection. There’s no TV but at night, they pull the large blind down over the windows and project films on to it.

“More art would be good,” says Simon, “but plants are a nice thing I don’t get sick of.”

Although most of their creative work happens in the studio, the apartment still acts as a weekend workshop. Today there are plaster scraps around the edge of the kitchen from Simon’s 3D ceramics experiments over the long weekend. A little white elephant that lost its tusks in a fall sits among the display of cycads, monsteria and ferns.

“I want a jungle,” says Elizabeth, who loves pruning the bonsai trees on the front step.

As for this creative couple, there are no plans to downsize.

“I find I get claustrophobic in smaller houses,” says Simon. “Especially bedrooms. I’ve become used to a big open space. If I was to design my own home, it wouldn’t be too dissimilar to this.”

Where to Visit: Precinct 35

This homeware store and cafe has just opened in Wellington

The New Craftsmen is a tribute to artisanal luxury