This Westmere home has a playful attitude. Photo / Emma-Jane Hetherington. There's More Than Meets The Eye Inside This Tranquil Westmere Home

When Ginny and Dave Openshaw rather belatedly saw that this Westmere section was up for tender, to meet the deadline they had to register a bid the very next day. "We did something spontaneous," says Ginny, "which is very unlike us."

Well ... not quite. Within 24 hours, Dave — who knows his way around a spreadsheet — had been in touch with architect Tim Dorrington of Dorrington Atcheson Architects who, overnight, turned out a quote for a home of a certain size and specs.

READ: Inside An Orakei Home With An Enviable Outdoor Space

Armed with this data and a fair few numbers of their own, the Openshaws arrived at a figure — and won. The icing on the cake is that the budget, set in haste, was almost exactly on the mark. 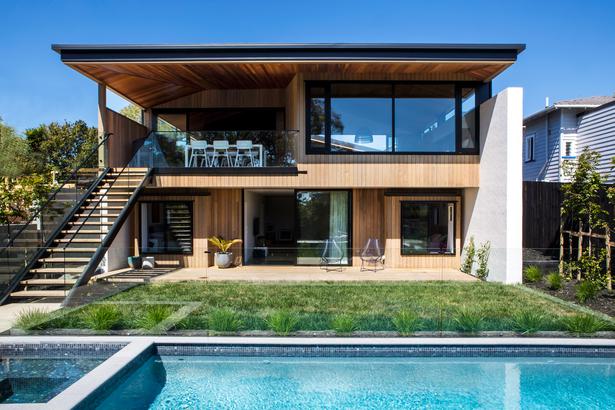 From the street, the peak of a hip roof can just be seen behind a wall of vertical cedar. The roofline echoes that of the character houses in the vicinity and the façade is low-key, unremarkable.

"We didn't want to make a statement; we wanted minimal impact on the neighbours," says Dave.

That said, Dave is a marketer. He knows the value of a subtle start and of surprise. It's something Tim Dorrington does well. He is a master at creating an architectural journey. 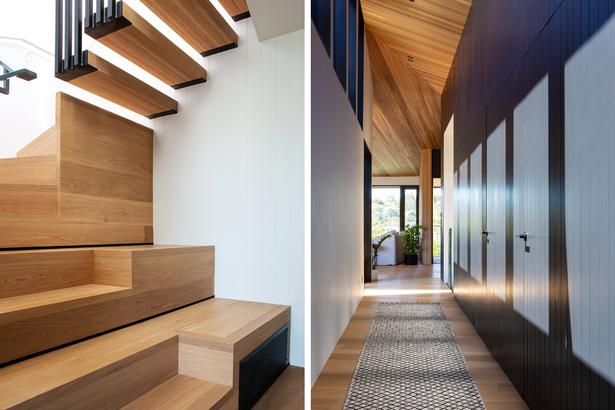 Left to right: Sculptural timber stairs float down from the upper level. A line-up of doorways hidden among tongue-and groove panelling in the hallway. Photos / Emma-Jane Hetherington.

So the narrow garden pathway and average front door speak little of what is to come. But step inside the entry hall and suddenly the experience expands into space.

It's the ceilings that do it. Clad in cedar, vaulted, twisted and rising to 4m above eye level, they are the dimension that turns this home for a family of four into something special. "Everyone who comes around says, 'We want your ceiling'," laughs Ginny. An unusual compliment but they'll take it.

Of course they aren't the only moment of magic in this two-level dwelling: there is plenty more that visitors comment on. A view into the main room from the internal courtyard showcases the nature from the park. Photo / Emma-Jane Hetherington.

They may be confused by the line-up of rooms hidden behind tongue-and-groove panelling in the hallway (one is the hard-to-find guest loo, another the guest bedroom) but they're pretty certain the internal courtyard is a covetable "love to have".

The upper level of the U-shaped home contains a master bedroom and the kitchen/dining/living zone, which wraps around and opens into, this patch of green. "That was Tim's idea. We would never have thought of carving a bit out of the footprint to create it," says Dave.

It has meant the indoor living room is smaller but the couple have no regrets. This pocket of garden is a sheltered spot that allows light to penetrate the core and the deck with a fireplace is a favourite spot to gather for evening drinks — right into the early winter. 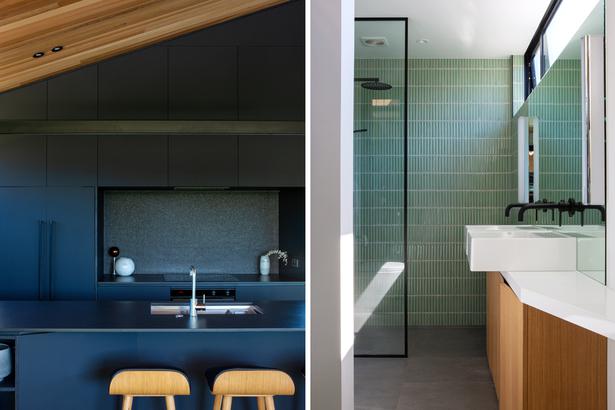 Left to right: The all-black kitchen with a splashback of tiny mosaics. The relaxing bathroom. Photos / Emma-Jane Hetherington.

While adults are well catered for and might appreciate the nuances in the material palette — how the cedar in the ceiling and on some walls has textural and tonal differentiations (from raw and rough to flat and stained) — the design also has teenagers front of mind.

Although the couple's two children Sam, 12, and Sophie, 9, have yet to reach this milestone, the future is well served with a downstairs level devoted to playfulness.

READ: Why Colour Is Key To This Award-Winning Freemans Bay Apartment

Both their bedrooms open on to a heated pool and a shared rumpus room means space for mates and pizza parties. 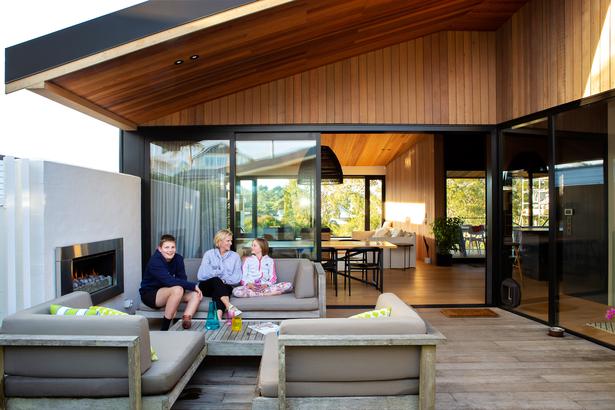 Upstairs, the atmosphere is more subdued. The section slopes down to a reserve and overlooks a tableau of trees and houses on the hillside opposite. It's a quiet yet interesting view and the minimal yet relaxed style of the interiors suits it well.

The all-black kitchen features a scullery for easy entertaining and a splashback of tiny mosaics. "I originally wanted travertine but couldn't source it on time, so at the last minute went with these tiles, which are recycled from parts of computers and CRTV screens," says Ginny.

Ten months down the track, once builders Senior Construction had secret-nailed the last cedar board into place, Dave consulted his spreadsheets and, lo and behold, there were still funds in the kitty for furnishings. No surprises there. 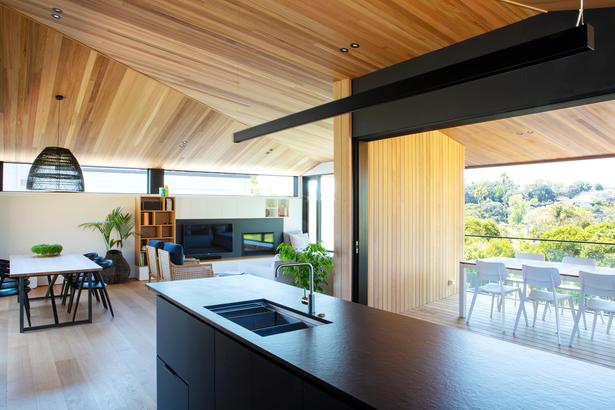 "Everyone who comes around says 'we want your ceiling'." - Ginny Openshaw. Photo / Emma-Jane Hetherington.

The couple enjoyed buying everything new "apart from a few beds" and pieces key in holistically with the black/white and timber theme.

A dining table, made by architect Sam Atcheson, has an oak top that ties in with the flooring and an industrial base of gunmetal steel.

Colour impact is delivered through art — and, yes, there is a still-in-credit line on the spreadsheet for that.

Meanwhile, the couple is happy enough with what's naturally on offer. The way the park greenery, borrowed as their own, slips through the seasons.

The way light reflections from the pool dance across the angled ceilings. "It's a beautiful home," says Dave. "We should never have any reason to leave."