Claire McCall and sustainability have been rather intimate of late. As author of Green Modern - part design inspiration, part practical guide to building a more eco-conscious home - McCall showcases a heady dose of green inspiration from across New Zealand.

With stately South Island abodes, weekend boltholes, remote island retreats and intelligent city apartments, the book encompasses all manner of residences. It doesn't ask that you sacrifice luxury for more sustainable living, rather it encourages more educated decisions and creative solutions, so you can do good by the clean, green national image.

Sophie Burton talks to the author about dream homes, "arcology", a greener concrete jungle and how to easily embrace a more sustainable way of living.

A large number of the homes in Green Modern are first and foremost luxurious spaces to be lived in sustainably without resorting to, as you say, living in a grass roof mud hut. Do you see this idea as one of the biggest selling points of your book?

Green Modern was never designed to be a "worthy" book on sustainability in architecture, filled with didactic prose about over-consumption of the Earth's resources. Neither is this a comprehensive "how to" guide. Because I write a lot about contemporary architecture and design, I wanted to showcase contemporary architecture and design, that also considers green design foundations. I wanted to start a conversation, and encourage thinking on how we design, build and renovate, the small or significant decisions that we can make to be more "green". And the aim was to show that there need be no sacrifice in terms of aesthetics in order to achieve this.

What is your interpretation of the word "sustainability"?

Sustainability has many faces. Most people hear the word and instantly think of the eco-friendly aspects. I chose to call these homes eco-conscious, because inherently, the very act of building uses up a little more of the Earth's resources. I looked for houses that spanned many situations. Some were examples of sustainability in the urban environment (such as the apartment built in "dead" space above an existing carpark right next to the Symonds St off-ramp).

There are also homes that exhibit a great deal of sustainability in the energy (or lack thereof) they consumed, as seen with several off-the-grid beach houses. Others showed the possibilities of adaptive re-use. There's the house built out of High Cube shipping containers and the Waiheke escape, a clever repurposing of two existing cabins.

I also looked at the idea of financial sustainability, in which the owners of one residence had saved for decades in order to build, rather than taking up a huge mortgage. When you start to dig deeper into what sustainability means in terms of home design, you realise there are so many facets to be explored. 
Outside New Zealand, what architect do you most admire for their sustainability focus?

British architect Norman Foster has been a proponent of sustainability for decades and one of his company's most ambitious projects is an "arcology" - a term coined to describe where architecture meets ecology - funded by the Abu Dhabi Government. His arcology is called Masdar City, and is billed as the world's first zero-waste, zero-carbon city, built on a square kilometre of desert. The plan involves no petrol cars, rather electric vehicles that are run in specially designed tunnels - ironic for an oil-producing nation.

Some of the city is already built, but its completion is a long way off, as far as 2030 potentially. The ideals it embraces are of the highest-minded green design - so, of course, it's proving expensive and it has its detractors. I think it's a fascinating project and Foster and Partners are destined to be seen as pioneers of the concept. The bonus being that the buildings are architecturally interesting and beautiful so I like that it's a city that has design-led green principles.

Where did you find the inspiration to produce Green Modern?

Well, it's everywhere! Climate change is no longer disputed, so conserving our resources while trying not to produce so many greenhouse gases is now practically a mainstream philosophy - or at least it should be. In New Zealand at least, you don't have to look far for ideas. There are creative individuals who are exploring new ways to build with less impact on the environment. Architects are finding innovative ways to use existing products (such as the super-insulated, inexpensive SIP panels once used only in coolstores) and furniture designers are creating covetable pieces by working with recycled materials or sustainably grown timbers. In your opinion, how is New Zealand stacking up on a global platform, green building wise?

I think we're doing our bit, but as a country that trades on its "clean, green" image, we could do so much more. We cannot simply assume the government of the day will take the lead in this. Nor can we rely solely on architects or designers to push the agenda. There has to be some personal responsibility.

What were some of the highlights and lowlights that stood out during the process of compiling this book? A personal highlight for me was getting into debate and discussion with the design profession about how much we are doing, what we should be doing, and why it's important to think sustainably. It was interesting to learn of how many grey areas there are. For instance, few would argue that concrete is a sustainable building material because it takes so much energy and resource to produce.

But then a concrete floor or walls offer the opportunity to create thermal mass, which reduces the energy required to heat a home for a lifetime, so... it's a conundrum. A lowlight was having to pick and choose - there just wasn't enough space to include all the deserving homes I came across during my research.

What is the architect's role in the sustainability conversation?

Like I say in the the chapter Green 101, it's not rocket science. Orienting the house correctly on the site and designing it so that it captures the most sun is the baseline. And architects should also initiate the "big picture" discussions with their clients. For instance, asking "how much space do you actually need?" It's also the architect's role to feed in ideas about particular products that are more eco-friendly - from thermally broken aluminium joinery and so on. City living can so easily become unsustainable and transient. What are some of the greatest challenges cities face when encouraging home owners to build green in a concrete jungle?

The unshakeable Kiwi "dream" of the quarter-acre section is one handbrake to our cities flourishing in terms of good design. But, the practical reality is that New Zealanders are going to have to learn to live in more densely populated environments. It's not a compromise, it's exciting. Compact living can be luxurious. Apartments in the city offer such amenity and good design can make them wonderful spaces to be.

I think the rules that govern their size could be looked at (a studio in Auckland still has to be only 35sq m to get planning permission). Encouraging a sense of community to flourish within the apartment blocks is one aspect that should be explored. In Sophie Wylie's apartment (page 156 of her book) there's a laneway that divides her block from another. The neighbours often get together and hold street parties here.

Green Modern includes plenty of realistic suggestions for minimising the environmental foot print. What are your top three tips?

• Replace any light bulbs that blow with an LED one. They are more expensive so you won't want to do them all at once, but they last about 15 times longer. One I just bought came with a 10-year guarantee! Not sure I'll ever call on it, but it's a good selling point. Fluorescent lights contain mercury (a toxic chemical that is hard to dispose of) so better to avoid those.

• Help the honeybee by mass planting single-flowers species. I'm not a great gardener, but I've planted salvia (a type of sage) with a blue flower which they love. The first month I planted I actually saw bees in my garden for the first time in forever.

• Good insulation. It's not sexy, but can make the biggest difference. 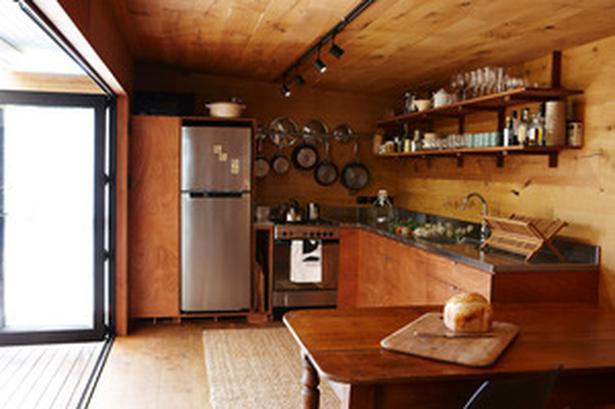 Your own home is an existing structure - what changes would you like to make to be more green?

The house I live in is what I like to call an "urban bach". It has a monopitch roof, the type of casual planning that belongs beach side (unfortunately no beach at my front door) and a sleep-out that echoes the weatherboard and Zincalume cladding of the main house. It was built in 2003 and is designed and oriented perfectly to capture the sun. It has lovely wooden louvres that allow natural ventilation which is so important in keeping the home healthy.

But it can be cold so I'd love to install double glazing to trap the heat in the evening. The sleep-out also has a sloping roof that would be perfect for solar panels. And, I have a concrete-pad "deck" which I'd like to transform into my own version of The Crack Garden. The Crack Garden was a project in San Francisco that cost only $500 but transformed a communal area that was searing hot in summer into a more sustainable environment.

They used a jack hammer to create channels in the concrete and then planted in the cracks. Making the surface more permeable would mean less run-off to inundate the storm-water drains and by retaining the concrete, less hard material to landfill. Genius on many levels.

Everyone has a fantastical home in their minds, what would your dream abode look and feel like and where would it be?

It would look and feel like it could be in Palm Springs, yet would magically manage to nestle discreetly into the environment of an East Coast New Zealand beach. I'd love an authentic mid-century masterpiece designed by one of the greats - Neutra, Eames or Wexler will do - that has stood the test of time. Of course, it would need to be retro-fitted with double glazing and properly insulated. Throw in a bit of crazy paving around a pool in a central courtyard and I'd be in heaven.