It takes an artist's eye to see a choreographed dance in the act of pouring concrete. Hard hats and steel caps, flexi-pipes and formwork are the unremarkable items that inspired Teresa HR Lane's imagination when she took on the role of project manager on the build of her new family home in Freemans Bay. Power and vulnerability were the bigger themes explored in a series of works this recent Elam graduate entitled The Might of Meekness.

"There I was sitting in the middle of this madness on a building site waiting for 'the pour'. There were people hanging off structures, screwing and shovelling, pushing and shoving. I started taking photos not knowing where it would lead me."

A sell-out exhibition of drawn and painted works on plywood was the end result of these observations - a bonus outcome of the design-and-build process. Not many homeowners declare, at the end of a project, as Lane does: "That was great! When do we do the next one?"

When Lane and her husband, an engineer, took the step to sell their double-brick Mt Eden villa and build, it was an impulsive decision.

"We saw this ridiculously steep site tucked down a driveway and thought 'why not?'" Her hubby turned out to be a master of understatement when he speculated: "That's my area of expertise - how hard can it be?"

One 50m retaining wall and 100 truck-loads of fill, manoeuvring perilously through the cart-wide back streets of this city-fringe suburb, was the first measure. Dealing with council requirements in a heritage area with Residential 1 zoning was the second.

The couple had vivid experience of the cold, draughty villa they had left behind and wanted somewhere warm and low-maintenance with a separate wing for their two daughters (aged 13 and 11) and a studio space for Lane to pursue her art. They liked the solidity of concrete and its raw beauty. "We wanted a house that honestly reflected the materials it was made of." 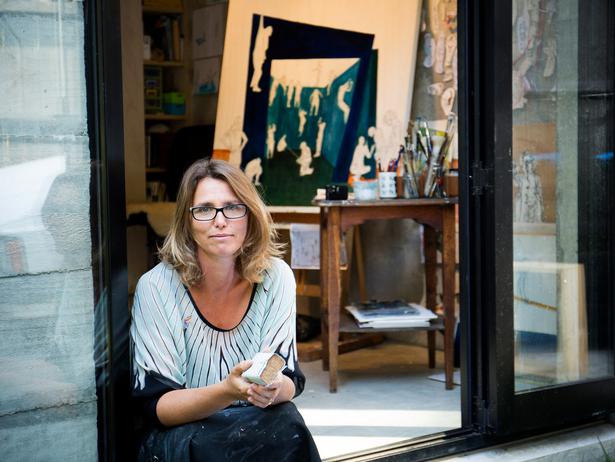 They were also eager to explore the challenge and the perceived cost-effectiveness of in-situ formwork, rather than using tilt-slab construction. Tim Dorrington of DAA Architects was commissioned for a scheme that began as a simple plan: two structures linked by a double-height atrium and a bridge that floats through the space to connect them.

Dorrington devised a brutalist composition of concrete, steel and glass that nevertheless gives an architectural handshake to its colonial neighbours. Horizontal texture on the precast walls echoes the linearity of weatherboards while the roof, styled as a Dutch gable and clad in steel, is conceived as habitable "attic" space that makes reference to the dormers of Victorian villas.

Though the palette is strong and industrial, whitened-ply ceilings and a cedar-wrapped insertion that houses the garage but curves into the living room lends softness and give. In the kitchen, a wall of cabinetry in black-stained particle board flows around a powder room and coat cupboard, while lowered ceilings bring an intimate counterpoint to the volume of the atrium.

"We have no street frontage and not one of our neighbours objected to the design," recalls Lane.

Getting the plan through council was a different story. Lane, who was in her final year as a mature student at Elam, had to switch focus between the ethereal, conceptual nature of her learning, to the red-tape reality of consent.

Thoughts of a "fanciful life of study" were abandoned to attend hearings and make the compromises that allowed them to continue with their plan. "From an artist's perspective, it made me realise the subjective nature of aesthetic," says Lane. "There's no right and wrong. It's all about what's in favour by the people in power at the time." Just as Lane was nearing the end of her four-year degree, her husband gave her the news that he was too busy to oversee the physical build - she'd have to take on that role, too. So she immersed herself body and soul into a world inhabited mainly by men. In tandem with builder Hayden Anderson, she worked with the team, shaping the home like a brigade of potters.

She's never looked back. Her eyes light up as she explains the make-up of the material that was used: a sandwich of insulation, woven steel and concrete. "You pour the concrete into a mould so, in fact, you have to map out how to build the reverse of the house."

The anxiety, excitement and energy of the day of the pour - this "concrete fever" that rises from the knowledge that things can go really well or, should one form blow, rather badly - is still freshly etched in her mind.

Sitting in her studio, Lane runs her hands over the patina of the interior walls. Their smooth, shiny imperfection is in contrast to the roughcast shuttered nature of the exterior. Such textural juxtaposition is reflective of the process: that dirty, physicality of building that can also have its quieter, delicate moments.

Unexpectedly, in overseeing the job, Lane found her muse - indeed, a squad of them. Using the photographs she'd taken on site, she then etched their forms in ink, pencil or digitally. Then she prepared to transfer these to canvas. Since her budget was stretched, her foundation, instead, became pieces of plywood, donated by the building supply store where the couple had their account. "They were ex-packaging material, and all scuffed and bruised."

Lane liked the link this had with construction and that she was putting waste to good use. So she sanded the pieces - a "cathartic, repetitive process of getting to know each piece" - then whitewashed them so the swirls of the grain became barely perceptible. Lane's art expresses not only the brute force of the co-ordinated theatre of a concrete pour but other aspects of the personalities she grew to know and love. There are pensive moments where the man the crew dubbed "the concrete pirate" stands in his eye patch, dungarees and gumboots, and while others stare thoughtfully into the hole that was to become the footings for a concrete spiral staircase.

There's playfulness, such as the painting where two builders tiptoe across a pond of concrete, delicately transporting the project manager's handbag to safety.

Now settled into her home and her theme, Lane has been asked for more works of a similar sort for an exhibition at the Milford Galleries in Dunedin. This will take the form of larger pieces that marry painting and drawing. In ink and acrylic, and presented on plywood with mitred edges, her tentative title is: Men at Work. "The archetypal idea of builders is of them standing around smoking a fag, but there's so much more to it than that. These paintings celebrate their extraordinary strength and humbleness."

• See Lane's work at teresahrlane.com and watch out for her exhibition on April 15 at Milford Galleries, milfordgalleries.co.nz

Harnessing The Power Of Scent To Energise Your Home