For the award-winning New Zealand architect, beauty can exist in the most unlikely of spaces Setting out as an architect in her 20s, Lisa Webb fantasised about designing large, open-plan houses “so you could have 100 of your close friends over”, she laughs.

“Then you have kids and spaces that are big and noisy. Suddenly you realise what people think they want is not necessarily what they enjoy.”

These days she is more considered about creating spaces that cater to the sometimes conflicting needs within a household.

She references her parents’ 1970s house with its formal lounge, where they’d go to have a quiet drink and pretend the rest of the place wasn’t messy.

It’s also evident in the Westmere house she designed for her own family to live in. Its moderate 145 sq m footprint includes two living spaces, one of which was originally conceived purely for her son’s Lego.

Lisa’s design was recognised at last year’s New Zealand Institute of Architects (NZIA) awards, entered through her practice Studio LWA, with judges praising her astute use of what many saw as a B-grade site.

The house won a New Zealand award for architecture, and was a named winner of the Sir Ian Athfield prize for housing, the top gong for residential architecture in the country.

Her house fits discreetly on to subdivided land, and while its exterior blends with the neighbourhood bungalows, inside it cocoons the family with what Lisa calls a “darker complexity”, natural light falling dramatically through its strategically placed skylights. 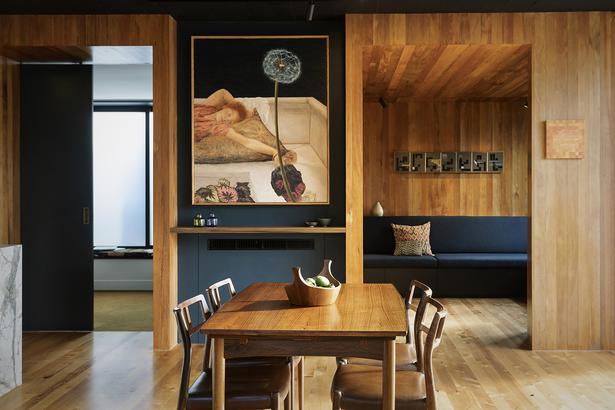 Executing small housing well is a subject Lisa has thought hard about, ever since she and her family were renting on the same street.

That bungalow was big and cold and draughty but they had acres of land around them. When the “handkerchief” 232 sq m site over the road went on the market, Lisa knew they could achieve their dream to build.

“The first time we brought our kids over, my daughter burst into tears and said, ‘You can’t build a house here!’”

Balancing the constraints set out by Auckland’s former District Plan, the Unitary Plan, and additional covenants the vendors had put on the property to do with drains and driveways, the house is now being held up as an exemplar for future Auckland intensification: a warm, serene, dynamic family home on an otherwise dormant pocket of land.

READ: Inside A Stunning Waiheke Home That Appears To Float Above The Water

“I’m not saying infill housing’s the answer but it has to be a part of it,” says Lisa. “And I think we have to think more cleverly about how to do it. Dealing with a site on the ‘wrong’ side of the street or that’s been written off doesn’t mean we can’t do something valid and interesting and live well in those spaces.”

New Zealand already has a history of building small houses, ever since the war generations dealt with a rationing of materials. Bigger was deemed better in the 80s and 90s, and now, we’re increasingly seeing the benefits of reining footprints in again, from the environmental to the economical and philosophical.

“Houses don’t have to be large — just thoughtful,” Lisa agrees. “All the spaces [in the Westmere house] are a little bit smaller than you’d like them to be but they still function, they still provide amenity to us. It’s a delight to live in.” 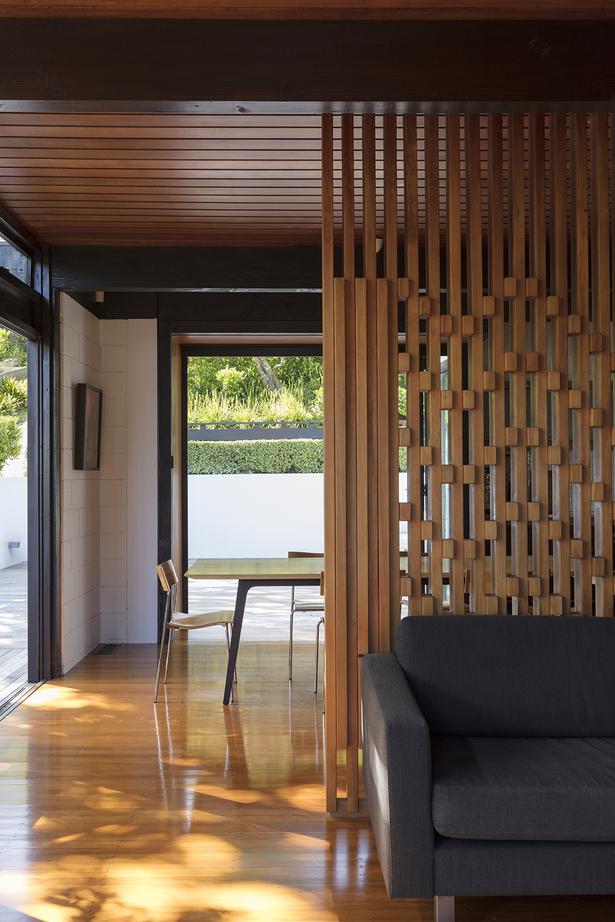 You’d presume a feature such as an entry, for instance, might be scrapped when space is tight but Lisa was determined to create a sense of arrival. Add to that the Japanese-style stone slabs leading to a distinctive wooden door with a dimpled facade — created by a carpenter chipping small divots with an adze (an axe-like tool).

“Because it’s been hand-carved it has that tactility,” she says. “It immediately draws you in — you want to touch it.”

These features are the first of many “emotional” decisions Lisa made with regard to the materials, from the home’s extensive use of textured timber to a contrasting modern marble bench in the kitchen.

“Because it was our house, I was thinking about what it is to be a New Zealander, through the materials. What was emotionally resonant to us?”

READ: This Clever Petone Home Is A Marvel In Small-Space Living

The rimu timber comes from logs removed from the Kahurangi forest in the South Island, after Cyclone Ita devastated the region in 2014, solving the philosophical conflict of trees’ value, and whether they should be deliberately felled.

Boulders taken from a river were sliced into tiles and used on the entrance floor and bathroom. PV panels were installed in the roof so the house could generate its own electricity. The issue of sustainability has increasingly become more of a priority in her work, says Lisa.

“It starts with thinking about simple things like warmth and size, generating electricity, conserving waste and recycling, water use, washing lines, and gets more complicated — embodied energy, carbon, natural or sustainable materials versus performance… the industry has a lot of work to do.” 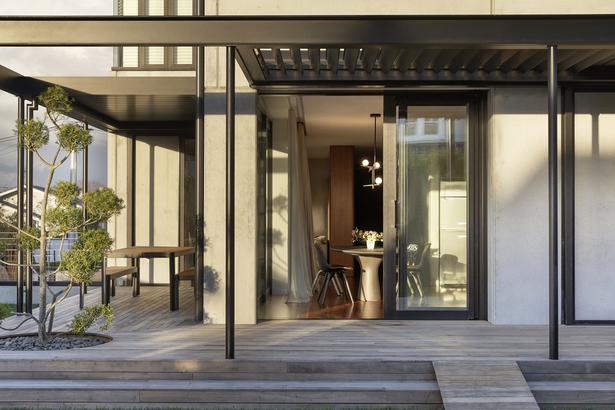 The exterior of the L House. Photo / Sam Hartnett

Reflecting on what it means to be a global citizen was another consideration, hence the home’s subtle Japanese influences, inspired by an unforgettable, somewhat spontaneous trip to Japan Lisa took with her husband for a friend’s 40th birthday.

“We stayed in this amazing traditional hotel in Kyoto. We just sat in this beautiful Japanese bath with little oranges bobbing around, surrounded by beauty. And it had a really profound effect on me.”

Perhaps a subconscious appreciation for Japanese architecture had also been stoked earlier by the late Ron Sang. Renowned as New Zealand’s pre-eminent modernist architect (and the mastermind behind Titirangi’s famous Brake House), he was also enamoured with Japanese design.

Ron and his partner Margaret became friends after Lisa’s parents commissioned him to design a home for them in Pakuranga, overlooking the water.

“We moved into this amazing house from a very mediocre one,” says Lisa. “So I had this transformative experience.”

She fondly recalls the dinners Ron and Margaret hosted. Ron was born in Fiji to Chinese immigrants and would serve his favourite steamed wontons and bhuja peas to nibble on, as they sat and talked, surrounded by his ever-growing art collection.

“Ron opened this world of opportunity to me, this way of thinking about life and living. I announced to him at the age of about 7 that I wanted to be an architect. He was incredibly supportive.”

When she was a bit older, Ron took Lisa with him to the office one day, so she could see what went into the life of an architect. “I tell everyone that story because if a young person comes to you, take them seriously. It literally changed my life.” 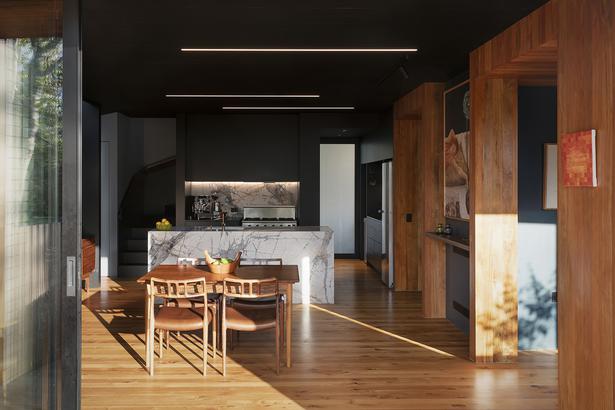 “All the spaces [in the Westmere house] are a little bit smaller than you’d like them to be but they still function, they still provide amenity to us. It’s a delight to live in.” Photo / Sam Hartnett

An understated aesthetic is also apparent in a Studio LWA property known as the L House. The owners had found Lisa through an open home for a house she’d designed for her parents.

“They were also responding to what they described as a Japanese sense of space,” she says of the private hideaway with concrete exterior, Zen interior and Japanese garden.

Coincidentally, Lisa is now working on a renovation on Hapua St, in the same architectural enclave in Remuera where Sang himself once lived.

The 1960s house was designed by Geoff Newman for the QC Sir Peter Williams and his wife and is now home to a family who first worked with Lisa 12 years ago.

“The first stage back then was about opening it up, and making it into a family home, but thinking very carefully because it was so rigorously designed, with very clear language and a way of constructing everything that made it very difficult. Now, we’re coming back to develop it for a growing family, with a work-from-home study.”

For the rest of the year, Lisa will continue what she refers to as her “practice of two halves”, a combination of renovations in Auckland, and new builds in the South Island, including a ski chalet at Castle Hill.

She’s also working on the rebuild of a house she designed in Lake Ohau, one of 48 houses that burnt down during the catastrophic fire of 2020. The project is set to appear on the New Zealand version of Grand Designs.

No matter the job, the dream Lisa had as a 7-year-old is now something she gets to experience daily, not only in the spaces she’s designed for her clients, but within her own home.

“There are two ways to live — the space around you can be standard or it can be elevated,” she says. “It can give your life that sense of beauty or excitement, even to stop and look at something as you’re walking up the stairs or to notice how the sun is falling on something. Ordinary, or extraordinary!”

Richard Naish, founder of RTA Studio, designed this getaway abode for an ocean-loving family is a charming nod to a traditional...