For the Sydney-based New Zealand duo, designing a sumptuous property requires a little smoke and mirrors It’s not all glitzy penthouses, mega-mansions and indoor pools. Luxury can be quiet too, peaceful as a church. Take the 1860 house known as the Country Residence in Australia’s Southern Highlands.

The former rectory has undergone an extensive renovation by architects Bianca Pohio and Chris Adams, a Kiwi husband and wife team who specialise in high-end residential and retail design through their Sydney-based architecture practice Pohio Adams.

Grounding and earthy with a combination of corrugated iron cladding, polished concrete floors and textured timber, it’s not completely unassuming in that it’s a holiday home, situated among sprawling parklands once owned by David Jones’ family.

But its facelift and extension respect Australia’s strict heritage regulations with an understated shed-like addition that’s subservient to the original stone building. 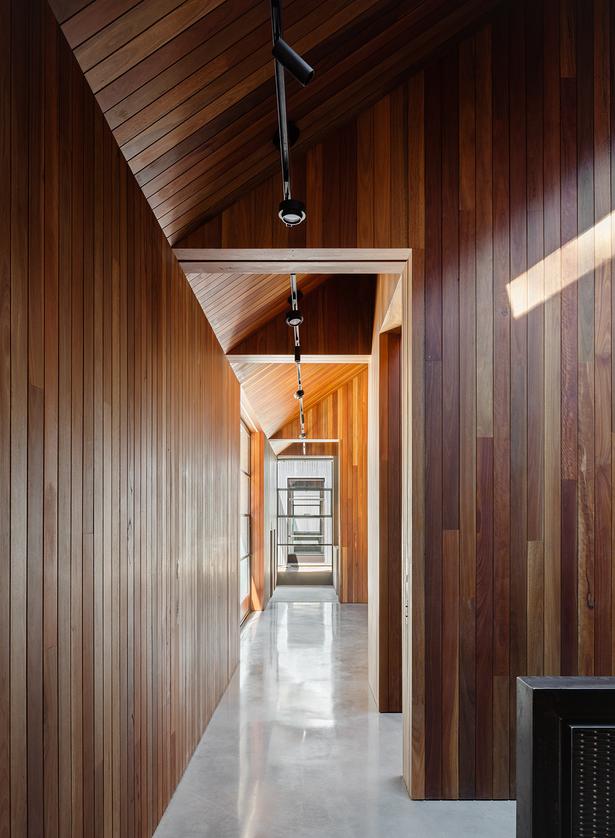 The architects were behind the extensive renovation of a former rectory in Australia's Southern Highlands. Photo / Supplied

“It’s incredibly robust and humble in its materiality,” agrees Bianca via Zoom, as she and Chris drive across Sydney, having just met with a prospective client. “But it’s a fabulous, rich experience to be in it.”

Even with its modest budget (relative to much of the work the duo take on), it’s nonetheless a stunning example of modern luxury. The interior is devoid of chip or plasterboard, instead lined with timber and Venetian plaster.

Timber and stone were chosen for their ability to patina, so the house grows more charming over time, and its grand rooms, high ceilings and wood detailing call to mind, well, the divine.

READ: How Martina Blanchard Transformed Her Queenstown Home Into A Modern Alpine Retreat

“It’s quite extraordinary what goes into a house, in terms of the systems and the types of materials we use, the level of detail,” says Bianca. “It’s often all about what you don’t see. It’s a sense of ease and flow that feels effortless and serene. But in fact it’s a highly polished, functional machine, almost the illusion of simplicity.”

Ironically for a couple who “live, breathe and eat” architecture, Bianca and Chris met while in their early 20s, on a beach. Chris was working with New Zealand architect-in-New York David Howell, who eventually encouraged them to make the jump to the Big Apple. While they each went to work with architecture firms in New York, the experience opened their eyes to the world, says Chris, with international design fairs on their doorstep, and access to sky-high budgets and design ideas.

When they did eventually decide to return to this part of the world, Sydney felt sufficiently international. They set up their practice in 2003 and there’s been no shortage of work since, hence the need to multitask today’s chat.

After starting in high-end retail, it’s now mostly residential projects that keep them busy, the result of Covid, says Bianca, and the (until recently) rising property market.

Should this latest client come on board, they’ll spearhead a large-scale renovation at a house in Castlecrag, alongside their other current projects in Melbourne and Perth.

They’ve also recently returned from Auckland, where they checked out a potential renovation on Waiheke Island.

Their work in New Zealand goes way back, as Bianca and Chris designed the retail fit-outs for Workshop’s stores throughout New Zealand (and in Melbourne), along with Kate Sylvester’s Broadway and Teed Street stores, one of which was designed while travelling around Europe on their way Downunder. Whatever the project, clients get the benefit of two heads, rather than one, says Chris, the couple’s occasional bouts of creative friction an inevitable byproduct of working and living together.

“When you can’t see the wood for the trees, or you’re solving a detail problem or a big planning problem, having that other person whose sensibility and thinking you trust implicitly ... really helps the design process and stops you going down silly rabbit holes,” says Chris, who tends to tackle the details, the materials, the execution, whereas Bianca calls herself more of the “broad sweep” designer.

That feedback loop barely lets up, even when they’re at home, having dinner.

“It’s not really something you can just turn on and off,” Bianca laughs. “If there’s something you’re trying to resolve it will eat away at you until you’ve dealt with it.”

One such conundrum presented itself in another heritage home, this time a three-storey, 200-year-old Georgian terrace house the couple renovated in Paddington, where their office is based, and where much of their work requires problem-solving — and celebrating — tight urban spaces. Along with improving the connection to the outdoors by opening up the lower ground floor, the question was how to make the most of a set of “funny old stairs” that caused the home’s six-foot-five owner to hunch while traversing them.

Replacing the original flight with a striking wooden staircase wrapped in a black steel sleeve brought a sculptural element into what is probably the most used part of the house. It also allowed the light to pour in.

“The key was to celebrate what it is to be a stair,” says Bianca. “It’s this space with a fantastic view and it’s bathed in light. It really revolutionised how the whole house felt.”

READ: Where Will Katie Lockhart Go Next? Everywhere

“It’s now the visual anchor point,” adds Chris. “What’s really cool is you come through the front door and framed in an arch is this amazing structure. It clarifies the circulation and arrangement of the house.”

For the renovation of a 1940s home known as the Fairweather Residence, the couple employed another intriguing solution to a space problem, this time carving up a cavernous living room into a dining area and study via a series of open-ended dividing walls.

Stained with a midnight blue veneer, they serve as a counterpoint between the original 1940s house and the new rear extension, a glass and steel “wintergarden pavilion”, complete with circular skylight, that spills onto the garden and pool on the south side of the house. 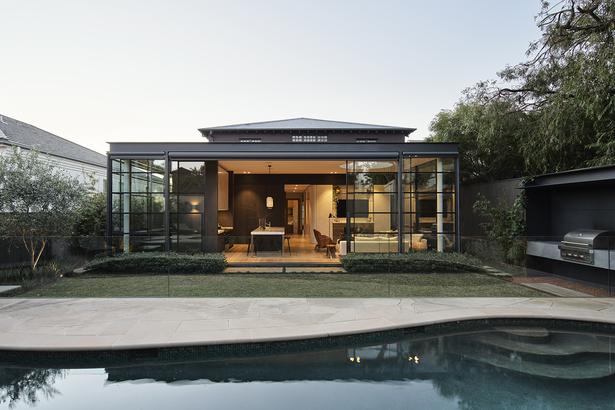 The east-facing pool area on the south side is awash with calming light yet protected from the harsh Sydney sun, its steel and glass extension linking indoors and out. Photo / Supplied

“It’s a lovely space to be,” says Bianca. “Although you wouldn’t intuitively want to be on the southern side of a home, it’s stunning because of the abundance of clear, calming light. In Sydney you don’t want to be in that harsh western light or even too much northern light as it can get too hot.”

As they wait to hear whether they’ll get the green light on the Castlecrag home, there’s little chance this talented duo will rest on their laurels — even on holiday they like to stay engaged, their sight-seeing dominated by design.

Sure, during that recent trip home they visited Bianca’s hometown of Hawke’s Bay and spent time on the beach with their three children, aged 16, 13 and 11.

But Chris says they both hunger to experience architecture, rather than flick through two-dimensional images online, even if that leads to some “mad parent” moments.

“We have a history of holidays that people think sound insane because we’re dragging our children around buildings and to see the Highline in 35-degree heat in New York City — they’re going, ‘If we walk any further we’re gonna die!’ But there’s something so different about consuming an image at a million miles an hour and actually being in a space.”

Bianca agrees. “Equally, being outdoors in nature, at the beach, at an old shearing quarters like the one we stayed at in Waimarama... I need to be in spaces like that to be inspired.”

This story was originally published in volume eight of Viva Magazine.

Emma Gleason makes a case for this classic pattern

For the award-winning New Zealand architect, beauty can exist in the most unlikely of spaces