The art fan's special collection is a diverse display of her family's journey from London to Hong Kong and back home to New Zealand writes, Ginny Fisher

Now, more than ever, artists are counting on online audiences to stay afloat.

No one knows this more than Anna Dickie, content director for global online art platform Ocula, who has been watching the art world morph in response to the Covid crisis.

"Galleries are being forced to engage audiences online and that provides a real opportunity to expand interactions with collectors offshore. Sure, the online experience won't ever completely replace the joy of viewing an artwork in person, but it does provide an opportunity to enjoy art from anywhere in the world."

And when you enter Anna's Auckland villa, the home she shares with husband Sam and their two young boys, that's what you get, art from many corners of the globe.

Throughout the home, artworks are displayed wherever there is wall space — in the childrens' room there's a small Ralph Hotere print, an early Oliver Perkins and a light box by Hong Kong-based artist Nadim Abbas; in the spare room, an Isaac Julien, and a Fiona Pardington in the hallway; paintings also poke out from under beds, they lean up against walls, they are hidden in cupboards — all evidence a passionate collector lives here. Anna's art habit — she is loath to call herself a collector — began 13 years ago when she convinced Sam to buy a print instead of an engagement ring.

"I guess each work is a reflection of a time of life. What I've come to realise is there is a difference between decorating and collecting."

The Jeffrey Harris etching in the family's entrance hall is a monochrome work of a man and a woman facing one another, and in the background, there are two small figures.

Harris, now 71, is a New Zealand artist, whose work often delves into the intimate details of relationships and emotions in domestic settings.

"This work just seems to grow with us," says Anna.

"When we bought the print, I was looking at it through the lens of a young and romantic woman just engaged and embarking on a new journey, but now I see in this work how a marriage is the culmination of a history of experiences and moments. Harris is great at reminding you that all relationships are complicated."

When it comes to collecting, rather than being concerned with big names or art world affection, Anna is mostly fascinated by the brilliant minds of artists and how they see the world.

She pulls out a book and shows me an image of a work by Zac Langdon-Pole, a New Zealand artist based in Germany, titled, Passport (Argonauta) (viii) — she's currently paying off this work in instalments.

It's a small paper-nautilus shell filled with a carved meteor fragment and is small enough to sit in your hand — the shell was sourced from the bottom of the ocean, the meteor from the galaxy — Anna says the duality of the work intrigued her. 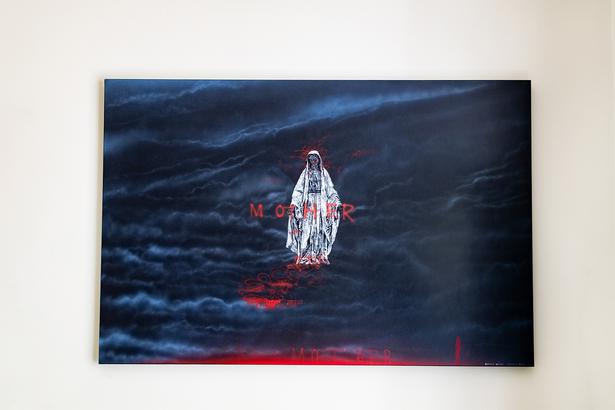 Anna met Langdon-Pole when he came through Hong Kong, where the family was based in 2019 for Art Basel and just after he had been awarded the prestigious BMW Art Journey Award.

"The scope of his ideas completely blew me away. He is one of those artists you listen to, and then walk away seeing things just a little differently."

Paying off art in instalments is just one way Anna and Sam have managed to build their collection.

"We bought our first artwork 13 years ago, and have purchased one or two pieces a year ever since. I have hatched all sorts of plans to do this: from being part of an art group, to buying editions, to finding small affordable works by big-name artists."

She pulls out an envelope from a cupboard and extracts a letter written in blue calligraphic ink that she plans to frame.

It's a conceptual work by Danish-Vietnamese artist Danh Vo, who like Langdon Pole, also uses deceptively simple and found objects.

"White Cube in Hong Kong presented a stark exhibition of Vo's work, and I knew straight away I would love a work by him, but I didn't think I would ever be able to afford it."

Anna then discovered that, for a reasonable price, you could buy a work in the form of a letter written by the artist's father, Phung Vo.

They are not Phung Vo's words but those of Saint Theophane Venard to his own father before he was beheaded in 1861 as a result of his Catholic missionary work in Northern Vietnam, which was, at the time, prohibited. 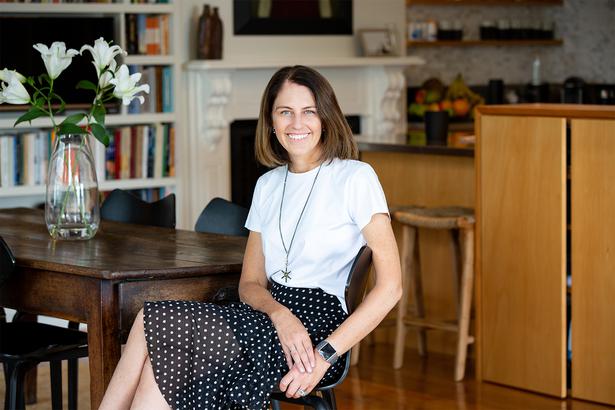 The Francis Upritchard figurative sculpture on the hallway console brings back an amusing memory for Anna about living in London and going to the Frieze Art Fair.

Anna, slightly in awe of Kate, was not very comfortable about it, but when the pair came back from their tete-a-tete, the London gallerist announced to Anna; "Well that's the biggest discount I've ever given."

"Sam was very pleased with himself, felt his contribution to art was done, and has barely set foot in an art fair or gallery since," adds Anna.

Hidden away in a bedroom is a Shane Cotton painting titled Mother, Mother, a Mother Mary figure floating in a nightscape.

Anna bought the work in Hong Kong with an art group that was formed in London 10 years ago.

"I was only supposed to have it for a year, but I've had it for quite a bit longer — that's why I hide it in the bedroom."

It's a work she's grown very attached to and she will be sad to see it go to another member of the group.

"It has the word 'mother' spraypainted across it. I would sit and stare at it while settling the boys to sleep." 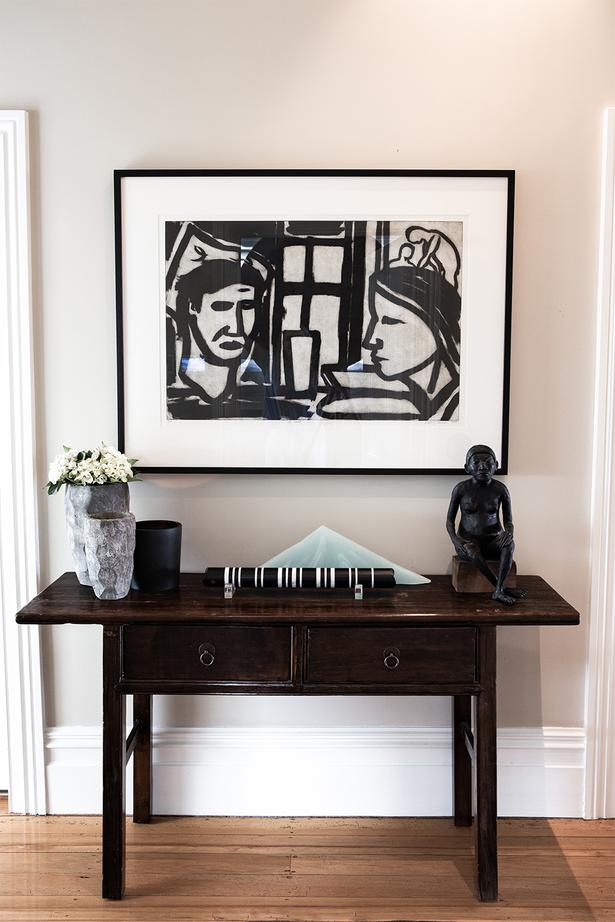 Speaking of family, back in the corner of the hallway Anna shows me a work she bought on behalf of her brother, which she is housing while he moves homes; a small photograph of a seascape by renown German photographer Wolfgang Tillmans.

Anna recalls her brother's disbelief when he saw the work, saying: "But it's just a very, very small picture of water".

Not quite the response she was after.

She explained the work titled, The State We Are In, 2015 was created in response to the refugee and migrant crisis, and so an image of a body of water becomes more than just what you see.

Her brother still remains unconvinced, but she is very happy to live with it for now.

Complex art intrigues Anna and she openly admits Simon Denny's work that sits in their hallway — a plexiglass box covered in indecipherable script and containing an iced cake, completely mystifies her.

"I spend a lot of time trying to work it out. When I listened to Simon speak, I knew his mind was 10 steps ahead and that fascinated me, and at some point I will sit down and do some reading and thinking, and see if I can catch up with him."

Anna's most treasured work, and the most unsettling, is Fiona Pardington's Portrait of a Life-Cast of Matoua Tawai, 2010.

It's a large-scale and powerful photograph of the head cast of a young Maori man, and it's hard to look away.

The deep, intricate lines on the face are the grooves of his Ta moko.

His eyes are closed, yet there is something strangely alive about Matoua.

Anna explains that the Frenchman Pierre Dumoutier made many casts of people living in the Pacific region in the 19th century.

He used these casts to interpret character and intellect on the basis of the now discredited 19th-century practice of phrenology — a kooky pseudoscience that involved the measurement of bumps on the skull to predict mental traits.

The live casts belong to the Musee de l'Homme in Paris and Pardington was given access to photograph them in 2010.

Anna purchased the work when the couple lived in London, but its meaning has become more poignant, in terms of its cultural sensitivity, since moving back to New Zealand three years ago.

In her mind, the body of work raises issues around the colonial objectification of the people of the Pacific, and the irony of her owning the photograph doesn't escape her.

"Owning this work has made me more aware of my responsibilities as a collector. I have an obligation to look after it and to think very carefully about what happens to it when we no longer can."

In her role as content director for Ocula in Auckland, Anna is constantly exposed to the international art world, but says she still has so much to discover.

Although, armed with a Masters in Contemporary Art from Christie's in London, she's in a better position than most to grasp even the most challenging art.

"The course helped me understand that curators and artists draw on this wide well of knowledge that encompasses philosophy, history, film, music, politics, and even pop culture."

As for the future, Anna feels the tide is turning in the international art world.

"We are moving from a Western, white and male-centric art history to one that embraces the many differing histories that exist."

"Art institutions are beginning to address those gaps in how we present history and culture, and shedding light on overlooked and ignored artists and movements. For me, that's really exciting."

Beck Wadworth On How To Succeed As A Businessperson

There’s no substitute for viewing art in real life but organisers of the Virtual Art Fair hope this online initiative will be a...

This lakeside home's pool of character sits high above the water's edge.