The controversial artist likes beauty to come with a twist

Artist Liam Gerrard photographed in front of one of his works at the Sanderson Gallery in Newmarket. Picture / Babiche Martens.

Artist Liam Gerrard, known for his large-scale charcoal portraits, has turned to flowers - as seen on this week's Viva cover. His new exhibition opens next week, portraying tiny, highly-detailed florals. The Elam graduate and former keyboardist for the Veils describes these works as "prettiness on a big, ugly scale".

There are still classic Gerrard quirks in there, however, and a few skulls and animal heads. Traditionally, he drew animals or notable and unusual characters in a blend of realism and fantasy. Think Marilyn Monroe with tusks, Jason Gunn and his puppet Thingee or, most famously and controversially, murderer Clayton Weatherston. Gerrard also likes to depict sport, wrestling and heavy metal stars, genres he lists as his own interests.

His favourite things are scattered through the Devonport home and studio he shares with his father, "like all successful artists", he quips. "What a loser." 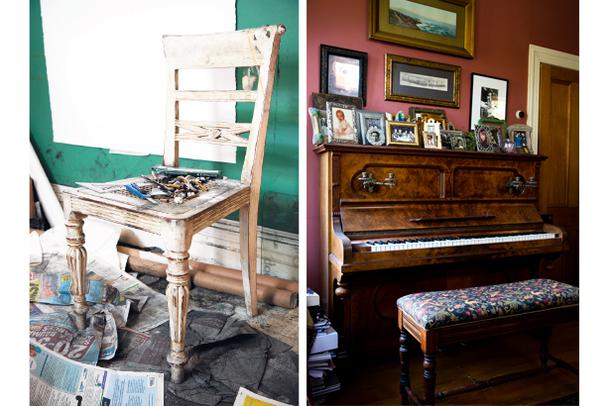 1. Piano
I hated playing the piano for pretty much every one of the 10 or so years I was forced into lessons. I say forced, but I could have quit had I not been too much of a coward to tell my teacher directly. As soon as I managed to stop lessons (my teacher moved to Australia), I started loving it, and remain very thankful for that decade of cowardice. This beast has been around for as long as I can remember, and seems to be locked in a glorious sweet spot of "out of tune but in tune with itself". Gorgeous. Loud. Wooden.

2. Chair
My mum was a creative wizard and relentlessly crafted, collected, restored and beautified furniture, art, clothes and anything she could get her hands on. My studio harbours three items from her "find every antique chair there is and paint it distressed-white" phase.
I think she'd be somewhat mortified with the state of this one, but also thrilled it was playing a part in my creative endeavours - something she always tirelessly encouraged and aided. Plus there are about 20 more around the house in pretty good condition. 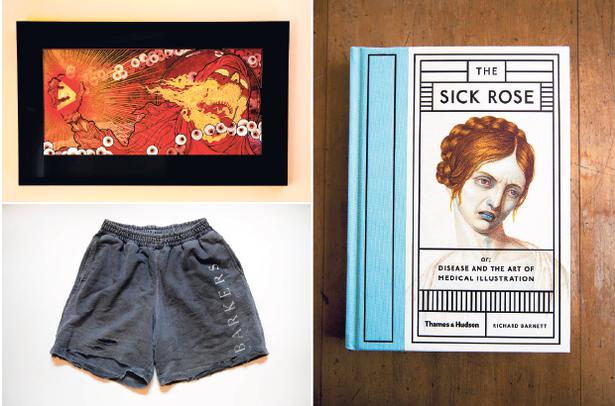 4. The Sick Rose or; Disease and the Art of Medical Illustration, by Richard Barnett
This book rules. Good Lord there's some horrific stuff in it, but it's beautifully put together and the illustrations (collected from a bunch of rare medical books) are magnificent. This was a sensational gift from my girlfriend. It's pretty tremendous when someone realises "old-timey" drawings of people with syphilis is right up your alley, and that they're totally cool with that.

5. Barkers' trackshorts
These are the real deal. An early-90s primary school icon; they remain the standard-bearer in style, comfort, functionality and value for money in a track-short. An absolute must-have for the unpredictable, pressure cooker-like atmosphere of full time charcoal drawing. At least 20 years old, as soon as they begin to show any real signs of deterioration I'll be right in line for a new pair - "same again thanks".