Nikki and Milo in front of one of her botanical still life photographs. Picture / Ginny Fisher

‘It’s all about balance,” when it comes to placing art in your living space, says designer Nikki Willis, “and the proportions and positioning have to be right.”

The large-scale Andy Warhol print in the kitchen area of her newly renovated Mt Eden home is about as balanced as it gets. The gold-toned print, titled Rorschach, is a large scale version of a mirror-imaged ink blot.

Nikki explains the print is named after the Rorschach test — a psychological experiment in which subjects’ perceptions of such inkblots are recorded and analysed to examine a person’s personality. In Nikki’s case, a bubbling creative spirit is obvious, one that’s been useful when it comes to creating her own photographic artworks and dreaming up the interiors of her newly renovated home.

“I’m subconsciously drawn to symmetrical artwork. And if I do hang a piece that lacks symmetry, I’ll position it with other works, to counterbalance it.”

When wandering through the show-stopping two-level villa, which was completely gutted in 2015, it’s apparent Nikki has a love of bold colour and an appreciation for art and objects. There’s a visual surprise in every nook of the house.

“I’m a collector,” she says guiding me down her inky blue stairwell, but “don’t get me wrong, I’m no hoarder!”

She enjoys recycling art, objects and furniture on Trade Me when she becomes tired of them.

“It’s a great way to reinvest in new pieces.” 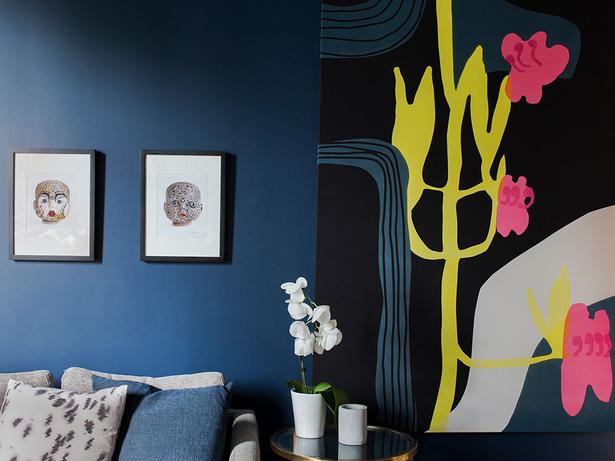 Nikki and husband Matt’s art collection includes many “affordable prints”, but aside from her children’s art, which includes pottery and several rainbow paintings, her favourite pieces are original paintings.

A special piece is a delicate oil by British-born Auckland-based painter Lucy Eglington.

The Dream is a whimsical oil of a whale floating in the stars, with a figure atop tending a camp fire. “I tend to be attracted to the unexpected,” Nikki says.

Speaking of which, a Hye Rim Lee digital print of a pair of Barbie doll-like legs donning high heels in a round frame, was purchased as a gift on the birth of their third child.

“Hye Rim is a Korean New Zealander based in New York and she creates these wacky digital people.”

Nikki has a knack of taking found objects and turning them into artful displays. She found a Japanese silk screen scarf at the Auckland showroom of design duo Douglas and Bec and had it framed. “It adds an interesting texture to the living room,” she muses. The African feather juju hat purchased at Le Forge in Auckland is another example of layering different textures and shapes for interest.

Intriguing objects abound. On the dining table, a row of candlesticks from American-based Jonathan Adler make for a striking arrangement.

“I just love his work, my mother brought me back this brass bird from New York and I have a couple of his bright blue ceramics on the shelf.” 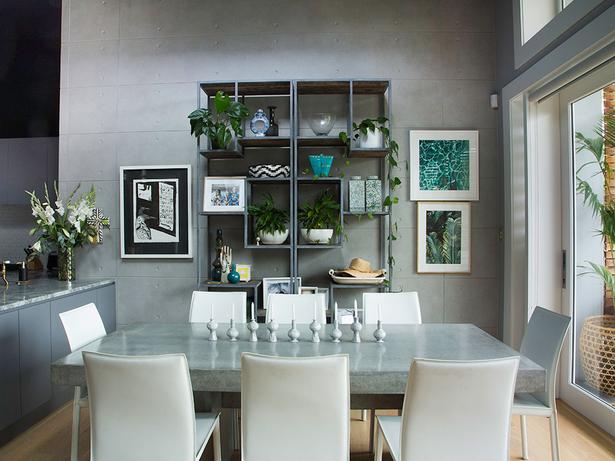 Next to the fireplace sit two huge brass candle holders from American retailer Anthropologie. Brass is an accent Nikki has repeated throughout the house — in the kitchen faucets, the brass clad legs of the island and brass ornaments strewn throughout.

Supporting young artists is important to her, and many interesting photographs and works in the home were bought at the King’s College Art Sale, which she says is a wonderful event to discover new talent.

From a carved wooden feather ornament to a magical photograph of a ballerina shoe pirouetting on concrete, Nikki’s art choices are eclectic and bold, just like her wall colour choices.

In the media room, Nikki tried a dark approach, carpeting the floor the same deep ink blue as the walls and ceilings, which gives the space a cocoon-like feeling.

On the walls, a series of photographed painted doll heads are by young New Zealand artist Olivia Moore. Beside them a large Marimekko canvas pops out from the moody walls.

Another young artist, Juan Mon, a photographer friend, has one of his large works in the dark blue stairwell. It’s a layered photograph of a French fireplace in an old French chateau — a kaleidoscopic landscape of repetitive branches and layers created with digital enhancement.

Nikki’s own photographic artworks have been influenced by similar symmetry.

“I created a series to compliment the villa style — I wanted an elegant image, but it also had to be contemporary.”

She hired a high resolution camera and took still-life macro images of found objects and plants she liked the look of — hydrangea and orchid petals, butterflies, and a small antique, brass dish, then photographed them in the dark enclave of an old brick fireplace in the home they were renting while they renovated. 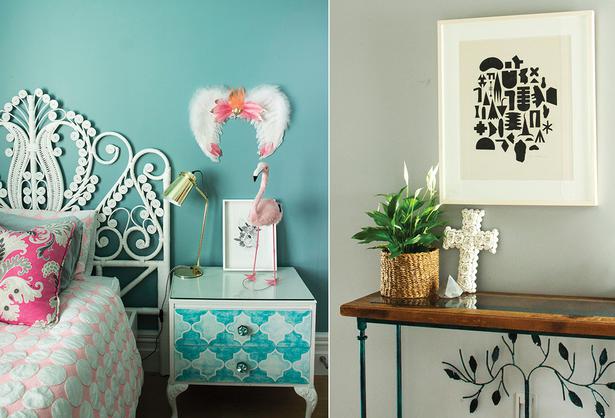 The childrens room; he Mexican console table she bought at age 15 and a Richard Killeen lithograph. Pictures / Ginny Fisher

She took a segment of each photograph and mirror-imaged it in Photoshop to create a prismatic composition titled nature 1 aperture. The series looks at flora in its simplest form, capturing nature’s beauty in a still moment, then magnifying it to a larger-than life print format.

The beautiful teal South American butterfly that provides a pop of colour in these compositions was commandeered by Nikki’s daughter, who also happens to be mad on artistic pursuits.

“Izzy completed at least 200 rainbow paintings at pre-school,” laughs Nikki, and every one had ‘I love you mummy’ written on the back.”

“When I was 15, I spotted this beautiful console from a Mexican store which I just had to have. I spent a large amount on it (for a teenager) and created a Mexican-themed bedroom around the piece. That started a life-long obsession with interiors and furniture.”

She still has the console at the entry to her newly renovated home today.

Nikki’s interest in art and interiors led her to study design at Auckland University of Technology, where she majored in photography.

And recently she has kick-started an interiors business with her sister-in-law, Clara Rollison. They’ve called themselves Two Creative.

Quite fitting for a talented team of two, who are bound to bring creative balance to any job they set their sights on. An art arrangement in the master bedroom includes a circular symmetrical photo by Nikki and a lush blue Monet print. Picture / Ginny Fisher

ARTY DETAILS
• In the living area, Nikki sourced a Japanese exterior concrete composite panel for an interior wall to add texture.
• The high studs could handle a dark, charcoal paint. Nikki chose Dulux “Rawene”. The dark media room was painted in “Poor Knights”.
• Track lighting was vital, so Nikki could aim the lights on her burgeoning art collection
• Hand-painted tiles from Tile Space make the powder room artful and playful.
• A grey mid tone, Dulux “Tirau Double” provides a complement to a wide range of colours in the art collection.

How to Create A Compact Kitchen With Style

These bloggers, authors and renovators show off their stylish lives on Snapchat