As New Zealanders embrace modular homes, Rebecca Barry Hill chats to the founder of one local company building them in style If the word “prefab” reminds you of the dreary classroom where you once flunked French (just me?), a new generation of architectural designs are flipping that idea on its head.

Prefabricated modular homes (that have been built in a factory and transported to a site) have surged in popularity here as New Zealanders, wary of the expense and long lead times to produce living spaces, look for quicker, simpler, more elegant ways to build.

“We did one for someone on Waiheke which was actually a home office situation driven by Covid,” says Isaac Lindesay of Makespace, a modular space company that launched in the last year. “They were a busy family of four who needed a place where they could get their work done.”

Isaac says Makespace aims to complete each home in 12-16 weeks (on top of the roughly two-month council consent stage).

“We like to think we can save people up to 50 per cent of build time,” he says. “Life is getting busier and people need simple spaces they can just escape to and turn off.” Photo / Supplied

The company is also putting paid to the idea that to buy a prefab home means to compromise on style or creature comforts. While the majority of Makespace’s inquiries so far have been for holiday homes in remote or rural locations, Isaac says their architecturally designed, customisable modules appeal to “the next generation of home-buyer, whose life might involve a bit more travel or adventure. But they also have an appreciation for the materials.”

With less in the way of storage than your average home, and a focus on function and energy efficiency over size or splendour, they’re the antidote to a materialistic lifestyle, or people with a penchant for big ceramic cats.

Customers can choose from a one-room sleep-out or office to a multi-module house with off-the-grid power supply. Even the four-module option clocks in at just 108sq m, its footprint reflecting a global shift towards small and simple. And you don’t necessarily need a flat piece of land — Makespace are in consultation phase for a project on Kawau Island where the modules have to be brought in by helicopter. 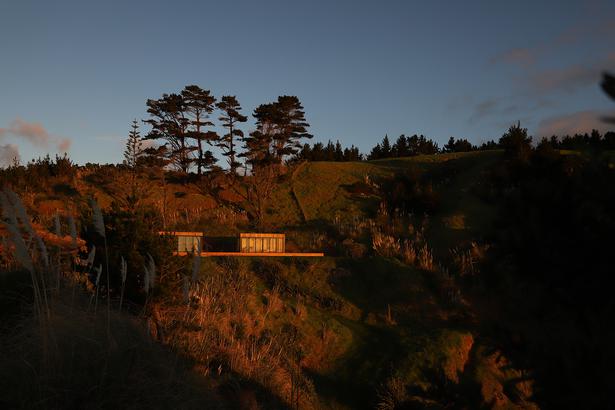 Customers save by cutting down the time it takes to build. Photo / Supplied

Isaac says he’s always been drawn to construction, having grown up with a dad who was constantly tinkering in his toolshed. Fast forward a decade and Isaac got into landscape building work before taking on a product development role; that was when the idea for Makespace sprouted.

“It’s so complicated to build a house in New Zealand,” he says. “It’s crazy what it actually costs to build a house here and how long it takes. I started thinking, ‘there’s got to be better ways to do this’.”

He looked at the US, where he says people are building houses “in half the time, for half the amount”, and started to muse that houses should be built in a factory, much as a car would.

READ: 3 Eco-Homes That Are As Beautiful As They Are Planet-Friendly

In New Zealand it costs, on average, $3000-$4000 per square metre to build, and while being a small economy and population doesn’t help, often it’s the multitude of choices homeowners need to make — from the size of windows and bathrooms to the furniture to fill a house with — that can blow out the price.

Isaac says modular homes eliminate the need for many of those choices; Makespace even do built-in furniture and fireplaces, alongside features that ensure connectivity with the land, such as decks, outdoor spaces and pergolas.

The company charges about $4500 per square metre and Isaac says customers save by cutting down the time it takes to build, by minimising and eliminating any delays or unforeseen circumstances. “We’re building in a controlled environment where we’re not susceptible to weather or other site issues that might happen,” he says. “And it means we can be building the house at the same time as the prep’s being done.”

That means a faster return on investment, so you’re not borrowing for too long before you’ve actually got a house. It also eliminates the travel costs for builders and materials, particularly if the site is remote. Makespace builds its homes up north where they’ve seen the greatest demand, but they’re currently scouring for a factory space in Auckland.

Perhaps the most alluring advantage is the option to move a home if a life situation changes, or you want to purchase a different piece of land.

“You can just pick it up and put it on the back of a truck,” says Isaac. “There’s a lot of value for people who might want to put their dream home on it in 10 years but can use the property between now and then, and maybe give it to one of their kids or sell it.”

In Sweden, 84 per cent of homes are prefabricated designs, and Japan are also big adopters. In Germany, many prefabs are passive homes, meaning they are more efficient in their energy use, easier to heat and use materials with a low embodied energy (what it takes to manufacture the raw materials).

For Isaac, the eco-advantages of prefab houses were another motivating factor. Sustainably grown New Zealand pine is a significant feature along with products such as Terra Lana insulation, produced using recycled wool.

Isaac is positive that the ongoing demand for prefabs will see Makespace expand into urban, multi-storey homes. Although they’re more complex to build, he acknowledges that New Zealanders are starting to look at things differently.

“Life is getting busier and people need simple spaces they can just escape to and turn off.”

This newly renovated home rejoices in the stark contrast between a heritage villa and the modernity of a zinc and cedar-clad ad...

When decorating, fashion designer turned interiors guru Matthew Williamson applies the same logic as he does to dressing: have ...