On a summer afternoon, you may well find one of the owners of this Mangawhai holiday home snoozing in their hanging chair at the tip of this dart-shaped house.

“It’s a little bit like being in the cockpit of a plane or a boat,” he says of the deck located off the master bedroom at the apex of the home designed by Auckland architect John Irving.

With views to the east, over the Hen and Chicken Islands, the private deck space is a sublime spot for bird-watching, and following the billowy clouds casting their shadows over Bream Bay.

“The house is basically a north arrow,” says John, who swiftly sketched up the design during his first site visit. And surprisingly, the clients didn’t change a thing from his first presentation. “That never happens,” he adds.

The dart design allowed the 200sqm house to face north, while blocking out the only visible neighbour, and providing ideal locations for all three bedrooms, one at the front and two at the rear, all enjoying different aspects of the rugged views. 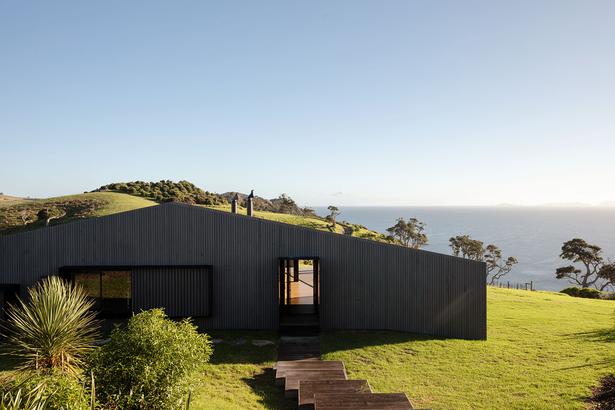 The gabled roof gives the triangle-shaped house a farmhouse facade from this angle. Photo / Simon Wilson

“The shape of the house was really just a direct response to the typography of the site,” he explains. “You’d think a triangle form might be a bit awkward, but it ended up working really well. Even though it is a strange shape, you don’t perceive it as such when you arrive. It actually looks more like a farm building with a gable on one end.”

The Auckland-based homeowners had been searching for a section that was within reasonable driving distance from Auckland, yet wasn’t overpopulated or built up. “We were after a feeling of isolation, but we also needed to be able to jump in the car after work on a Friday and still enjoy part of the evening,” he says. The solution was found after friends who had looked at the Breamtail Farm development, tipped them off.

The working farm located between Mangawhai Heads and Langs Beach had been developed into a gated coastal community and all 41 sites have expansive sea, coastal and country views. The owners of the Dart House were not only blown away with the vistas, but were also sold on the conservation values of the project.

Each resident has access to 186 hectares of preserved kauri forests and wetlands, where birds and wildlife thrive. Kaka, bellbirds, red-crowned kakariki and the Northland brown kiwi can all be found here in the bushlands.

The rambling walking and riding trails span more than 20km and loop into the coastline, which includes Mangawhai Beach and a few smaller beaches tucked in among rocky outcrops. “We spend a lot of time walking the tracks or driving the quad bike down to the pavilion and pool area near the beach,” says the homeowner. The trip is just a five-minute ride from the Dart House, or 10-minute walk down the hill. 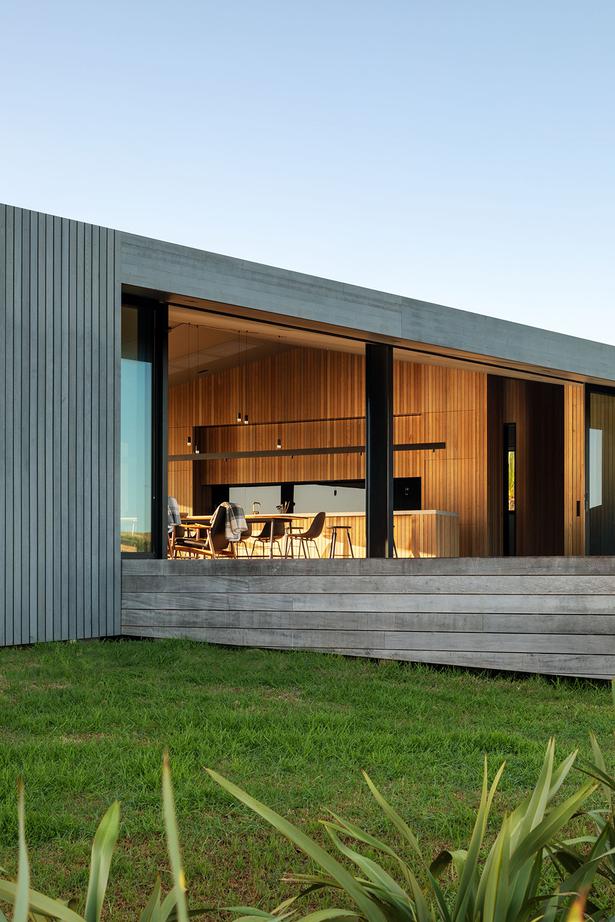 The striking cedar cladding was chosen for its rustic appeal and ability to blend with the surrounding bush. Photo / Simon Wilson

His partner says they have got to know many like-minded neighbours and families since they built. “A few families live at the farm full-time and we’ll often organise cooking competitions down at the pavilion, or one of the neighbours will pop in and pick up our son on the quad bike,” she says.

In addition to a residents’ swimming pool, games room, tennis court and cooking area, there are also plans to put in a basketball court. Each property owner leases back their part of the land to the sheep farm and, apart from providing rural appeal, the lease monies keep the residents’ fund flush to offset the costs of maintaining the conservation areas. “I think my favourite view is over the farm. The sheep and cattle come right up to our fenceline, it’s pretty cool,” she says.

The bucolic view is also on the sunset side and most nights there is a spectacular show of colour, filling the evening sky with shades of pink, peach and purple.

There are two deck areas off the middle of the living area, one on the east and one on the west. Depending on which way the breeze is blowing, the couple set up camp and often spend hours lying on the deck watching the clouds, the light and the water. “It’s a spectacular changing picture,” she says.

The couple split their duties when it came to the building process. The nuts and bolts of the exterior build were left to the man of the house, who says cedar, clad over dark-painted weatherboard, was chosen for its rustic appeal and the fact that once it greys off, it recedes into the bush.

One of the more unexpected aspects of the build was the complexities related to the unusual floor plan. “Little did I know the triangle shape would increase the cost of, well, everything, due to odd shaped boards, windows and joinery,” he says. 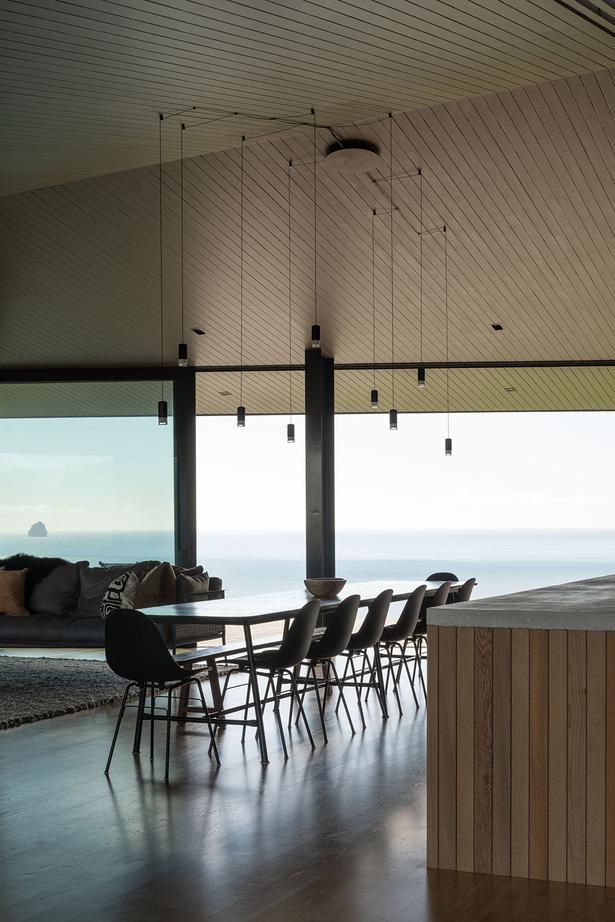 A 4m-long table from The Vitrine has prime position in the dining area. Photo / Simon Wilson

Even so, he is thrilled with the result, admitting the master bedroom, which has windows on both sides that open to dense bush in the west and the sparkling ocean to the east, is his favourite room, whereas it might not be his wife’s. “I don’t sleep that well when there is a full moon!”

She’s sold on the expansive kitchen that features a 6m raw-concrete bench — poured on site, as it was too large to transport. “The kitchen is in the widest part of the house, so you can see the farm and sea views from the helm.”

For good measure, John threw in a visual trick in the kitchen to capture the vistas. The black glass splashback acts like a subtle mirror. “It’s not as narcissistic as a standard mirror,” says the architect, who positioned it just below eye level so you wouldn’t be staring at yourself all day. Rather the ocean views are moodily reflected back at the stool dwellers and the chef.
Part of the brief was that the interiors needed to be robust, easy-to-clean and informal.

“When I’m designing a holiday home, I think about informality, and the materials have to be bulletproof and the kitchen, especially, needs to lack the banality of everyday life.” John specified cedar ceilings and cabinets with push catches, while plasterboard was avoided entirely.

“The palette is warm and dark as there is plenty of light in the house,” he says. The homeowners selected matte-black stained floorboards to work with the overall cedar and black theme. “We live in a villa in Auckland, so we didn’t want anything white. We were looking for a slightly moody, mid-century modern look,” she says. “And it’s just as lovely on a windy, cloudy day as it is on a bright day.” 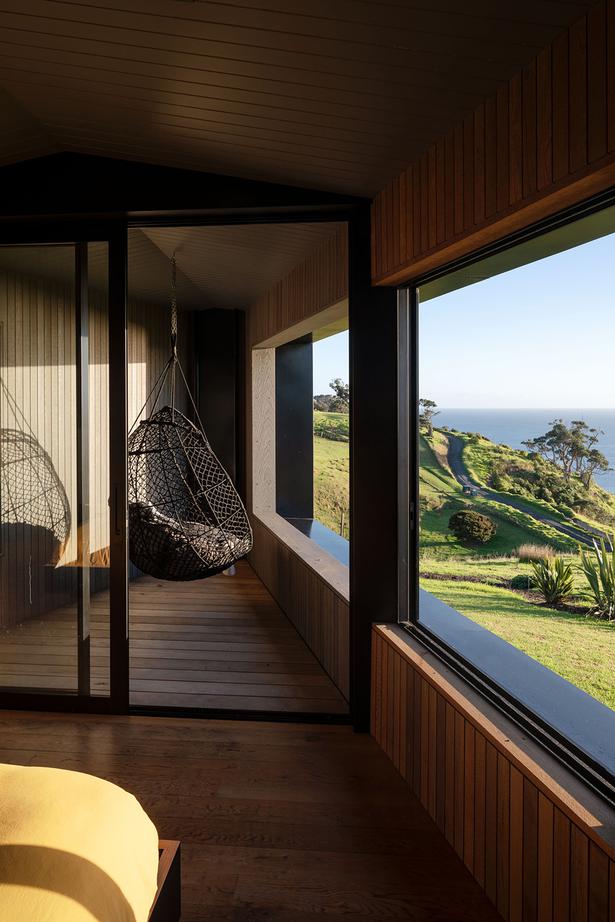 ECC lighting features throughout the home – above the kitchen island is the 'Running Magnet' by Flos. Also from ECC, in the living room, armchairs by Ritzwell add mid-century appeal. The Nodi rugs were chosen for their softness and texture. “And the rugs hide the dog hair.”

The owner had difficulty finding a dining table long enough for the space, so she ended up at French antique importers The Vitrine who had a 4m trestle top they ended up making into a table. She also sourced from them an antique bench that sits to one side of the table. The 'Ta' dining chairs were found at Auckland’s Dawson and Co as were the 'Raft' bar stools.

In the master bedroom, a black stained ply bed from Tim Webber takes centre stage, while in her son’s room a custom bunk bed set in black was designed by Studio John Irving Architects. The two sling chairs from Madder and Rouge were a gift from wife to husband after the land was purchased and the swinging chair where her husband loves to snooze was found at Dawson & Co. “We always know where he is when he’s disappeared.”

At this stage, artworks appear only in the bedroom, featuring works from the owner’s Pacifika art collection and framed pieces of school art from her son’s bedroom.

“I’m looking for a piece for the only wall in the living area that can take an artwork — my husband was actually quite pleased there weren’t too many places for art here — not that we need any distraction from the view.”