Building a house in Central Otago isn’t usually a straightforward proposition. The magnificent natural landscapes — one of the biggest drawcards for the often-wealthy purchasers in the area — are rigorously protected by covenants that require houses to blend with their surroundings in an unobtrusive way.

Auckland-based architecture practice Fearon Hay have considerable experience with cleverly adhering to the area’s covenants, and their Alpine Terrace House, one of the Gold Pin Residential winners at this year’s Best Design Awards, is no exception.

Commissioned by a couple who travel regularly between multiple homes in multiple countries, it was designed to be both a protective sanctuary and a picture frame for the incredible 360-degree views that encompass the Gibbston Valley, the Wakatipu Basin and across to Arrowtown.

A substantial home of more than 350sqm, the house sits both low in the landscape, and floats just above it, on a concrete plinth with a cantilevered edge as the ground slopes gently away from the main entrance.

The house is composed of four linked rectangular buildings that form a fortress around an open interior courtyard: a pair of guest rooms and a kitchen designed for social occasions; a dining space flanked by two sitting areas; the master suite, bathroom and library; and a reading room with mudroom, coats and garaging. 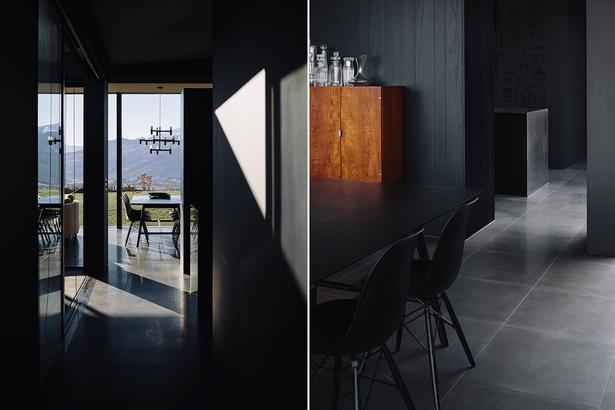 When the weather is harsh and the wind is up — as it often is in the area — the exterior of the house can be shut down with folding external shutters, with the focus of the home turning inwards towards the central courtyard. On beautiful, clear days, the shutters can be rolled back, opening the home up towards the encircling mountain vistas.

The house is clad in a combination of dark-stained cedar, blue steel and darkened stone, forming a low-profiled, receding form in the park-life landscape around it. The gently pitched planes of the roof stop the building from presenting as a relentless block, and instead add a subtle sculptural element.

Inside, the interiors have been rendered in dark colours — primarily Resene’s Bokara Grey, a charcoal black with warm red and yellow undertones — to keep the eye drawn to the views, creating a seamless transition from outside to inside and giving the generous spaces a restful, enclosing atmosphere.

The home’s interiors were designed by one of the owners, interior designer Dean Sharpe, who also runs luxury accommodation agency Archistay, which rents architecturally designed homes (including this one) to travelling design connoisseurs when the owners are abroad. 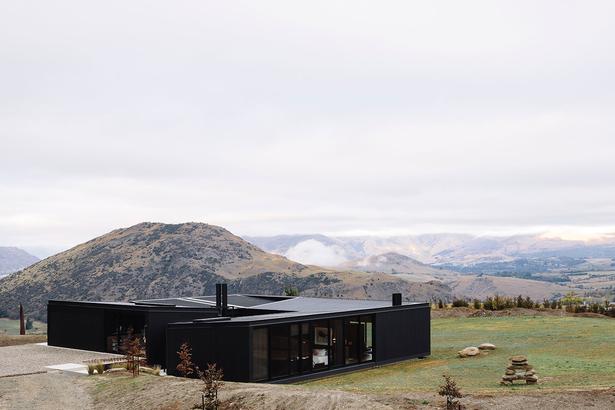 Tim Hay, who along with Jeff Fearon directs Fearon Hay, says it was a great experience working with Dean.

“He was a fantastic client in terms of a collaboration. The design of the house was originally prepared some time ago from another client, who didn’t go ahead with it. Dean picked it up and worked with us to deliver something that was very true to the original idea, but also with an injection of Dean’s interior spirit. It’s always nice to collaborate with a very like-minded client who also has a strong point of view, and we enjoy that from a design perspective.”

The dark tones of the house form something akin to a jewel box setting for the extensive collection of art and antiques the owners have acquired over the years, which adds splashes of colour and texture throughout the living spaces.

Subtle interior detailing — like a 3mm negative detail on the wall linings and the luxurious materiality in the bathrooms that were inspired by retreat spas in Asia, elevate the finish of the house, as the Best Awards judges noted in their comment: “The residence settles completely and utterly into its location with exceptional detail, and a sensitivity that responds to its changing environment through the seasons.” 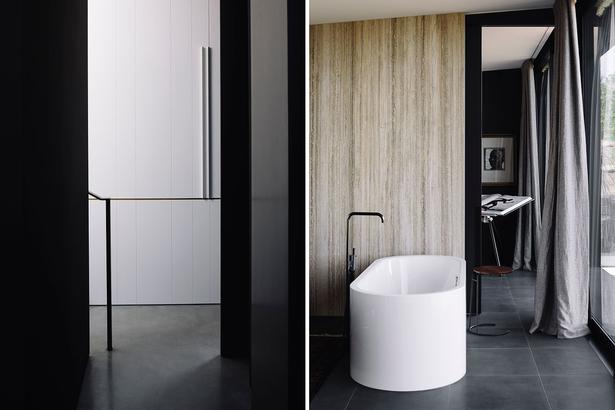 The home's interiors were designed by one of the owners, interior designer Dean Sharpe. Photos / Simon Wilson

The Alpine Terrace House wasn’t the only Gold Pin that Fearon Hay picked up at the awards ceremony on Saturday night — they also received golds for their Northland holiday home project The Camp and their SOF Hotel project in Taichung, Taiwan. Tim Hay says they were particularly pleased by the diversity of wins for the practice.

GALLERY: Era-Defining New Zealand Design Pieces of the Past 20 Years

The Alpine Terrace House was special, however, he says, because at one point it had looked like the house would not be built.

“Because it was conceptualised quite a long time ago, we potentially thought it might not have ever actually happened. So it’s great that it did and that it has been recognised in this way.”