Inside The Award-Winning Campbell Courtyard House In Freemans Bay

There are a lot of impressive homes on Hepburn St in Freemans Bay, from the grand, double-storey villas near Western Park or, down the other end, the sought-after apartments in the iconic Star Blocks. About halfway up, there’s a small and special place that’s just been recognised with an Enduring Architecture Award by the New Zealand Institute of Architects.

The Campbell Courtyard House, as it’s known, doesn’t shout its presence; it’s tucked away behind a concrete block wall, under the shade of a huge pohutukawa. Entering through a streetfront gate, the visitor passes through a garden courtyard to the stained-glass front door. 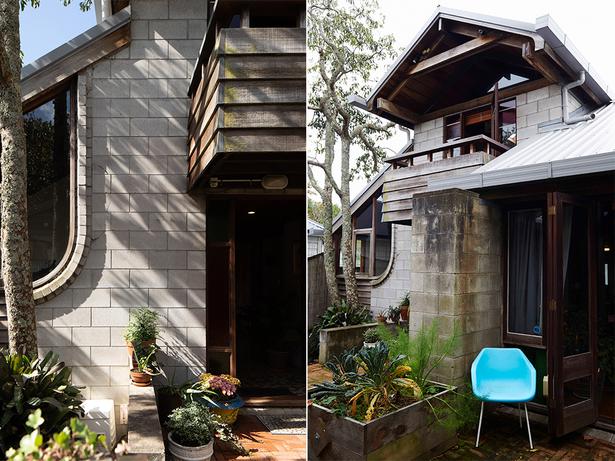 The house was designed by Nicholas Stanish and Russell Withers in 1972. Photo / Rebecca Zephyr Thomas

Inside, the space opens up dramatically into a double-height stairwell, with the living room, kitchen, breakfast room and a downstairs bedroom branching off in different directions. Upstairs is another bedroom and a study and balcony that look out over the street, in an architectural nod to the bay windows of old villas.

The first impression is of space — the upstairs mezzanine is completely open to the lower floor — and a rich materiality of concrete, woods, ceramic tile, brick, cork and glass. Despite the profusion of materials, and the compact size, it doesn’t feel crowded or busy. Instead, it has a restful, Japanese-style calm and a sense of connection to the outside world through the abundant natural light and breezes that move through the house.

The house was designed by Nicholas Stanish and Russell Withers in 1972 for a block-layer client and his wife, at a time when Auckland Council was trying to encourage urban intensification. The council’s Courtyard Ordinance allowed houses to be built right to the edges of small sites, as long as they fitted within a certain “daylight envelope” that didn’t affect light and views for neighbours.

Although the ordinance didn’t result in the widespread urban intensification that the council hoped for, the Campbell Courtyard house was one of the gems that came out of it.

Unlike most modern homes, which revolve around large, discrete spaces that can be closed off from each other — a vast kitchen/living space, bedrooms with their own ensuite bathrooms, perhaps a spacious family room — this compact house is a stepped series of small, intimate spaces that flow directly into each other.

That openness was a direct response to New Zealand’s typical house layout at the time it was built, which was a villa or bungalow with a long corridor through the centre, says one of the house’s two architects, Nick Stanish. 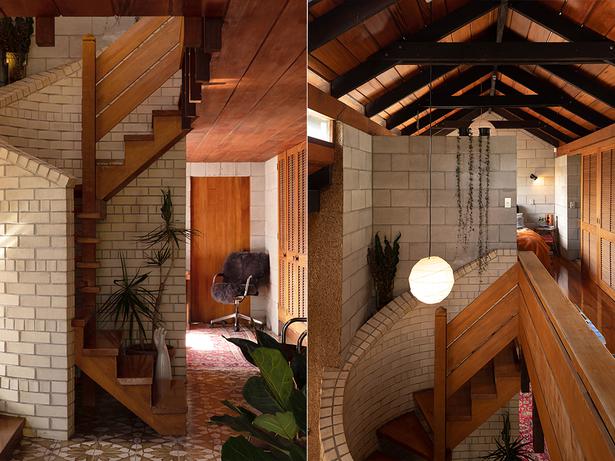 “Both Russell and I, like many architects of the time, grew up in corridor houses,” he recalls. “With this place, we had a bet — could we do a house with one door?” And they managed it — the only internal door in the house is for the bathroom. Today, it’s home to Dion Gosling, who has lived there for a year, renting it from Wong Liu Shueng, who has owned the house for more than two decades and lives in a neighbouring property.

Despite the well-intended suggestions of friends over the years, Liu Shueng decided not to modernise, leaving the original concrete walls exposed, the wooden cupboard doors unaltered, the original wooden kitchen benches and tiled entrance flooring in place, and even preserving the rich, mustard-gold living room carpet.

“The Enduring Architecture award has been a real endorsement of Liu Sheung’s decision to stay true to her belief that good design endures,” says Dion. Nick agrees: “It’s quite hard for the NZIA jury to find works that are 40 or 50 years old. I can think of so many houses of that period that are damaged or not looked after or have been changed. So it’s rather special, because Liu Shueng has really looked after it.” It has a restful, Japanese-style calm. Photo / Rebecca Zephyr Thomas

As an architect himself, Dion has a special appreciation for the unique qualities of the house. “The materiality of the place is fantastic. It’s got such a great balance,” he says. “The warmth of the wood against the coldness of the concrete; the hard concrete tiles are given softness by the colour and pattern; some of the considerations around the windows and light and the little recesses in the structure and how they’re expressed… there are details that seem to happen so simply but are actually very difficult to achieve.”

Indeed, the house as it is wouldn’t be able to be built today, says Nick, not least because the client himself was responsible for the intricate brickwork that is used to outstanding effect in the stairwell and window edgings, which kept the cost of building down to a manageable $21,000. This house is a stepped series of small, intimate spaces that flow directly into each other. Photo / Rebecca Zephyr Thomas

“Figuring out how to make it all work was quite challenging,” says Nick. “You couldn’t build anything like that now — it’s not an “Acceptable Solution”. In the 1970s, it was a much more experimental time.”

In the year that he’s been there, Dion has layered in his own sense of timeless style — classic furniture pieces sourced from vintage stores like Flotsam & Jetsam, lush houseplants, piles of coffee-table books, ceramics, and artefacts of his work, like a raw stone slab laid over a trestle table in a way that turns a simple piece of furniture into something unique. There’s a notable absence of a television.

“I haven’t had a TV in a long time,” he says. “Often I think we dominate living spaces with a 104-inch thing. Whereas after work, I’ll come in here for dinner with a glass of wine, and then I’ll sit in one of the armchairs and read a book. Depending what chair I sit in, I have a different angle of recline that I can look up and see through to a different part of the house. I think we often race in and we don’t necessarily look and sit and enjoy our spaces in the way that we could.”

With the luxury of time to contemplate, Dion has found himself musing on what the house has to teach him in his own architecture practice. As a former Olympic-level hockey player (Dion was a Black Stick and played in the team that brought home a silver medal in the 2002 Commonwealth Games), he has a particular interest in the specialist field of sports architecture. His practice, Studio106, is currently collaborating with Pacific Environments NZ for the development of the Hyundai Marine Sports Centre in Orakei. Today, it’s home to Dion Gosling, who has lived there for a year. Photo / Rebecca Zephyr Thomas

“One of the things I’ve been thinking about lately in the work we do in sports and community architecture is a theory from Ray Oldenburg, a post-war architect, that we have a home and a workplace, and there’s what’s called the ‘third place’,” he says. “In the American and the European context, the third place is usually the cafe — it’s a place that’s safe, it’s accessible, where we can go to have our conversations. I’ve been thinking lately that maybe our sports facilities or centres can become that third place here.”

Of course, sports and community centres are typically large, open, voluminous spaces that don’t tend to attract people who just want to gather and chat.

“What can make that third place work for people is when it has references around the domestic house. In this space” — Dion gestures around the living room — “you have a really tactile material approach. But you also get the idea of volume, and being able to see the junctions of the building and through the different spaces and volumes.” The NZIA jury also found the house an instructive example of good urban design. 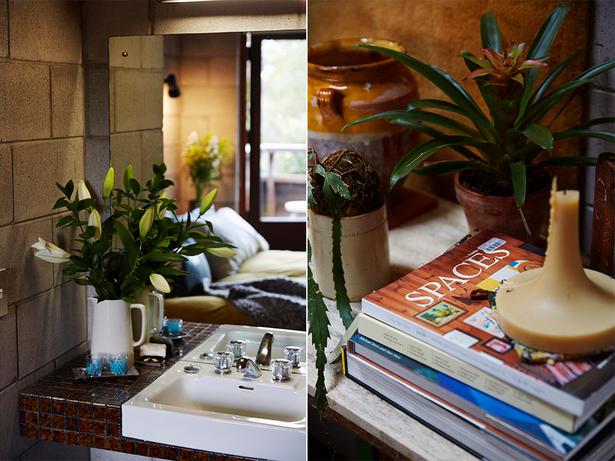 In the time he’s been there, Dion has layered in his own sense of timeless style. Photo / Rebecca Zephyr Thomas

“This intimately scaled townhouse has continued relevance as Auckland seeks contemporary urban intensification,” they wrote. “[The] design is sympathetically integrated into its heritage context, and is a celebration of layered details between brick, concrete and glass.”

Part of its success lies in the way the spaces follow the sun through the day and give a constant sense of connection to the outdoors. In the morning, the eastern sun wakes the bedrooms and warms the outdoor terraces where you might drink a coffee or eat breakfast. Through the day, the workspace and kitchen are well-lit without glare, cooled in summer by the breeze. In the afternoon, the northwest-facing living room and front courtyard catch the last rays of sunlight.

Nick, who says he looked to Japanese design and the work of the iconic New Zealand Group Architects for inspiration in his design, says he never thought the house would win an award. Part of its success lies in the way the spaces follow the sun. Photo / Rebecca Zephyr Thomas

“The only house I ever entered into the awards was the house that I did for Tom Clark [Sir Thomas Clark, founder of Ceramco and Crown Lynn Pottery], and I thought that was such a special house that maybe it was worth it. And that won a national award.”

Although the Clark’s Aotea Farm was indeed special, the Campbell Courtyard House shows that a home doesn’t need to be big to be brilliant.

How To Pick The Perfect Pots For Your Houseplants