In the right corner of the living room sits the mid-century Danish sideboard that sparked the mood for the entire interior. Photo / Simon Devitt The owners of this heritage-zoned villa, just a hop, skip and a jump from Auckland’s Ponsonby Road, had a decent amount of time to work out what they desired in a renovation — 12 years to be precise.

Owners Paul and Andy Eakin explain the original dwelling was an old workman’s cottage with a lean-to at the back, so there was already a clear delineation between the original heritage villa and the add-on. They chose to retain this contrast, accepting the charm of the old with the bling of the new.

While most neighbouring villas are situated smack bang in the middle of their sections, Paul and Andy’s villa was positioned to the right, with a long driveway down the left-hand side, which was eventually shunted up to the front of the section, allowing them more garden space and the opportunity to place a lap pool along the western boundary.

The couple considered three architectural firms before deciding on Rogan and Nash, a local firm consisting of partners Kate Rogan and Eva Nash.

“We came away with a really good feeling. They really complement one another — Eva is more of the engineering brain and Kate is more of the creative interior arm,” says Andy.

“We wanted help with the interiors and we found a pair who had a design ethos in line with ours,” adds Paul. 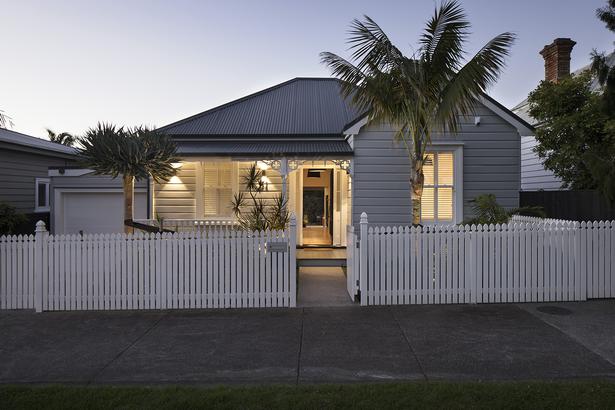 The heritage one-zoned villa's facade was restored to its former glory with new finials and balustrades. Photo / Simon Devitt

In testament to Eva and Kate, the first concept remained pretty much the same, bar a few minor tweaks. It’s a seamless result, with a mid-century palette of rich tones in the walnut cabinetry, cedar ceilings and concrete floors, complemented by greens, blues and greys in the soft furnishings.

The interior palette blends with the greenery of the outdoor spaces, designed by the Ministry of Ground, that consist of a north-facing garden, screened for privacy with a lilly pilly hedge and an outdoor table and fireplace.

Along the western side, the lap pool links to another more intimate cocktail terrace featuring an additional honed granite-clad fireplace by Warmington — with powerpoints positioned underneath for Sonos speakers and an inbuilt seating nook and sofa.

Kate and Eva agree Paul and Andy were trusting clients who gave them fairly free rein on interior choices from furniture, fabric and rug selections, to paint colours and artwork. “The project became very personal as we built their trust,” says Eva.

The pair, who often think of words before they begin a concept, named the project The Stage and the Cave. After meeting Paul and Andy, they realised the couple needed two zones in their home, one for entertaining, the other for cosy relaxation, so came up with the idea of compression and release.

A smaller cosy nook — the “cave” — is the soundproof media room with a 2.7 metre walnut-panelled acoustic ceiling that gives their TV room a cinema-like sound quality; the more dramatic “stage” consists of the lofty 3.5 metre stud which encompasses the living room, dining room and kitchen — “which has a performance quality to it”, says Kate, and a hidden scullery to the side which has a door to access the outdoor table — ideal for running food from the kitchen when entertaining al fresco. 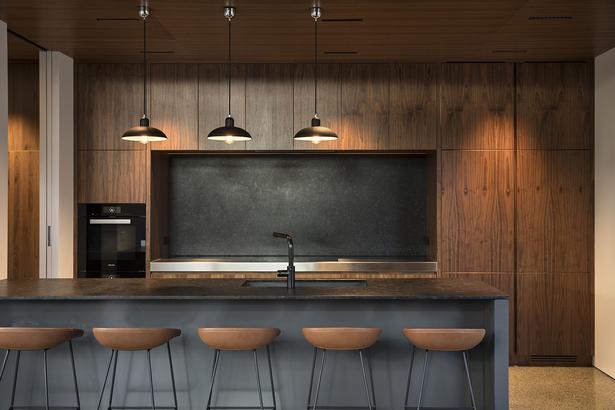 The kitchen counter and splashback are finished in honed granite. Photo / Simon Devitt

Not only did Eva and Kate consider their clients’ love of a good party when it came to the layout, their interior choices were piqued by one particular piece of furniture — the only item to make it through the furniture cull after the renovation — a Danish mid-century Clausen and Son sideboard.

“Andy found it in Nelson on Trade Me after a few too many wines,” quips Paul.

Kate explains: “We might look at an object, a pendant or a clock that the owners already possess, that often sparks an idea for a colour palette or era.”

This piece was a key reference for the walnut panelling throughout the addition, along with the warm cedar ceilings and exterior cedar panelling. The architects created a wall especially for this sideboard and it sits near the north-facing garden and doubles as a drinks table when parties are thrown.

The classic George Nelson pendant group lighting from ECC in the living space was also a nod to mid-century modern, as were the over-the-counter lights by Kaiser Idell from Fritz Hansen, available from Cult.

Other clever lighting choices include circular recessed office lights by iGuzzini — in this case used for task lighting in the kitchen, also from ECC, and recessed LED lights positioned in the living room blind pelmets that hide both the blinds and the lights.

The facade of the villa had a meticulous makeover, in line with the heritage one-zoned requirements of this part of Grey Lynn. “We completely rebuilt the facade, and after looking at original photos of the villa, added bannisters and finials to enhance the home’s best features. We felt it was what the house wanted to grow up to be,” says Kate. 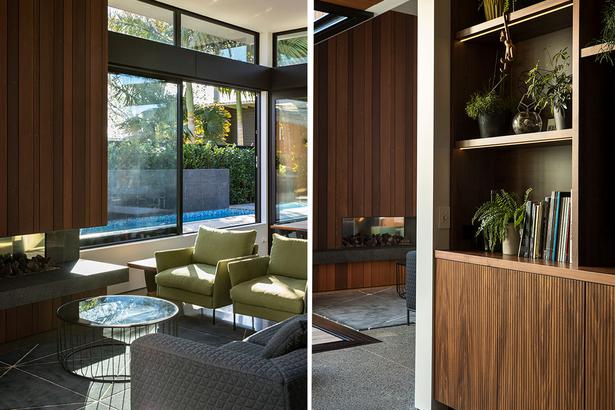 The living room features Simon James furniture and looks out over the lap pool through large sliding windows; the shelving unit is finished in the same cedar ceiling panelling that appears in the kitchen. Photo / Simon Devitt

The health of the house, and those in it, were also considerations for the architects, who installed double glazing and low-emissivity glass to prevent those “windows that cry”, according to Eva.mIn the original villa, all the walls and floors were reinsulated and insulated drapes were installed throughout the original dwelling to prevent draughts.

“We really believe architecture can change your life; a warm, dry, light-filled space will make your day better and keep everyone healthier. No one should have to sleep with a woolly hat!” adds Kate.

Apart from reducing moisture in the home, double glazing reduces nearly all the noise from the surprisingly busy road outside, which the owners discovered caters for at least 10,000 cars a day.

Other additions in the villa, which has three bedrooms, two bathrooms, an office and an attic for storage, include new wardrobes by Boston, updated bathrooms with eye-catching green marble feature walls contrasting with white subway tiles, along with a meticulous reproduction heritage ceiling in the hallway before you step down to the new addition.

The floors, which were originally an unappealing orange colour, according to Paul, were sanded back and a black sealant was buffed into the cracks before the final matte wax was applied.

The minimalist kitchen, conceived by Neo Design, features handleless touch hardware by Blum, a honed black granite counter and splashback. All appliances and mess are tucked away in the scullery, bar the two refrigerators that sit side by side — one a party fridge stocked with drinks, the other a food fridge. Genius.

Andy says the builder had warned them “this is going to be an awesome party house”. And so far it hasn’t disappointed. For Paul’s 50th, the guest list was close to 80 and not once did the couple feel like the home was too crowded — evidence of a very well-thought-out floor plan for the new 100 sqm space. “There were people in the pool, in the kitchen, around the two fireplaces and in the TV room, so it never felt too overwhelming,” says Paul. 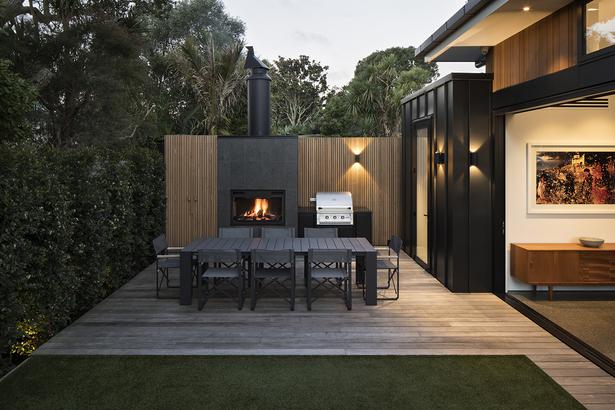 When the party’s over, or coming to an end, the pair often retreat to their soundproof TV room which was also designed by Neo. Acoustic panels in the ceiling help to absorb the sound and with the doors closed, no noise can escape and bother the neighbours.

Custom-made inbuilt seating wraps around the cosy cave and houses storage drawers underneath. The couple were very specific about comfort, so splashed out on the best quality foam and fabric that would be ultra-comfy and durable.

Ben Glass, a friend of Andy’s, designed and made the sleek wooden dining table, which is known as the Panda table — a riff on the pair’s combined nickname.

“Our friend’s call this the Panda enclosure,” says Paul with a grin. Hence the black and white Banksy stencil of a gun-wielding Panda in the kitchen.

The duo have now set their sights on creating a new eco-friendly Panda enclosure on the shores of Waiheke Island and have once again engaged Eva and Kate to create their dream getaway, this time with the aim of creating an 8-star rated home. Less of a stage this time round — more of an eco-cave.

Tired of your all-white interior? Consider adopting one (or many) of these brilliant options