The owner's brief was for powerful buildings, but which sat comfortably in the glorious landscape and looked like they had been there over time. Photo / Supplied

Modern architecture, historical importance and an outstanding landscape come together at The Landing. We talk to the architect behind the luxurious Bay of Islands haven, Pip Cheshire.

When you first arrived at the 400-hectare Bay Of Islands property, The Landing, what was your response?

The first few visits were always very intense - trying to unravel a complex landscape of bays and valleys all saturated with a long human occupation. It was very exciting, though the projects were a bit uncertain as to scope and focus at that stage.

With The Cooper Residence and The Boathouse what was your brief from Peter Cooper; what did he want to achieve from the sites/buildings/interiors?

There was not a discrete brief but there is an ongoing discourse as we understand more about the past, and the future possibilities for the land. There are common values that have informed the conversations and shaped each of the projects; the desire to honour the land by creating outstanding buildings fitting gently to their sites, generous facilities for occupants, and all superbly constructed using robust, naturally weathering materials.

What did you bring to the conversations, and how did these evolve throughout the process?

As understanding of the land and its use grew through discussion and visit, I explored, tested and developed ideas for specific projects. This was done through drawings, watercolours, computer renders, models and so on. These were annotated and sent to Peter to inform our discussions. In some cases sites were abandoned or projects set aside, in others ideas were discarded only to return some time later. The Hilltop House, for example, embodies ideas first discussed over a decade ago, yet realised only in the last few years.

What were the "gifts" the sites gave you - and the challenges?

The landform is very special with folds and ridges that offer interestingly complex outlooks - very beautiful views over the northern Bay of Islands but also those of the wetlands in the valley floors and the layered ridges of the Far North revealed in the low late afternoon sun. The peninsula is very visible from the Bay of Islands and we have worked hard to set some quite big buildings gently into the pastoral landscape.

It is, though, the human history that is one of the most potent "gifts" _ the sense that this was a very early Maori settlement and also a very early Pakeha one too. 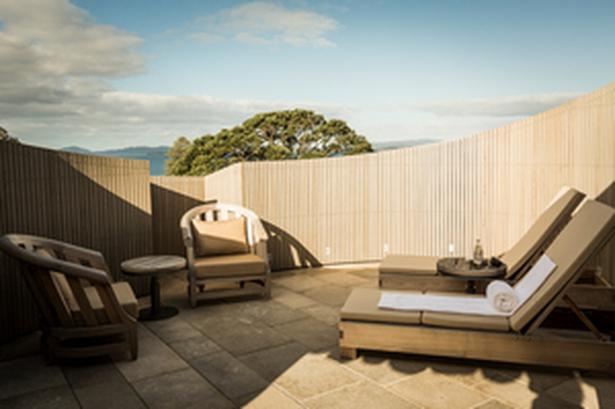 Commanding the tip of the stunning Purerua Peninsula, The Landing offers the ultimate in private, luxury accommodation. Photo / Supplied

Talk us through the materials you used?

We want powerful buildings, those that sit comfortably in that very visible landscape, yet not self-effacing, we want to stand strong on this potent place, one with a big history and one exposed to the extremes of our latitudes. Thus we have used materials and building forms that are robust in size and solidity, those that require minimal finishing and those that wear their age with elegance - these are timber, stone and concrete. Many of the spaces and walls run inside and out and so the material palettes are continuous in and out. Where those on the exterior are finished to resist the elements, those inside are carefully honed to be soft to the touch, to glow with reflected light and induce a sense of repose.

There is a unique farm with great historical value to the property; how did this influence your approach to design?

There are some places on the land we have chosen not to build on, special places where the sense of an earlier occupation is palpable. There are also markers of the land's history - significant trees and landforms that we have used to help orientate buildings. The buildings we have done hold some of that history too, written records, and artefacts recovered from the site and which we use to evoke the early Maori and Pakeha occupation. This is a history of engagement in the land, not of touching it lightly, and we have made buildings that are firmly rooted in the land by their mass and robust enclosure.

As a guest staying in the property, every want and need, has been pre-thought, and met. As an architect how do you "get in the mindspace" of the future occupants?

Peter Cooper has assembled, inspired and challenged a team of experienced and thoughtful designers, builders, operators and managers who have worked together on a number of projects all aimed at creating extraordinary experiences. The projects at the Landing result from the combination of this experience and thoughtful review.

How did you go about achieving different personalities for the three properties?

Each project starts with the identification of critical values that will inform the design. These evolve from discussions with owners, the characteristics of site and climate and of a wider consideration of the project in terms of architecture's discourse. This might include, for example, how one might build on historically important and visually sensitive land, what might a lodge on this outstanding landscape be like - a farm building, a station homestead etc?

The Boathouse was first and made use of an existing farm building on the water's edge. that set a template for simple barn-like forms that we employed on the later projects. That building also established a way of making living spaces that had a strong sense of enclosure as a result of their high lofted roof spaces while at the same time having large openings horizontally to allow life to be lived on a continuum from in to out depending on weather, occasion etc.

The Gabriel House sits on a very benign site and is something of an observer, looking down Wairoa Bay to the Boathouse and over the string of ponds in the valley below and the inland farm paddocks beyond. It shares the Boathouse's combination of enclosure and easy horizontal movement while the planning is organised around the requirements of an extended family, providing both privacy for family groups and big spaces for gathering together.

The Hilltop House is considered as a series of constructions that might have happened over time - an old stone tower butts against a later barn-like form which in turn supports two more contemporary pavilions. The programme of strong enclosure coupled with connection to the outdoors that underlies the other two buildings is repeated, though the forms more closely reflect these spatial differences. Thus the tower and barn are enclosed forms that suggest shelter and solidity while the pavilions are much more horizontally focused spaces. The location on the hill top presents certain challenges such as the need for a number of sheltered outdoor spaces orientated in different directions and of diminishing the building's visual impact through material selection, sculptural massing of the forms and by using two large existing pohutukawas to break up the skyline. 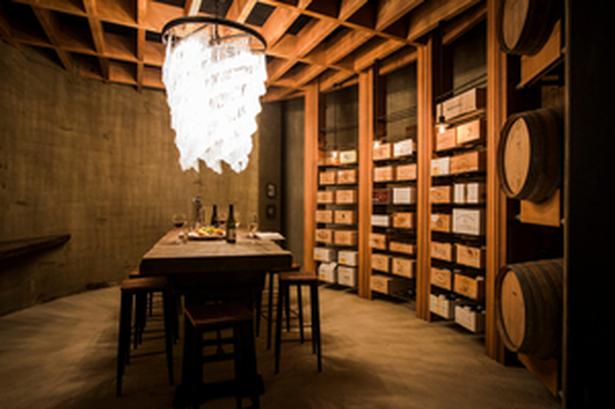 What features from each properties are you most proud of?

I enjoy the Boathouse's high, warm, wooden enveloping enclosure, with Wairoa Bay only a couple of metres away through big openings. The Gabriel House has a wonderful terrace that turns its back on the spectacular ocean views and delights in the rolling farmland- seems such a luxury to ignore the postcard view over your shoulder.

The Hilltop's tower is a splendid folly from top level observatory to basement wine cellar - a looping geometry played for maximum dramatic impact.

Tell us about the overall building process?

It is pretty intense building this stuff - high stakes aesthetically, professionally, financially, personally and the humour tends to be small Kiwi irony that gets you though the tense bits that happen when people with great skills are doing their best work together.

Tell us about the centre you've designed for the Marsden Cross Historic reserve, which sits in the bay next to The Landing?

The project commemorates the bicentenary of Samuel Marsden arriving under the aegis of local chief Ruatara to deliver a sermon at Oihi on Christmas Day 1814. This is considered the first formal engagement of Maori and Pakeha and is commemorated by a cross on Oihi Beach erected in 1914.

Our project is an interpretive centre alongside the road at the head of the valley and just over the fence from The Landing. The centre overlooks the valley in which a mission station was established after the sermon. From the site you are able to see Ruatara's pa and the cross on the beach below. The centre is comprised of a pair of high enclosing rammed earth walls forming a "u" shape looking down the valley and surmounted by a very thin folded and triangulated roof made of plastic composite material.

The form of this very sculptural building particularises a spot of open Northland hillside and does this by focusing the view toward the pa and beach, and by altering the acoustics. The massive walls cut out road noise and amplify the birdsong from the valley in front.

The construction is complete, requiring only landscaping to complete before its formal opening later in the year.