The apartment is located in what was once a mechanic’s garage. Photo / Charlie McKay In a city as large and historical as London, living spaces can vary as much as their inhabitants. New Zealanders Jess Murphy and Charlie McKay can attest to this, having lived in a Victorian apartment, a wide-beam canal boat and a converted church in the seven years they’ve been in the city.

Jess, an interior stylist and set designer, and Charlie, a photographer, are now settled in a light, bright and plant filled warehouse-style apartment in East London.

The creative couple moved to the city from the south of France in 2013, where they worked and lived for a short time. Jess’s clients include magazines L’Officiel and Vogue Italia and stores Cos and Net-a-Porter, and Charlie specialises in food and drinks photography for various London eateries, as well as interiors and lifestyle imagery. 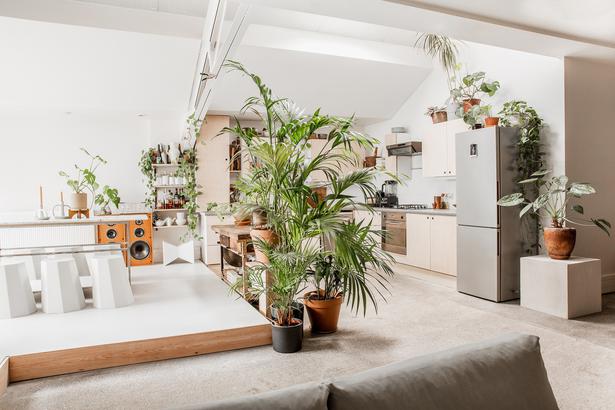 As many New Zealanders who’ve made the same move might have experienced, Jess and Charlie found securing housing in London and getting off the ground workwise a challenge. “But after living here for seven-plus years, we have it pretty worked out and manage to have a nice time with plenty of travel, good food and drink and lots of motorbike riding,” says Charlie.

Jess and Charlie bought their apartment about two years ago, after a competitive buying process involving eight months of negotiations. Situated just outside Hackney, it’s the first London-based dwelling they have owned (aside from the canal boat they bought and renovated) and they’re enjoying living a little further out east as they were able to find something more spacious yet affordable.

“It’s a quick bike ride to lots of good stuff,” says Charlie, “but in our immediate vicinity it’s still fairly undeveloped, although we’re seeing more and more designer pushchairs by the day.” 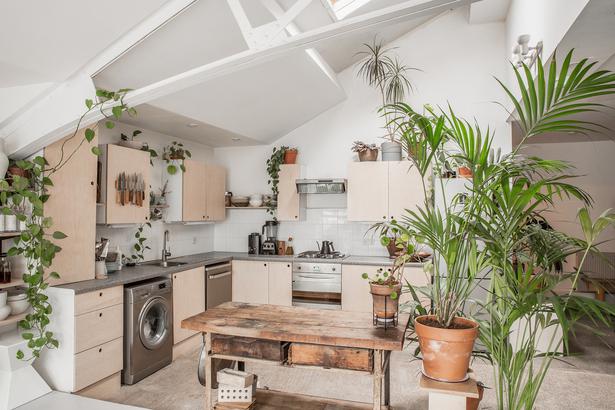 An open-plan loft apartment, the couple’s home is in a section of what was once a mechanic’s garage. The kitchen, dining room and bedroom all seamlessly flow into one another, and there’s a separate studio space where Jess can sew and create props for her set design work, and Charlie can edit photos at his desk.

They both work from home when they’re not out on location jobs, meaning the entire space needs to be modular and adaptable. “We sometimes use the dining room space as a still-life studio too, hence the table being on wheels,” says Jess.

READ: Are You A Conformist? Examining The Sad Disappearance Of True Original Style

“It needs to feel like a good workplace and also a nice home,” adds Charlie. “It has to feel relatively orderly so that we can both work with an uncluttered mind, but also we need all the comforts for when we’re not working. It’s not a very hard brief to fill but both work life and home life produce a bit of clutter so we’re always working to keep it functional.” 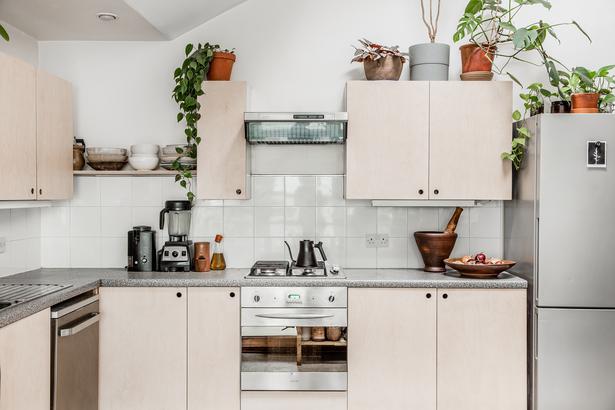 The kitchen, dining room and bedroom all seamlessly flow into one another. Photo / Charlie McKay

Jess and Charlie have clearly tapped into their knack for aesthetics, creating a pleasingly monochrome space peppered with wood and green, and with a focus on contrasting textures.

“It’s got some interesting industrial features, like the concrete floor and metal ceiling beams,” says Jess of the building, “but also has some not-so-nice bits like the aluminium windows — the downside to being converted to apartments in the 90s.”

In terms of their decorating style, the pair are usually on the same page, she says. “We try and work with the existing features of the house when we can, so this unifies our aesthetic.” 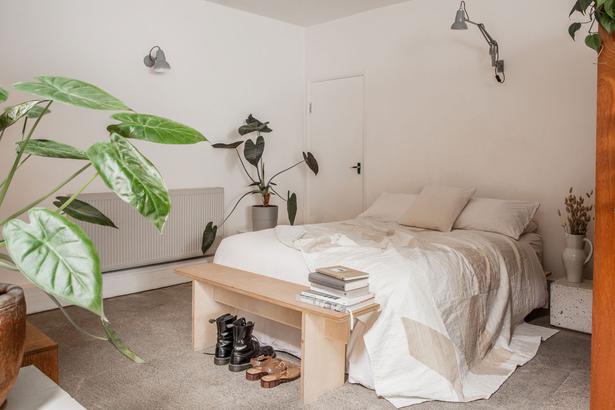 Recent tweaks to the space include grinding the paint off the floor to reveal polished concrete underneath and, to harmonise with the industrial look, they replaced several of the wall sconces with wall-mounted Anglepoise lamps, a type of hinged-arm fixture designed by British designer George Carwardine in the early 1930s. They always have an abundance of plants, but even these evolve as the surroundings change, says Charlie.

The couple travel regularly, for work and play, which brings a flow of inspiration from various global sources. “We quite often look to modernist and brutalist styles for ideas, as well as Japanese interiors for simple functionality,” says Charlie. “When possible, if we’re in a city that has great architecture, we try to go and look at great houses or gardens, which quite often gives us a kick up the arse in terms of finishing and fixing things in our own place.” 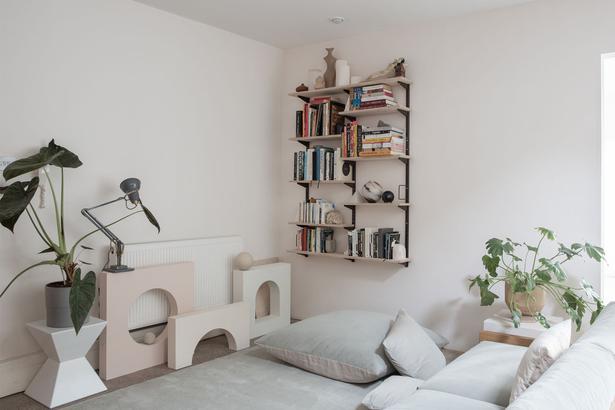 “We quite often look to modernist and brutalist styles for ideas, as well as Japanese interiors for simple functionality,” says Charlie. Photo / Charlie McKay

Looking at their home, it’s clear the couple have a love of uncomplicated, well-made items. Jess’s favourites include a smoke-fired ceramic vase that belonged to her late grandmother, and the quilt on the couple’s bed which Charlie commissioned from Lauren MacDonald, a friend and maker whose brand is called Working Cloth.

This love of beautifully-made things extended for a time to an online store called Salutations Studio run by the couple until December 2018. During that time, the duo designed a chef’s knife and had an expert London-based knife maker create 10 of them to sell, keeping one for themselves. It’s one of Charlie’s favourite belongings, made with a black oak handle and carbon steel Hitachi blade. 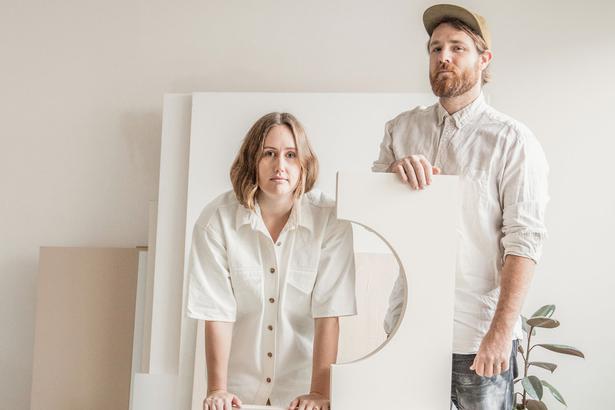 Living in an open space has challenges and advantages; as everything’s on show, the couple have made sure to cull superfluous items. The positives include high ceilings and natural light, and a sense of spaciousness from the open-plan layout, which the couple says is great for entertaining.

Future plans for the space include sprucing up the “pretty unremarkable” bathroom, and outside of home improvement, 2020 is looking like it will be a big year for both of them. 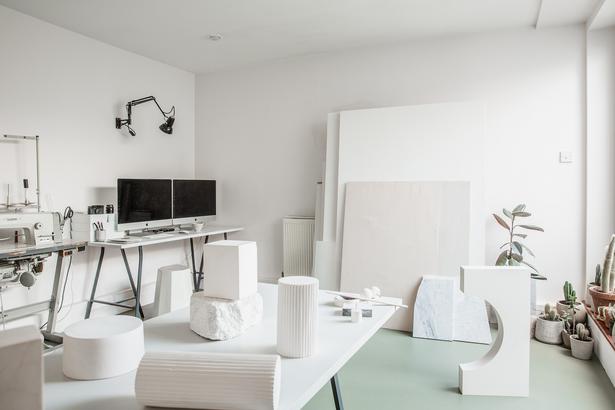 The home includes a separate studio space for the couple to use when working from home. Photo / Charlie McKay

Charlie, along with two friends, will be opening a taco spot in London called Rico’s and is part of a company called El Destilado that imports artisanal mescal from Oaxaca. Jess is planning on developing a collection of furniture and homeware pieces, and both are looking forward to more travel and motorbike riding.

Living in London does have an element of love/hate, says Jess, and can take a while to figure out — but overall the couple enjoy their adopted home.

“East London has quite a neighbourhood thing going on, but it is also big enough to feel anonymous — when you want to,” she says. “We’ve been here long enough to feel at home, and have a good work/life balance.”