The surroundings of the Canal family's house.

When Edoardo and Teresa Canal approached Box Living to design them a holiday home on Kawau Island, they didn't give the team a traditional brief. "They wanted to recreate the idea of camping on the site," explains architect Tim Dorrington.

To the Canals, life was to be lived in the Great Outdoors; the dwelling was simply an add-on that came into its own during inclement weather. The idea is akin to at-home glamping so, instead of bedrooms, the couple requested a number of sleeping spaces - quite a number.

"The family is very sociable and, during summer, it would not be unheard of for 10-15 people to be here at any one time," says Tim.

Edoardo and his twin brother, Lorenzo, bought this headland directly opposite the yacht club on the northern side of Bon Accord Harbour a decade ago. They were attracted to the island because of its timelessness - the feeling you get when you arrive here that you are stepping back in history. The 10 hectares are blanketed in regenerating bush: slender manuka and kanuka taper towards the sky while, along the coast, magnificent pohutukawa cling to the cliffside.

The couple have divided off nine other sections, and plan to create a like-minded community here.

"We're preserving the land to be used for architectural forms, rather than slapping up a generic-model home," says Edoardo.

The property's elevation ensures unobstructed views of the harbour, but the headland also incorporates a pre-European Maori pa. "Unusually, they didn't want the house to face the view, but to open on to the pa site," explains Tim. 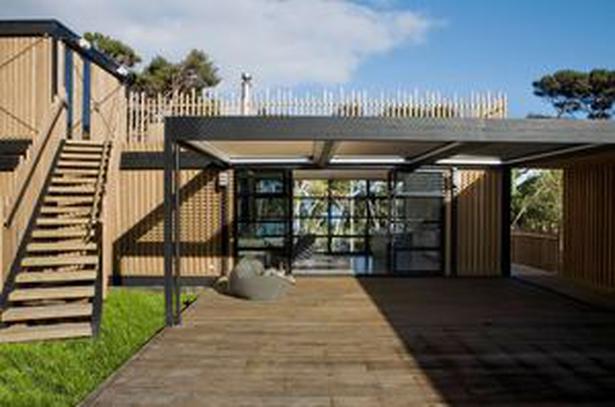 The exterior of the Canal family house at Kawau.

The brothers are project managers and engineers and called on their experience to construct a floating pontoon, a new wharf and a cable car to ferry people and provisions to the top of the cliff.

That was fortunate because building here is not for the fainthearted.

"When you know that you have to hire helicopters and barges to bring in materials, you have to plan carefully," says Tim.

The modular post-and-beam system Box Living has developed was made to perform under such pressures. Much of the home could be prefabricated so fewer workmen were needed to put it together. The accuracy of a tried-and-tested concept also ensured any last-minute dash to the hardware store was avoided.

Practicalities aside, the Canals were drawn to the aesthetic. This is mid-century Modernism, wearing an indigenous cloak.

Visitors to this retreat slivered into the bush must make the crossing by boat - a good opportunity to ease out of the everyday and switch into slow speed. They complete the journey uphill in funicular fashion: from the water a rail trail is all that is visible of habitation.

The home's L-shaped footprint creates a cloistered paradise within its embrace, sheltering the centre from the wind.

Like Lego for adults, it's made up of three boxes. One became the living and kitchen zone; perched on top of this and offset to the side is the bedroom wing for the Canals and their daughters, Florence and Penelope.

A third box, which is reached via a covered walkway, acts as guest quarters. 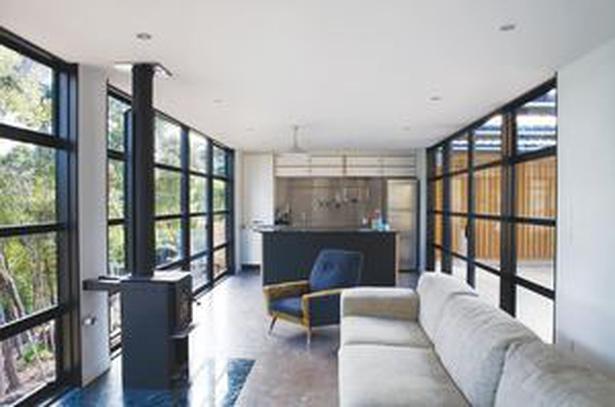 The interior of the Canal family house at Kawau.

The house teams industrial structure with elements of the marae. Exposed glulam beams sandwich plywood panels and the whole appears strapped together by stainless-steel cross braces.

Walkways with railings that mimic palisades provide a contextual reference to the former use of this land. An entry ramp cements the fortress-like image.

The language of the pa continues in battens on the band-sawn plywood cladding that needed to be perfectly aligned with these railings.

"They are a decorative feature that add texture," explains Tim.

Stairs lead to the roof deck. This provides an alternative alfresco area for relaxing and a lookout tower from which to spot the arrival of friend or foe - another allusion to the marae.

"There is about three times as much outdoor living space as there is indoors."

Although the home seems to turn its back on the view, glimpses of the emerald cove can be seen through the glazed box of the living zone. This room, which contains a plywood kitchen and wood-burner, is only 3.6m wide.

A partial wall at the southern end creates a slightly separate snug where the television and stereo reign. A pull-out couch converts it into a sleeping space. 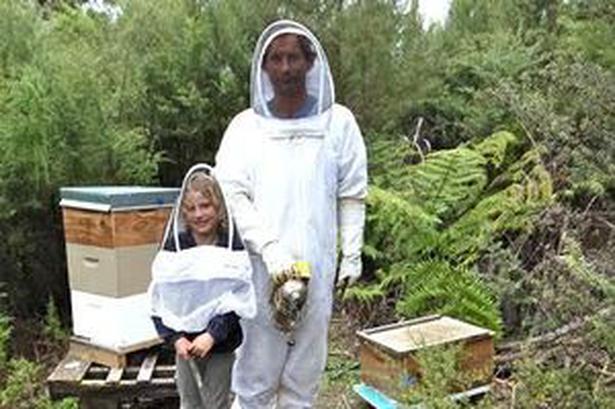 The couple's two girls spend little time inhabiting the cyber-sphere. There's far too much distraction. If they're not slowly learning the ropes of sailing with Dad, or walking through the bush, they're directing Mum in her art studio.

Teresa, an artist, has optioned one of the rooms as a painterly work space, but Edoardo gets his buzz in an entirely different manner.

Building this holiday home has proved a life-changing event.

A casual conversation with a local led him on the route to beekeeping.

"Kawau is the perfect place for bees because it's more than 3km from the mainland," he explains.

That's the distance these nectar collectors can fly so there's little chance his bees will be affected by the dreadful Varroa mite. And because there is no industry or farming on the island, the kanuka honey can readily be certified as organic.

Edoardo is hooked. Plans are well under way to upgrade his hobby to a commercial enterprise, under the trade name of Ed Bee, so he'll be spending up to three days a week here. While he tends his hives, the resident wallabies mow the lawn.

It's the sweet life indeed, but should he wish for respite from all that enterprise, he can always hang up the "gone fishing" sign.

Homeware Must-Haves To Create A Cosy Bedroom This Autumn