The melancholy melody of a street-corner saxophone drifts into the windows of Jane Mantell’s downtown apartment. Across the way on an overhang, oblivious to the bustle of the square below, a window cleaner goes about his day. These are the vignettes that form part of the scenery in the home Mantell shares with her daughters, Paige (16) and Anita (11).

Mantell left suburbia for the metropolitan buzz, partly because she was looking for a lifestyle change, and partly because the cost of buying into the quarter-acre corridor of the city fringe proved too steep. When she spotted this first-floor space in the Endeans building at Number 2 Queen St, it was advertised as "set date of sale". She breathed a sigh of relief that she wouldn’t have to take part in another madly competitive auction.

To be fair, at that stage, it could not be called an apartment. "It was just a shell that was used for storage by the art gallery upstairs," she says. Seeing the future was easy for someone who has personal experience of what can be done when the bare bones are starkly sculptural. Her mother, Annie, had transformed a former telephone exchange into what is today Mantells Mt Eden, an industrial-style venue with a French flavour that is much sought after for weddings and corporate events. The steel-framed windows and 4m stud here captured the younger Mantell’s imagination. "I’m fortunate in that some of Mum’s skill with design seems to have rubbed off on me," she says.

She promptly enlisted two partners in transforming this former storage area into a home. The first, by association, was interior designer Paola Navone. A magazine article about a Parisian apartment Navone had refurbished was her go-to visual blueprint. The second was the on-the-ground, real-time expertise of architect Tim Dorrington from Dorrington Atcheson Architects. Converting this space in an Edwardian block was not without its challenges. The property (originally built in 1902 and, post a fire, again in 1915) was the first Auckland example of a multi-storey building that used a steel-reinforced concrete system of construction. Dorrington had to comply with the requirements of the Auckland City Council and liaise with the Historic Places Trust throughout the renovation.

Expanding the outer envelope was, of course, not an option, so accommodating Mantell’s brief for three bedrooms, two bathrooms, a separate TV corner, plus kitchen, living and dining, took some clever formulating. The resulting plan, within the empty case, is so deft that all this living is squeezed into just 109sq m.

When you cannot build out, the obvious answer is to build up; luckily the high stud provided a vertical expanse to accommodate this. Dorrington conceptualised a contemporary insertion, clad in black steel, which was slotted into the volume to act as bedrooms for the children. This double-height cube at only 4m wide was divided into two — a room for each girl — then furnished with built-in beds and desks. One room was built as a mezzanine so that the en suite for the master bedroom could slot beneath it. The kitchen runs along the back wall of the apartment and the family bathroom is slotted in behind to take advantage of the location of the plumbing riser.

The hot-rolled steel doors of the girls’ bedroom insertion can be opened and closed like vertical blades to provide ventilation. The steel is repeated in the kitchen cabinetry and each piece was hand-selected then cut to size with a torch by the exacting team at Design Production. The heat leaves a grain-like pattern on the panels, which were carefully lined up when installed.

At more than 3m long, the concrete kitchen bench plays a significant role within the open-plan room. Again, Mantell turned to the Paola Navone for her inspiration. Born in Turin, Italy, Navone is also an architect who specialises in converting factory or warehouse spaces and has a style that embodies industrial elegance. To achieve her lightness of touch, she favours natural materials and plenty of white.

An almost-white concrete bench featured in the Paris apartment but, says Mantell, "I wasn’t brave enough to do it. I was worried stains might show and, besides, the makers couldn’t guarantee the colour." Instead, a pale-grey slab has a tactile quality that in texture and tone is a counterpoint to the powder-coated black steel. 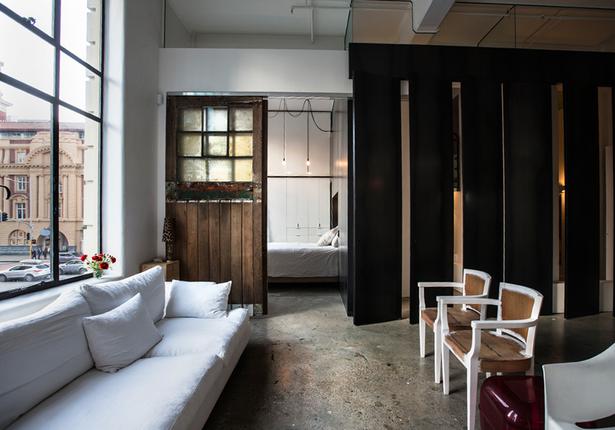 Transparency and solidity, and well-defined geometry create an interior that feels sharp and styled. Mantell enjoys the creativity of innovation where not everything is bought new. Anita’s bed frame, for instance, is made of scaffolding pipes while her own bedroom can be sectioned off from the main area by a pair of distressed wooden doors she acquired from Mantells Mt Eden, and mounted on sliding runners. Similarly her dining table top was once used as the bar. The wooden surface is now affixed to curvaceous Stephane Rondel legs, a Christmas present from her mum. Above the table, a trio of glass pendant lights from Flotsam and Jetsam — "they’re made from old wine funnels" — bring in the French feel. Pops of colour are provided by a round, red Kartell side table and translucent storage cubes in red Perspex. The fun factor is amplified by the freestanding bath in the family bathroom which is made of a polymer and incorporates lighting that can be turned on and slowly moves through a rainbow of shades.

The acid-etched mirrors by Eric Knoben form a Deco-style splashback in the kitchen and reflect the view that rushes through the tall windows. These, in turn, frame a world that has moved on since the Edwardian era. Glass-sided buildings soar into the sky.

Living here certainly has its down sides — no on-site parking for one — but the upsides far outweigh this. "I don’t miss having a garden as I’m not good at keeping plants alive," confesses Mantell. There’s probably no time for pottering anyhow, as she keeps "ridiculous" hours during the summer months, working 60 hours a week as co-owner and maitre d’ at Mantells on the Water. "I can walk to work along the waterfront, play touch rugby at Victoria Park or go to the free bootcamp in the Wynyard Quarter." Such immediate, car-free access to activities is not restricted to adults: "Paige loves the fashion in the area — which has given her expensive taste!"

At night, Mantell loves to turn on that free-spirited bath, not for a luxurious soak but to enjoy the lights as they come through the clerestory windows to wash the living zone in shades of pink, blue and green.

On weekends, of a lazy afternoon, she will sit with Anita — each on one side of the long, white sofa — in the front window with the sun streaming in. While reading, it’s easy to be distracted by the passing parade: everyday shoppers, travellers rushing to catch the bus or ferry, or activists gathering in the square for a protest march. "The girls get a different form of education just by going out into the street. Living here is as happening or as relaxing as you want it to be."

It's not just about the clothes, with luxury boutiques providing interior inspiration too - from Gucci’s extravagant Milan flag...