“Most of the time it’s the ugly things that do it for me,” admits Matthew Young, on the subject of design. “I often find beauty in bad taste and imperfection over something that has had all the edges smoothed out.”

In the same sense, the musician — who calls his sound “pop based in R&B” — finds it easier to be creative in spaces that aren’t crisp or clean.

“I love dingy little studios like the one I work in, where nothing feels pristine or polished. I do a lot of songwriting in a rundown hole in the city centre, which is where most of my music has been made,” he says. “Luxe studio spaces are often a little too clinical to me.”

Although Matthew makes an exception for hotel rooms, as a place for getting ideas out. “They’re comfortable and foreign and calming. I love working somewhere I can just sit on the bed and forget about the rest of the world.”

Matthew was born in Auckland and grew up around the Half Moon Bay area, but spent lengthy periods of time in Chicago, Illinois and rural Tennessee travelling with his family. He’s always been drawn to music — it was a huge part of his childhood, he says — and he grew up singing, learning various instruments and by the age of 13, he was writing his own songs.

“It quickly became all I really cared about, along with art and fashion. I guess I do music because nothing else really satisfies like music does and I can pair that with my love for art and clothing.”

With his dad, he would listen to Michael Jackson, who has been a huge influence on his work, along with Prince, Burt Bacarach and D’Angelo, to name a few.

“I’m a huge fan of 80s pop music, which has pretty much dominated every Spotify playlist I’ve ever created, so all these things play a part in shaping my sound.”

It’s the 80s that shaped his look too — as seen in his videos for Panama City and Magic off his EP Dive, which was released in June this year with Sony. “These aesthetics inspire a lot of the music I make, which in turn comes back to inspire my aesthetic choices,” he says.

“This may seem crazy, but colour and shape are huge inspirations as far as timbre, texture and movement in my music are concerned. Listening to music is a bit of a sensory overload for me where it’s as much visual as aural.” 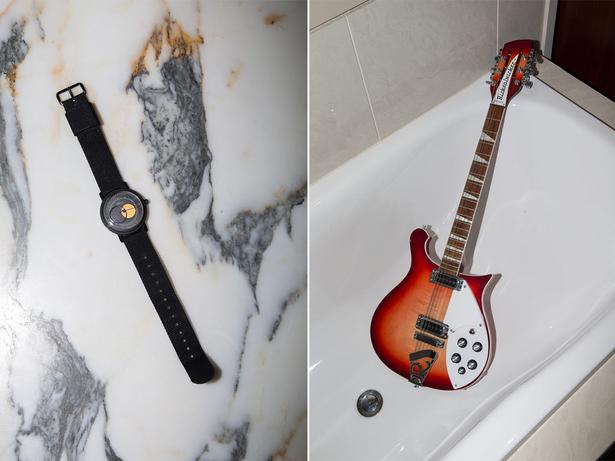 1. Raketa watch
This Russian-made, fully mechanical watch has pretty much never left my wrist since the day I bought it. It was made more than 20 years ago, but I got it new in the box from the Ukraine, which was an amazing find for this rare model — the ‘Kopernik’, named after Nicolaus Copernicus, the famous astronomer. The gold circular hand (hours) represents the sun, and the hollow, silver hand (minutes) represents the moon.

2. Rickenbacker 620/12
Maybe guitars are a little off-brand for most people making R&B, but the guitar was the second instrument I started playing, and became the instrument I wrote a lot my early songs on. Plus, Prince was a shredder, so guitars are still cool. Even though I don’t show the guitar as much love these days, my Rickenbacker will always have a special place in my heart. Mostly because it looks mental, and it’s almost like a child-sized novelty guitar, but also because it sounds amazing.

3. Nintendo Gamecube
This thing is downright hideous, but I had to include it, if only for pure nostalgia. This bright purple, lunchbox-handled vomit cube is one of the most underrated gaming consoles of all time, and the last great Nintendo console. This was the first console I owned personally, and I still love it and use it today. I think from a design point of view, it’s objectively terrible, but that’s why I love it. It was one of the last things in gaming that wasn’t made to look “sleek” and simple — it was made for kids.

4. Tintin figurine
I got this many years back at a bookstore in Sydney and it has become an heirloom in the making. I’m not actually crazy about Tintin; I have a few of the books and don’t vibe too much on the movie, but this little guy reminds me of myself during a time of real personal growth. I see it as more of a mini Matthew Young. The colour choices are so nicely muted and unlike a lot of the other more iconic Tintin scenes, this one is so perfectly plain.

5. 10 Corso Como x Superga shoes
My obsession with footwear has become a sickness that I fully embrace. This particular pair isn’t necessarily my favorite pair of shoes (I don’t really have any one favourite pair) but they are from one of my favorite designers. 10 Corso Como collaborated with Superga to make these. Their design aesthetic in general is kind of like clip-art style cave drawings, which is a terrible description, but sums it up pretty well, to be honest.