Urban bee-keeping is booming. Melinda Williams meets a couple who are putting beehives on to buildings and in backyards around the city

If there’s one insect that can inspire obsessive levels of devotion in people, it’s bees. And Luke Whitfield and Jessie Baker have well and truly caught the bug.

The Bethells Beach-based couple have only been bee-keeping for a few years but, after being introduced to it by a former flatmate, they quickly became so passionate that they set up their own hive-rental business — Bees Up Top — to help other urban dwellers get into apiculture too.

READ: Why New Zealand Manuka Honey Is In High Demand

Since launching Bees Up Top last year, they’ve set up 22 urban hives throughout the city (stylishly painted in lemon-yellow and white, courtesy of Jessie, who’s a graphic designer by trade), which are now home to more than a million bees. They have a concentration of hives on city rooftops, but also work within areas as far ranging as Manukau to Waimauku.

“The hives that we put into the backyards of people’s houses are a great way to pollinate your garden and a hands-on way for children to learn about bees,” says Jessie. 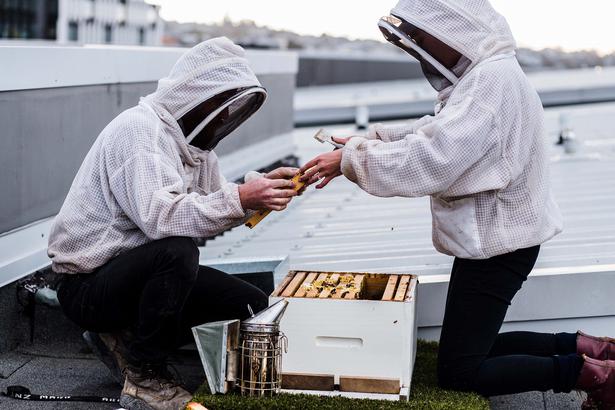 Luke and Jessie have set up hives across Auckland that are now home to more than a million bees. Photo / Supplied

“We always bring spare bee-suits to our monthly inspections so the whole family can come into the hive with us. Most people are brave and don’t wear a suit. If you know what you’re doing, you don’t need to be afraid of bees stinging you.”

Their hive programme is a kind of bee-keeping for beginners, with people who rent them getting all of the benefits and (probably) none of the bee stings. Jessie and Luke visit monthly to check on the health and happiness of the hive, remove full honey frames to give the honey to hive renters, and share their knowledge with clients.

“I love the community that goes on inside a beehive,” says Jessie. “If the queen is unhappy, then the rest of the hive is unhappy and you can hear it from the low-murmur buzz when you open up the lid. If they are happy, the noise is higher pitched.”

With bee populations in drastic decline around the world, urban beekeeping is one way people can help protect these essential insects, who are responsible for pollinating more than a third of the food crops we eat.

Although you might not expect a dense urban area to be ideal for bee-keeping, Jessie says it can be better than a rural area because of the varied floral life. “Urban areas are great places for bees because of all the food for bees planted by residents and councils. The blossom trees on the quiet streets around Auckland are a haven.” 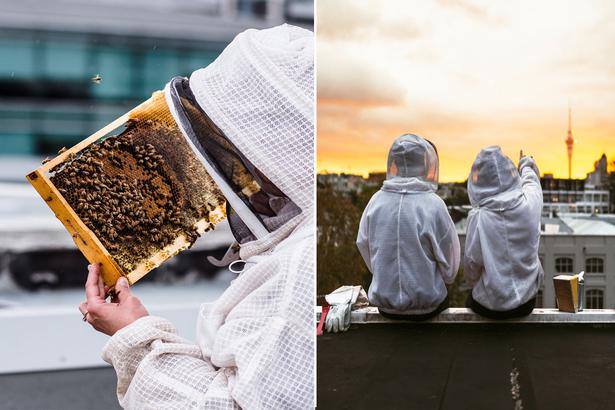 The diversity of flora in the city also makes for unique honey, with bees foraging in a five-kilometre radius around their hive. Each jar differs in taste depending on the area that the hive is placed in. “Our bees that are close to the Parnell Rose Gardens make a really fragrant, delicate honey that tastes like rosehip and is very glossy,” says Jessie. “We have a hive close to Franklin Rd [in Ponsonby] that makes a nutty, buttery honey that goes really well with cheese and figs.”

Most of the bees in their hives are “rescue bees”, started from wild swarms that the couple have captured and re-homed. Bees typically swarm in spring, when the original queen leaves the hive after laying new eggs, taking around 60 per cent of the colony with her.

The remaining bees stay in the hive to nurture a new queen, while the original queen and her swarm look for new digs. It’s a dangerous time for a swarm, who are flying on the honey in their stomachs, and are vulnerable to sudden bad weather, so a quick rescue by professional bee-keepers can often save the lives of tens of thousands of bees.

Jessie says she loves the adrenaline rush of rescuing a wild swarm. “Yesterday I had to climb to the top of a pohutukawa tree to rescue a swarm,” she recounts. “One person brought out a ladder for me to use, another a saw to chop the branch and another person water, because it’s hot work. It was a big swarm and there were bees everywhere! Everyone stayed until the bees were safely in a new hive, and it felt like a good team effort. I hope it made their day a little more interesting.” The city is a surprisingly rich environment for bee-keeping. Photo / Supplied

Before they started their business, Luke and Jessie travelled around the world meeting other apiarists and learning about different bee-keeping techniques, such as the cigar-shaped woven-raffia hives in Mexico that are based on the tree trunks that wild swarms often make their homes in.

“It was so interesting to see that so many different cultures all over the world have been using honey in their medicine, cooking and lives for thousands of years,” says Luke. “When archaeologists dug up [ancient Egyptian] mummies they found pots of honey inside, because honey was a gift for the gods.” Even more surprising was the fact that the 4000-year-old honey was still edible, because its concentrated sugars prevent decay.

This year, they’ll be creating a balcony garden at the New Zealand Flower and Garden Show, to let people experience first-hand how central city-style bee-keeping can look, and to help break down the myth that stings are inevitable if you have a beehive in a small space.

Luke says there’s a deep sense of reward from caring for the creatures who play such an important role in our eco-system. “I love the sweet smell of honey wafting from the hives on a hot summer day, and the feeling you get when opening a hive and pulling out a frame loaded full of healthy, calm bees,” he says. “That feeling of satisfaction after a hard day of working in the hives knowing that our little bees are strong, safe and loved.”

How To Arrange & Style A Vase Of Romantic Wildflowers

Take an informed approach to styling your next floral arrangement

Why Composting Should be Your New Passion