Hidden on one of the fingers of water that extend back from the Orakei Basin, Catherine David and Michel Neeff’s backyard must be one of the most picturesque in Auckland. The compact piece of land, which the couple bought to build on nearly 20 years ago, overlooks a wide tidal inlet populated by ducks, pukeko, herons and even occasional rare native wanderers like kotuku and spoonbill.

Catherine — an architect and product designer by trade — designed their three-storey, clean-lined home herself, with large east-facing windows to make the most of the view. But although their property extended right down to the water’s edge, because it was boggy and somewhat overgrown, they spent little time at the bottom of the garden until they re-landscaped last year.

Years of watching the estuary birds create circular ripples on the water as they moved around, as well as the patterns of rain falling on the water, gave Catherine the sense that a series of circular decks would be the perfect fit for the backyard, “even though you don’t actually see a lot of round decks”. 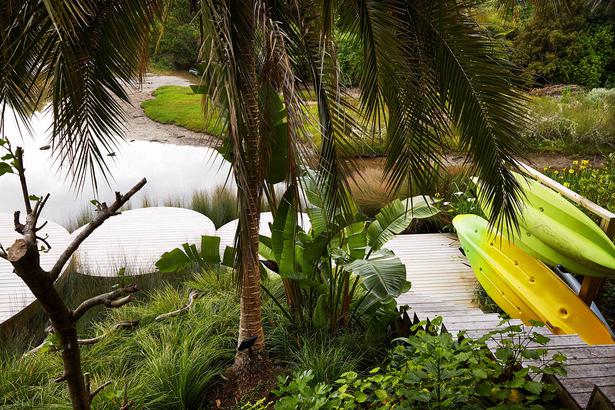 The decks are designed to look like water lillies. Photo / Rebecca Zephyr Thomas

Catherine had clear ideas about how she wanted the decking to look, but she called in designer Kirsten Sachs from Green Image Landscaping to work with her on the plantings and overall landscape design. “We decided we wanted something really lovely to look down on from the house, and I wanted a resort feel as well,” she explains.

“The decks are supposed to look like water lilies, and when you come down, it’s supposed to be a journey, where you walk down the steps on one side, and you go back up the steps on the other.”

The trio of wooden decks sit gently on the natural formation of the coastline. “The whole idea is that it’s removable if need be,” says Catherine. Rising sea levels from climate change are less likely to be the impetus for moving the decks than the council deciding to make changes to building regulations at the water’s edge. 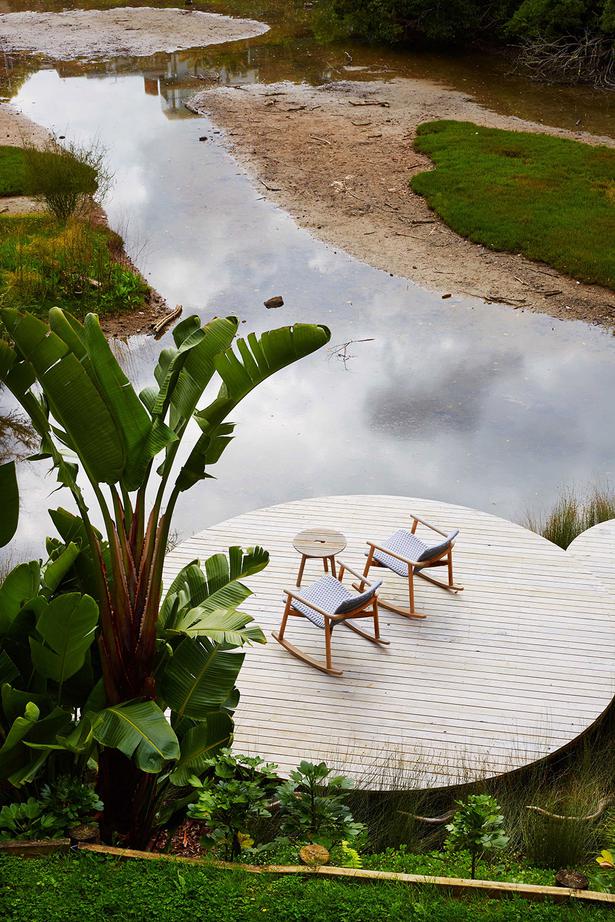 The couple have owned the land for nearly 20 years. Photo / Rebecca Zephyr Thomas

As there were already a range of established plants at the water’s edge, including Cape Reinga lilies and papyrus grass, Kirsten “recycled” some of the existing greenery by digging it up and replanting it in massed swathes.

Deep green native oioi reeds were added to mimic the rippling movement of the water and act as a natural filtration and stability system at the water’s edge. A well-established banana palm was left where it was and hardy, creeping ground covers and a row of native grislinia was added to grow in as a hedge.

Snaking through the oioi at the rear edge of the deck is a set of cast metal eels created by artist Sam Ludden. Catherine had seen his work at the Moko gallery at Hot Water Beach, where the couple own a holiday home, and decided to commission him a site-specific work. 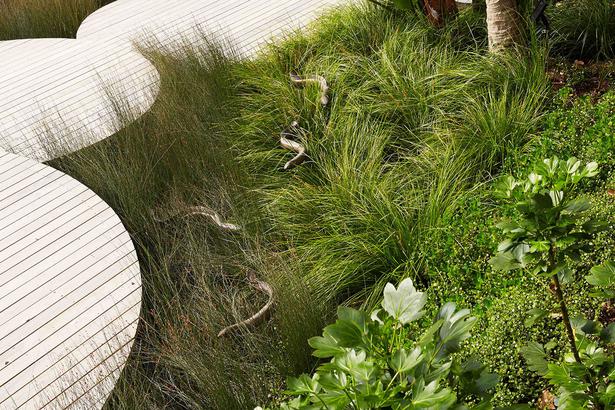 The eels are often accompanied in the reeds by Catherine and Michel’s three-legged cat, George, who spends much of his post-amputation recovery time relaxing in the sun on the lily-pad decks.

Two outdoor rocking chairs were an end-of-line find by Catherine, who is a bit of a sourcing expert, having pulled together an eclectic interior collection for the couple’s home, as well as doing the interior design for ENT Associates, the medical practice that Michel co-founded in Remuera.

The chairs are likely to get extensive use through the summer as Catherine, Michel and their friends sit and enjoy the native birdlife, which Catherine says has flourished over the years. “There are so many more birds around these days. I think Tiritiri Matangi [an island sanctuary for native birdlife in the Hauraki Gulf] has done Auckland a huge service in increasing the native bird life.” The landscaping has given a new lease of life to their outdoor space, she says. “Before this, I hardly used to come down here. I might have come down two or three times a year, and now I’m down here every day. It’s a suntrap in the mornings.

Sometimes in winter I just lie spreadeagled here on the deck.” If Catherine and Michel are feeling energetic and the tide is in, they can cast off directly from the deck in their kayaks, and paddle up the river to the Orakei Basin.

They plan to spend the summer evenings enjoying drinks on the deck and enjoying the feeling of being outside of the city, while still in it. “We wanted this to feel like a tropical resort paradise,” says Catherine. “I think we’ve achieved it.”