When the idea of worm farming leaves you with a tinge of excitement, you realise the woman you have been chatting to for the past few hours has left an indelible mark on your soul and an urge to grow vegetables everywhere.

But back to the worms.

“They’ll eat anything, bones, citrus, paper . . . the only thing they won’t munch are shells: well if you leave them long enough, they’ll get through them eventually,” says organic food farming guru Claire Mummery from her Waiheke oceanfront haven, a sheltered pocket of Church Bay.

She plunges her hands in between the squirming pink invertebrates and fingers the soil like it’s gold.

“This is worm cast. Just a little of this placed near the roots when you’re planting will keep plants healthy and helps them cope with the elements.”

Earthworms are the good soldiers underfoot who turn organic matter into rich humus. They turn minerals and nutrients into plant-accessible forms of nitrogen, phosphate and potassium.

This is good news for me, because I just buried our dead chicken Rose beside a newly planted rose bush, and am hoping the worms turn her into potent flower power.

Claire’s vermicast (worm farm) system — they’re available from most hardware stores — is a layered stack. She loads the top layer daily with kitchen scraps and from below the hungry worms appear to gobble it up. Underneath the layers of vermicast and waste, a tap drains a potent juice from the organic matter pile, which can also be applied to the garden.

As rich in organic farming knowledge as her compost pile is in microbes, Claire has been building up knowledge for the past 30 years.

She says the best tasting fruit and vegetables —which anyone can grow, even in the city — start with quality soil, and require no weedkiller or chemical additions. “If you don’t believe in climate change, you’d better start. I’ve recorded weather patterns and plant growth for the past decade and what I can say is, it’s wetter and there has been a scourge of pests and disease. Chemical sprays have made it worse, of course.

“Just look the guava moth (an Australian invader). It’s our biggest pest now, and it’s in everything, lemons, feijoas, apples — even after a council-driven blanket spray in West Auckland 15 years ago.”

One of Claire’s goals for her new clients is to steer them away from chemical use.

She says the Netflix show Sustainable is food for thought, looking at America’s food system and the agricultural issues we all face — soil loss, water depletion, climate change and pesticide use, and how they are all intertwined.

“My passion is to inspire people to grow food in an organic, sustainable way. When people look to the internet for knowledge on how to do this, it’s too overwhelming, there’s so much information. I invite people to contact me through my Facebook page for advice. Anyone can reach me.”

One of Claire’s own big “ah ha” moments came after meeting Dr Ravi Sangakarra from the University of Peradeniya in Sri Lanka, who visited her while she was creating Poderi Crisci’s garden. Dr Ravi (who died recently in a tragic accident) was a believer in effective micro-organism research, which began in Japan 30 years ago.

The EM product, developed by Dr. Teruo Higa in Japan in 1982, contains a number of strains of beneficial microorganisms including lactic acid bacteria, yeast and phototrophic bacteria, that all work together to ferment organic substances. This rich microbial concoction can be sprayed on crops and home gardens and Claire says it’s magic at restoring soil quality.

“Think of it like probiotics for humans,” she says.

EM can be also be used in animal farming — spraying it in the chicken coop will reduce bad odours and ferment organic matter, and it can be used to clean up septic tanks and waterways.

Another advantage of EM is that it allows plants to directly absorb amino acids from their roots, which leads to fruit and vegetables with higher sugar levels — and of course they’re tastier.

Composting is another one of Claire’s specialities and she teaches workshops year round. She’s a fan of the bokashi composting system, which she first learned about 11 years ago.

She hustles me down the garden path to take a look in her compost bin. I’m preparing myself for a putrid whiff when she opens the sealed lid, but, surprisingly, it smells more like pickled vegetables.

The key to the bokashi system is a sealed lid and the addition of “Zing,” a powder containing EM that ferments the waste into compost in almost half the time compared with regular composting systems. 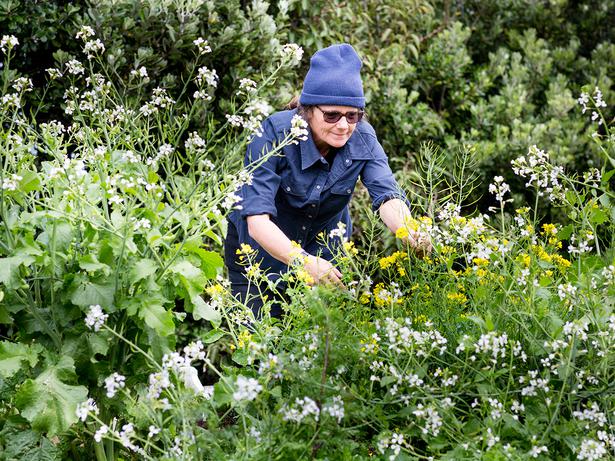 Bokashi, translated as “fermented organic matter,” was developed in Japan, in response to the huge amount of food waste in their highly populated urban environments. Even here in New Zealand up to 50 per cent of our waste is food, so it makes sense we should be composting, Claire says.

For a small amount of kitchen waste, she recommends buying a standard Bokashi system — made up of two buckets that fit tightly inside each other — The top bucket has holes in the bottom of it.

Every time you put the food into this bucket add a tablespoon of ‘zing’ and squash it all down. A small amount of liquid will drain into the bottom bucket, which can be used as as fertiliser.

Composting, worm farming and applying EM to your garden will guarantee a bumper crop says Claire.

She has many other tricks up her sleeve and enourages people to join her Facebook page for weekly growing tips and updates.

For example, she advises putting seeds in the ground when the moon is in it’s waxing (growing) phase — ”they’ll grow much faster than if the moon is waning”. If you are starting out with your first garden, start by writing a list of food you want to eat.

If you are in an apartment with a small outdoor space, a raised vegetable bed kitset from youy local hardware store is a good start. Remember to focus on soil quality and good crops will follow. 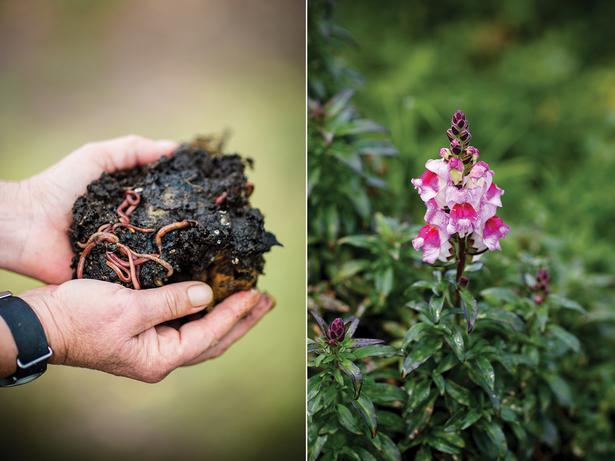 For larger gardens, Claire advises ensuring plant diversity. For example. growing nasturtium and calendula near your fruit trees will draw whiteflies and greenflies away, while creating a wildflower grove for bees is beneficial for pollination.

READ: Why New Zealand Manuka Honey is in High Demand

Some vegetables and flowers are good plant companions. “Marigolds, tomatoes, basil, chilli and capsicums are friends — the marigolds will draw the bugs away from the basil. Zucchini, cucumber, beans, corn and pumpkins are also friends.”

If you are growing an orchard, remember to plant fruit trees at least three metres apart to ensure decent airflow — this is vital for reducing insect populations.

Keep fruit trees small, four metres high at a maximum, so you can net them in that final stages of fruiting —and a smaller size makes for easier harvesting. Picking up dropped fruit will prevent pest accumulation and the spread of disease

If you are lucky enough to have a greenhouse, opt for a locally made house, she says, as many of the imported Chinese plastic houses disintegrate in our climate. She also advocates buying heirloom seeds and vegetables, as they are more likely to be successful.

Another tip is to leave plants you have bought from a nursery outside for a few days before planting so they can acclimatise.

And one last word on soil: have your soil tested so you know what to add or take away. Claire recommends the Reams soil test.

Her passion for growing is catching and as she drives me up her treacherous, slip-damaged driveway back to the ferry, she shares a quote from Audrey Hepburn: “To plant a garden is to believe in tomorrow.” 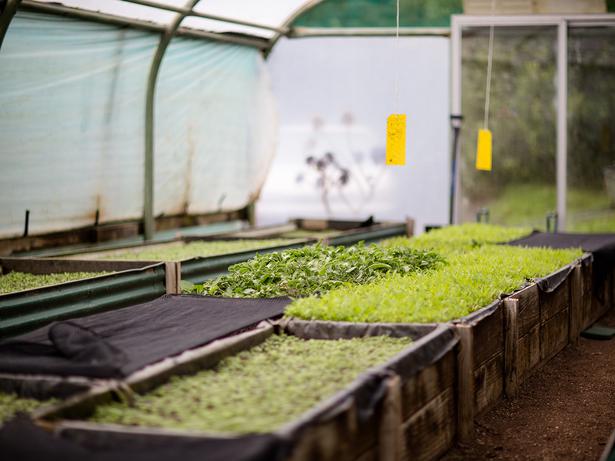 CLAIRE'S OCTOBER GROWING TIPS
October is a great month to scatter wild flower seeds: the flowers attract bees and beneficial insects to your garden. They’ll help to support and protect your planting later in the season.

Sow beans as the ground begins to warm up this month. Choose a sunny spot and plant alongside zucchini and cucumber, as they support and enhance one another.

Warmer weather brings pests and the very first cycle are starting to hatch. Spray your plants with liquid kelp and garlic to catch them early and keep them at bay.

Remember citrus trees are hungry at this time of year, as fruit is coming to an end and new flowers begin to blossom. Feed them with a good nutrient-rich fertiliser to prevent leaves from yellowing and enable new, healthy fruit to form.

READ: How to Grow Your Own Microgreens

As the curly leaf fungus starts to take hold of your peach tree this month, the best organic method I’ve found through trial and error is to hang banana skins over your branches. It’s not a scientifically proven method, but the skins are high in potassium and manganese, and these two minerals appear to strengthen the tree in its fight against curly leaf.

Give it a try!

• Claire offers workshops, garden plans, and growing advice through her Facebook page and at growinspired.co.nz. You can attend her workshops in composting and worm farming at the Jassy Dean Garden Festival on Waiheke, November 11-12.

Seven Places to Pick Your Own Summer Berries