The concept of home is changing just as fast as the way that we work. Living the suburban dream where there’s a quick commute to the office is anachronistic. Section sizes are shrinking, traffic queues are growing and mobile technology is blending our work/home environment.

Matthew Smith lives and breathes the real estate game. The line between business and pleasure is often blurred. Clients are friends, friends become clients. So with no real clocking-off time, it made good financial and lifestyle sense that his office be one and the same as his home.

Converting a double-storey Victorian terrace in the heart of Devonport was a solution that allowed Matthew, who owns the Ray White franchise in the village, a presence on the high street — and a place to hang his hat. It was also a prime opportunity for self-expression. “Matthew doesn’t do anything by halves. His attention to detail is verging on the obsessive,” says interior designer Janice Kumar Ward, of Macintosh Harris Design.

She worked in conjunction with Paul Macintosh to restore and transform the building that began life as a pharmacy. “It was built in 1888 with brick walls and a classic tin roof,” Janice says. A frozen yoghurt store was the most recent tenant in the mixed-use property and time had not been kind. “We made the decision to strip everything back to the bare bones.”

What was meant to be a two-month project became a year-long endeavour. “There isn’t a single surface that hasn’t been touched,” Matthew says. Tiles were lifted to reveal original kauri floors, the window joinery was replaced, paint and plaster was sandblasted off the walls, ceilings were restored with decorative plasterwork and, in the downstairs living zone, a modern take on wainscot panelling installed. 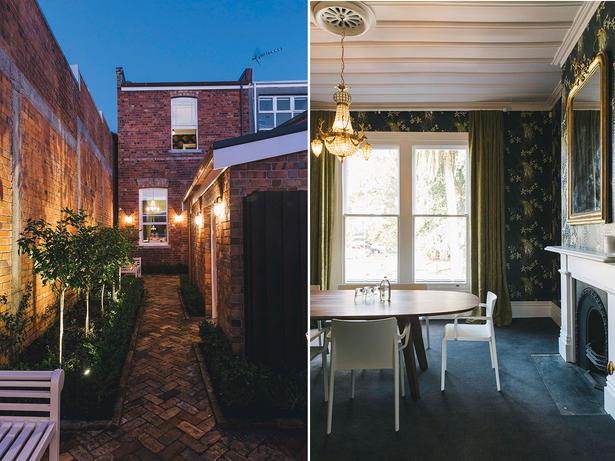 Behind the house, in the narrow courtyard, there was also plenty of work to be done. “It looked like the yard from Steptoe and Son,” Matthew says. The only thing that was salvageable was a concrete planter. That’s now the base to a two-tiered antique fountain — another feature in keeping with the home’s Victorian provenance. The basement, once used for storing drugs and medicines, has been converted to a generous wine cellar.
“One day we’ll put a table and chairs down there for entertaining,” Janice says.

Such extensive refurbishment took time, but what was even more long-winded was sourcing the period pieces to give the spaces authenticity. Matthew and Janice spent months driving between hardware suppliers and antique dealers looking for just the right fixtures and accessories. Exquisite veined slabs of Arabescato white marble were hand-selected for the kitchen bench and the laundry counter. Second-hand bricks, sourced by builder Don Walker, were used to rebuild the annex, and vintage marine copper lights from Japanese ships were found in New Plymouth.

“We even had the brass cabinetry handles custom-made and sourced period-style sockets and light switches,”Janice says. 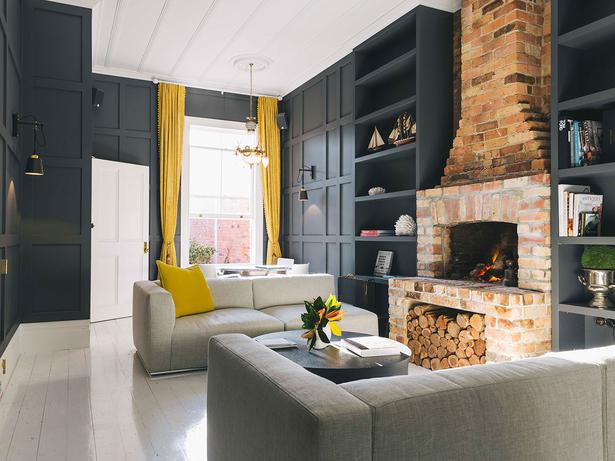 Bespoke gold velvet curtains with a bauble fringe and the reconditioned antique chandeliers from Yvonne Sanders Antiques bring in the bling factor that, happily, is in keeping with the Ray White colour scheme. Upstairs in the library the drama is amped up. Cole & Son wallpaper resplendent with an ostentation of peacocks is over-the-top glorious.

“The architecture meant that we’d never be able to do the light and breezy look so dark, cosy and dramatic was the way to go,” explains Janice. Still when Matthew chose wallpaper for the bedroom that was festooned with a large print of old-fashioned roses, she hesitated. “We did have a fight about that one.” The neighbourhood cat approves of his choice. He’s often found snuggled up in the duvet.

The result of such fanaticism for detail is an elegant, opulent and supremely practical place to lead a double-life. Matthew and his girlfriend Hannah divide their time between Waiheke Island and Devonport. Their upstairs apartment is private with a bird’s eye view over the rooftops of the village.

Downstairs they can host clients or friends either in the Great Gadsby-style summer house in the courtyard, or with a glass of fine pinot in front of the fireplace. “In the mornings, I love looking across to the park or sitting at the kitchen bench with a coffee watching commuters on their way to the ferry,” says Matthew. “Being right in the village, I feel part of the action and it gives me a real sense of what’s happening in the community.” Admittedly, not much cooking takes place in the kitchen although the coffee machine works overtime. The couple tends to head off for a breakfast of blueberry pancakes at Manuka just along the street and a favourite spot for dinner is Devon on the Wharf. “It’s a great place for champagne cocktails at sunset, sitting at the bar and looking over to the city.”

The kitchen, just beyond the front door, is the physical heart of the home — and office. Matthew and his two colleagues set up base perched on bar stools with laptops on the bench. Behind the panelled wall that divides this space from the stairwell is secret storage — the printers and paraphernalia that makes things tick.

Matthew, who has a 12-year lease on the property, is adamant his investment is worth it. “Yes it’s my city home but a lot of other people benefit, too.” While he and his two colleagues get to operate from an environment that is luxurious and comfortable, clients find the space far more welcoming than a stark, overly branded office. The downstairs and library is also offered as a venue for important community events free of charge. “It’s about changing our thinking about how we live and work,” says Matthew. And, with a shortage of housing and the rising cost of commercial rentals, it’s an idea that might very well catch on.

The Intuitive Fragrance Freeing You Up To Have Fun

Why Wicker Is Cool Again