In 1960, Robin Rockel, town planner and architect, wrote that he saw the ‘town as the larger home of the community’, and that apartment blocks such as his recently completed Seymour Flats (now Seymour Apartments) also had their place in the then largely suburban development of New Zealand cities.

Fast forward 40 years, and Claris Harvey and Nathan Price chose to purchase an apartment in the Seymour block after many years of living a peripatetic existence between Europe and New Zealand. While this experience had taught them the practicality of living centrally, it had also focused attention on the intangible.

As Harvey expressed it, "We really came to appreciate the sense of community that comes with living in a block. We mightn’t know each other, but we are in some way or another living parallel lives."

Finding an unmodernised apartment in a building with notable architecture clinched the decision to make New Zealand their primary home. "We’d already discovered we didn’t need a huge amount of space, but we did need outlook and light. These apartments are not big, but they have huge views."

All face north, and those on the higher levels, such as Harvey and Price’s, have unobstructed views of the Waitemata Harbour across the tumbling roofs of nearby houses. Even those on the lower levels, especially on the north-easterly corner, enjoy glimpses of the same views through the forward placement of the dominant design motif, the large bay windows on each of the exterior corners. These bays also provide small southerly views back towards the Jervois Road ridge.

Harvey and Price’s apartment is sited on the north-westerly corner of the block. A large sitting room, made more spacious by the presence of that generous bay, wraps this outer corner, with a small rectangular kitchen separated from the living area by a lightweight partition wall lying to the rear. An opening in the wall between the kitchen and living area is the only change to the original layout. Behind the kitchen lies the bathroom and laundry. Unusually for the era, all of the flats in this building were equipped with internal laundries as well as the more usual shared amenity on the ground floor.

Both of these utilitarian areas are lined with floor-to-ceiling storage. Cupboards, too, in effect form walls between the two bedrooms and the hallway that adjoins the common stairwell. This amount of storage was uncommon in New Zealand at the time, and exemplifies the ‘functional wall’ technique
so apparent in contemporaneous Le Corbusier-designed apartments.

The side-effect of this generous storage is that sound transmission is not a problem, which Harvey particularly relishes. "The small sounds around are gentle and pleasant, but no one wants to be disturbed by an uncontrollable noise level." Reinforced concrete floor plates some 300mm thick further dampen noise between the levels.

Externally, the building displays its Modernist aspirations with pride, with splayed piloti enclosing undercover parking for six cars, and bands of blue glass inserting themselves in a confident rhythm around the bottom of the bays. Unlike spandrel panels — glazed elements in multi-storeyed buildings intended to cover unsightly floor junctions — these are purely decorative, and can be viewed as clearly from the interior as from outside. Harvey and Price have exposed this feature, and enjoy the way riverine blue light finds its way across their floor.

The combinations of bi-fold, sliding and awning-hung windows are practical as well as handsome. All were designed with the intent that the occupier could clean their own windows from the inside, a feat Harvey admits would require a certain degree of athleticism, but, like the easily accessible window boxes, are a feature as contemporary today as when first designed 60 years ago.

Harvey and Price intend to modernise, but gently. "We see it more as massage than modernisation. We will retain almost everything, just repair the damage and look for fittings that would be in keeping. I think the windows will have to be double-glazed but not so they look any different to what they do now."

As it stands, here is an example of architectural courage that has stood the test of time. Embracing the human need for light, space and flow, while simultaneously paying careful attention to the practicalities of living in a small space, it has proved that longevity can be gained without sacrificing convenience or quality of life. 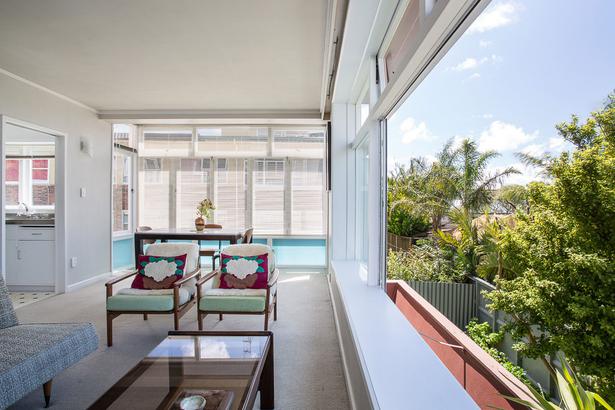 Deborah Cox’s apartment on the opposite corner and on a level higher to Harvey and Price’s couldn’t be more different.

Being on the north-east corner of the block, the views of the Waitemata, the harbour bridge and St Marys Bay are unobstructed, and a small view from the south-facing corner of the bay allows a clear line of sight up Seymour St to the junction of Jervois Rd. The band of blue glass, exposed in the interior of the Harvey-Price apartment, is in this case concealed, with insulation and lining minimising heat loss.

Identical in floor plan but a mirror image of the Harvey-Price apartment, it, too, had seen very little modernisation before Cox commissioned interior designer Leonie von Sturmer to refurbish the interior. Not wishing to detract from the good bones of the original layout, but looking to maximise access to the views and outlook, von Sturmer removed the wall between the kitchen and living room, and by doing so created an interior with a passing nod towards the design mores of the contemporary studio (as opposed to the two-bedder it in fact is.)

No more than a streamlined kitchen island unit indicates the zones between the different functions. Cox feels that this gives the user of the kitchen "equal privileges". "I couldn’t imagine working behind a wall with the beauty of what you can see outside concealed from me."

The bathroom and adjacent laundry are located where they always were to the rear of the kitchen, but are now sleekly contemporary.

Sleek, too, are the doors of the storage wall which lines the small hallway to this area, with smooth surfaces bouncing light into the only area of the flat which does not have its own window. The laundry is located here as it always was, but is now concealed behind the cabinetry of this general utility area.

Both bedrooms have been comprehensively refurbished, but the dimensions are unchanged. The original floor-to-ceiling built-in storage lining the walls makes for a simple floor plan, as well as excellent sound-proofing properties between the bedrooms. Varying shades of soft and subtle pastels — green, blue and grey — enlivened by textural changes in the same restrained palette, pleasantly unify the public and private spheres.

No discussion of this block would be complete without a mention of the stairwell. Unsophisticated insofar as it lacks a lift and with surfaces
plainly exposed, it is nevertheless a masterpiece of shadow-play. A sinuous matai handrail and simple metal balusters, a skylight which filters soft sunlight through the levels, and an entrance porch straight out of a Grace Kelly movie, here is the jewel in the crown — film noir recreated on Herne Bay’s sunny northern slopes.

Design notes
• Large bay windows allow views in three directions, while the bands of blue glass that define them are the dominant external design feature.
• The selection of windows, although original, appear almost incongruously contemporary. When open, they embrace the outside world in a way almost unthought of in the time they were designed.
• "Functional" walls offer a practical amount of storage and almost complete acoustical insulation between public and private spaces.

The way we lived back then

A book that examines the critical thinking behind state housing offers an intriguing insight into the way we lived back then — ...