There’s a bath in the hallway of the M+M House, an architecturally designed eco-home on a wild stretch of Taranaki beachfront. The house was a Western branch winner at the Te Kahui Whaihanga New Zealand Institute of Architects Local Awards, where judge and fellow architect Darren Shadbolt called it “serene, earthy and elegant”, an opinion its first-home owners no doubt share.

At 120 square metres, it may be small but it can sleep up to four couples, thanks to a small studio connected to the main dwelling pod by a covered courtyard. Then there’s that cavity-slider-protected, space-saving solution for tub-soaking — provided there’s been plenty of rain to fill the tanks, of course.

Its petite footprint is just one of the ways in which Murali Bhaskar and Emily Batchelor of Boon architects minimised the home’s environmental impact, reflecting a nationwide shift away from cavernous manors and toward considered smaller homes.

Like its adjacent sister dwellings, the award-winning Twigley Bach and another minute holiday home Murali has designed for his family, the M+M Home uses rainwater-harvesting water tanks and secondary effluent treatment plants populated by tiger worms; the by-product is discharged as fertiliser on to the landscape. 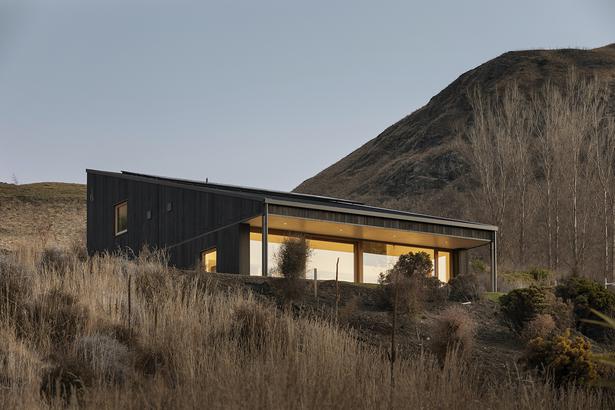 Solar panels ensure the Wi-Fi doesn’t drop out, and the house has the capacity to one day go off-grid. There are also plans to create a communal garden and hothouse, so each of the occupants can produce what they wish to eat.

Optimising our lifestyles in a communal sense is vital, says Murali, and eco-homes provide the opportunity to do that. “The pros are huge. It’s not just about a good feeling, it’s making sure that what you touch on the earth is acknowledged, that you respect the earth and the environment around it.”

The prohibitive costs associated with eco new builds are slowly diminishing, as more architects and their green-minded clients demand sustainable materials and building principles. As is the idea that to live in an earth-conscious way means an ascetic existence subsisting in a draughty yurt devoid of creature comforts.

Sustainable can still be luxurious. Energy-efficient power sources are now used to generate underfloor heating, smaller floor plans mean less housework, and the beauty of planet-friendly materials is increasingly being appreciated. While a roof filled with solar panels might not appeal to one person, says Murali, recycled timbers and other repurposed materials can inform a stylish design. 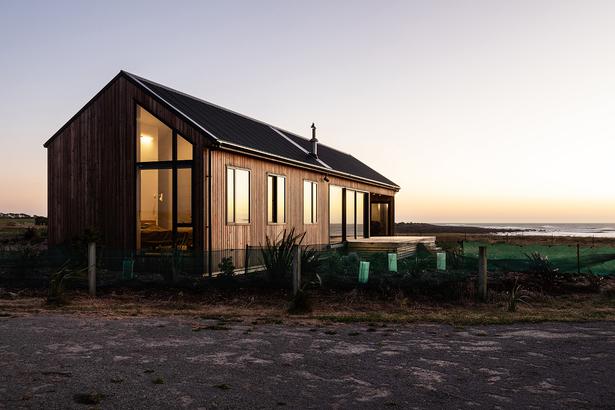 “It will tell a greater story than if you buy off the shelf,” he says. “You might like the look of a certain type of cladding but not think about the high embodied energy it represents, the negative impact it had on the environment during its manufacture.”

Eco-living is perhaps better described as a return to nature and a simpler way of life — Maori have talked for centuries about the importance of treading lightly on the earth. As New Zealanders face a housing crisis that calls for the construction of cheap-to-build urban homes in their thousands, and homeowners look for ways to lessen their own impact, we still need exemplars of eco-conscious design.

These are homes that take advantage of power-, water- and heat-preserving products (such as thermally broken windows, low-energy LED lighting and dual flush systems), and minimise power usage by maximising insulation to avoid thermal leakage.

As part of their mission to build warm, healthy homes for a variety of budgets, Queenstown-based Team Green Architects have been looking at ways to make sustainable design more affordable (the most obvious by positioning homes to face north wherever possible). 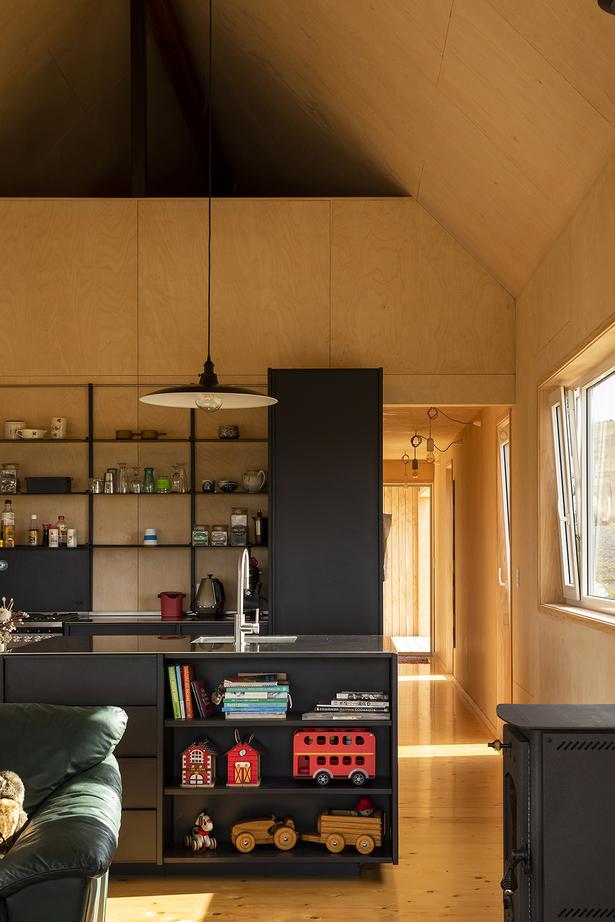 Co-founding architect Sian Taylor designed Threepwood Passive House for her family of three to live in, and won a Southern branch small project architecture award for its “delightful” split-level form and attention to detail, according to jury convener and architect Rafe Maclean. Its bach-scale size is all the house they need, she says, with sleeping spaces at ground level, and a flexible self-contained space upstairs. Sian and her partner currently use it as an office, meaning they’ve all but eliminated their commute to work.

“Our house demonstrates what people are thinking about at the moment,” says Sian. “Which is recognising the fact you can build a passive house and not compromise on architecture.”

Ironically, given the nature of the work she does for her clients, Sian and her family previously lived in a freezing, south-facing 1980s dwelling. Severe condensation on the windows often obscured the lovely view. That provided the impetus to design a certified passive house (whereby homes must reach predetermined levels of warmth and comfort while using very low energy).

Threepwood uses 95 per cent less energy than a typical building, and has no heating system yet stays consistently cosy due to triple glazing, clever insulation and an advanced ventilation system that acts like the lungs of the house. In the height of summer it stays cool thanks to a big eave that, come winter, still allows the lower sun to penetrate. 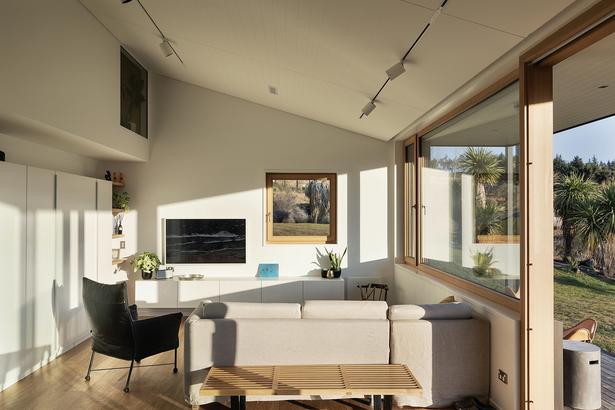 Threepwood Passive House is bach-scale in size but big on detail. Photo / Supplied

Even if they tried, says Sian, they couldn’t get through the power the house generates through its PV solar panels on the roof. “I think of the house like a sundial,” she says. “Ultimately it’s about building something that’s enhancing the environment as opposed to working against it.”

The process starts way back when a piece of land is acquired or subdivided. Get this wrong by laying foundations in a dank, south-facing gulley, she says, and anyone hoping to improve the design will be fighting a losing battle.

Ensuring homes are made with earth-friendly materials is the next step. Sian says she’d like to see improvements made to New Zealand’s Building Code, which stipulates buildings meet high seismic requirements, often leading to large uses of steel or concrete, both materials with high embodied carbon and potential to conduct heat away from the interior.

READ: Clean Up Your Act: Consider These 7 Sustainable Beauty Swaps

One alternative is laminated timber, which is more expensive and can have high levels of deflection — but it can be used in tandem with steel, so long as the latter is thoroughly insulated.

Martin Varney of Make Architects agrees. He says it’s not hard to use quality materials that have been sustainably grown within New Zealand, “and we’re seeing more and more support for that coming through”.

The Karangahake House he designed for its native forest setting won a small project architecture award for the Waikato & Bay of Plenty branch and was described by convenor and architect Camden Cummings as “well-planned and economical”. They also use more insulation than you’d expect to find in your average house. The Karangahake House has been layered with Terra Lana, a recycled and biodegradable wool insulation product. The window joinery isn’t heat-conducting aluminium but UPVC, a form of plastic produced from recycled materials. Plywood gives the interior a warm, modern feel, and there’s a wing that can accommodate guests or act as a study.

The homes’ construction phase is carefully managed, with waste minimised as much as possible on site and in the plant where they’re built.

“People often think of prefab buildings as cheaper but that’s not necessarily the case,” he says. “When you’re insulating with several layers you will invariably use more materials. But it’s not a hard sell when we talk about the payback clients realise in the long-term with less demand on energy input for heating. More importantly, it’s about being good custodians of our environment.”

In an extract from their new book, 'The Abundant Garden', Niva and Yotam Kay of Pakaraka Permaculture dish the dirt on home-rea...

Filled with objects old and new, this lakeside home's pool of character sits high above the water's edge