Martin Basher, Martha Jeffries and their 3-year-old twins spend a lot of time on the roof with its built-in slide and incredible view. Photo / Paul McCredie New Zealand expats Martin Basher and Martha Jeffries wouldn’t have picked Wellington as their place to live long term. But with their three-month summer break extending into its second year, the artist and TV director couple have fallen in love with Te Whanganui-a-Tara.

That love has a lot to do with life in a temporary apartment in the sprawling Athfield residential and office complex. Home to 20, with another 35 working at the Athfield Architects practice onsite, the complex tumbles down a hillside in Wellington’s Khandallah, a Mediterranean village transplanted to the Southern Hemisphere.

Martin describes it as a daily revelation. “Not a day goes by where I don’t discover something new and interesting. Ath’s vision was all-encompassing, experimental, and ever curious. It’s extraordinary.”

‘Ath’ is of course Ian Athfield, New Zealand’s most celebrated architect, whose philosophies on living, which bucked the norm in the 1960s when he started developing the complex, are referenced by architects today as we endeavour to build and live more sustainably. 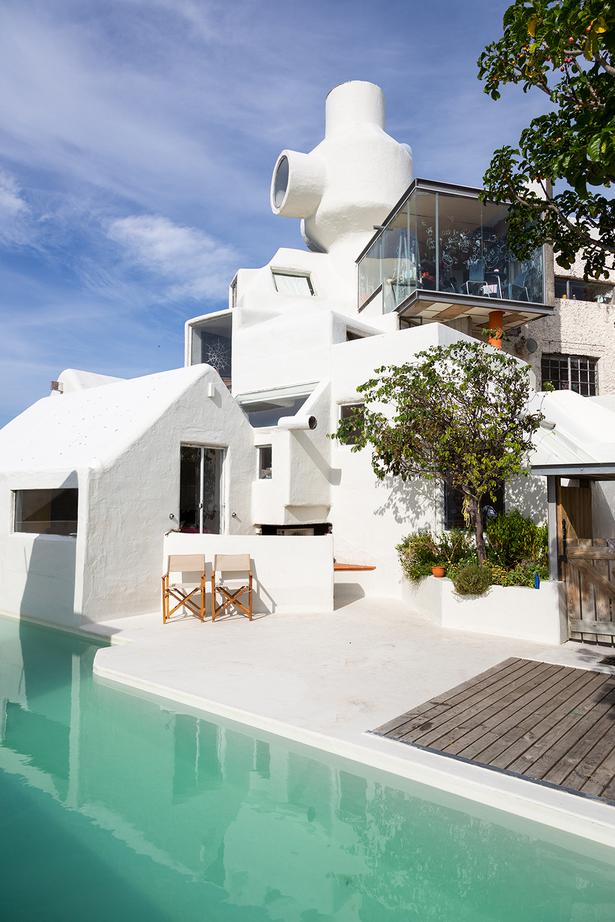 This sprawling 1960s Ian Athfield-designed complex spills down a hillside in Wellington’s Khandallah and houses both residential and commercial spaces, including Athfield Architects. Photo / Paul McCredie

“It’s been wonderful,” says Martin. “There’s a very fluid interaction between people on the hillside. Our 3-year-old twins run in a pack with the other kids here — the little ones hanging out with the big kids. There’s a lot of going back and forth to each other’s houses and they spend a lot of time on the rooftop where a slide is built into the surface.

“The children are thriving. They are living with people of all ages, and spending time with the older generation has been profound too.

READ: Inside A Stunning Waiheke Home That Appears To Float Above The Water

“Ath was deeply inspired by Mediterranean vernacular architecture — the way cliffside villages wildly spill down the hill with interconnecting walkways. Each residence is built for privacy, but like those villages there are also spaces to meet and interact with people.

"The centrepiece is the pool with an infinity edge that blends seamlessly with Wellington Harbour on a still day, and there’s a hot tub too, so it’s a social place, with dinner parties for 20, children’s birthdays, and a deep community bond.

“There’s real communality here and it was the perfect place to land after living in New York for so long where you do tend to have close relationships with your neighbours because you are on top of each other.” 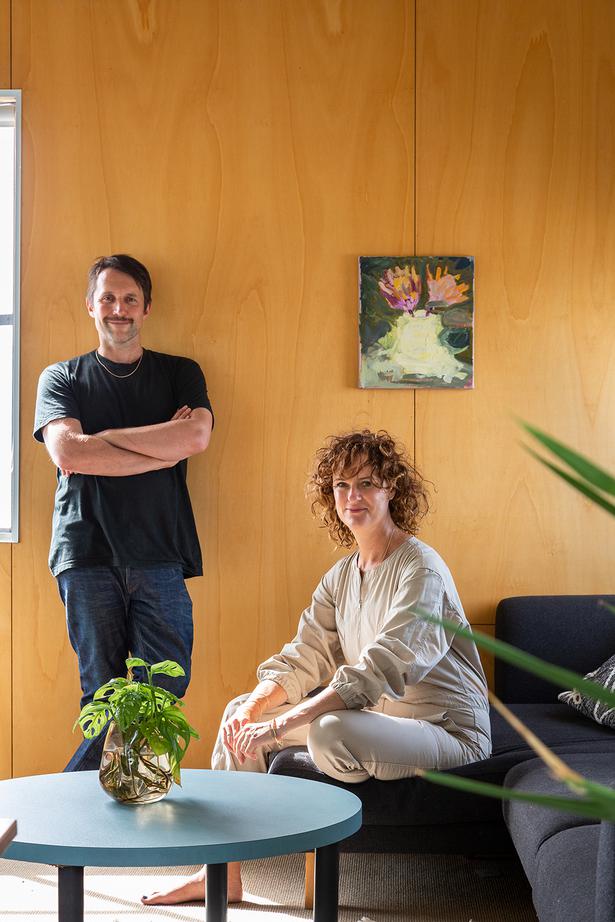 Martin and Martha both grew up in Wellington but neither have spent any adult life there. Martin moved to New York in 1999 but has maintained an active exhibition schedule in New Zealand that brought the couple together when they connected at an exhibition in Auckland in 2009. Soon after, Martha moved to New York.

Martin, a graduate of the prestigious MFA programme at New York’s Columbia University, then spent the decade exhibiting widely across the US and Europe, while Martha took her career directing and producing travel TV out of New Zealand to focus on US television, and after directing on the 2015 Emmy Award-winning climate change show Years of Living Dangerously has increasingly focused on climate communication.

With flexible careers allowing remote work, the family didn’t have to rush back to New York. Martin mounted exhibitions in Auckland and Wellington in the Athfield complex last year and has just completed ‘A Suddenly Still Life’ — four large outdoor sculptures that have been transported to Waiheke Island for the biennial Sculpture on the Gulf.

Working from a cavernous space in a warehouse within walking distance, Martin has been able to live out Athfield’s vision of a local work-life synergy. Meanwhile Martha continues to drive forward in climate communications for US and New Zealand clients. Martin in his studio working on the outdoor sculptures for Waiheke’s Sculpture on the Gulf. Photo / Paul McCredie

Shortly to launch into a new climate TV project as an executive producer, Martha explains her environmental focus: “My work on Years of Living Dangerously opened my eyes to the risk we face if we don’t act on climate change. Once you know that stuff you can’t unknow it. My life’s work now is to communicate what we can do.”

Martha acknowledges that it was an enormous privilege to be able to come back to New Zealand as the world navigated Covid and is pleased that she can contribute locally.

“In a way it was a relief to come to a country of five million with comparatively easy solutions compared to America, which is so deeply polarised, but I can’t lose sight of the big picture. My work has to appeal to a global audience, and these are really crucial years.

“It has been particularly interesting to be part of a wave of returnees. I share an office space with several other female freelancers who have also spent significant time living in America and Europe and it’s wonderful to have this talent returning to New Zealand and collaborating with each other. It was the reverse for so long.”

Indeed, the couple are at pains to acknowledge the amazing level of talent in the capital.

“It has been an epiphany to be around this level of skill and open-mindedness in Wellington,” says Martin. The interaction I have with vendors and technical supporters is terrific. Things I couldn’t do in America I can do here because it’s small and limber enough for people to come up with great solutions.” 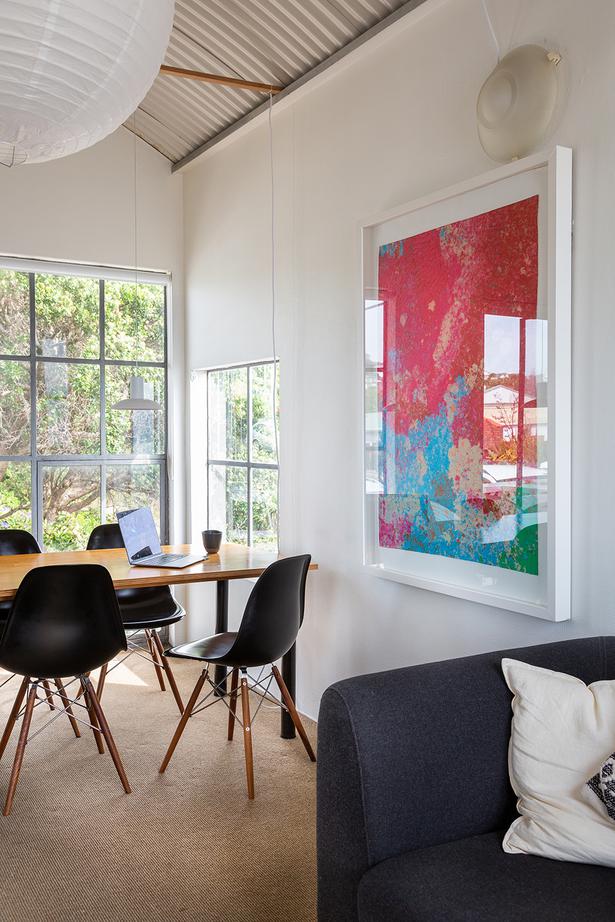 On the wall is Running 9, an oil on canvas by New Zealand artist Layla Rudneva-Mackay. Photo / Paul McCredie

He adds that New Zealand’s position in the world is running very high. “The management of Covid has shown New Zealand and its government have a high degree of competence. There is a sense that New Zealand can be a global leader, a place to innovate at a manageable small scale and set a global pace. People are really looking to New Zealand at the moment.

“Wellington has been a big surprise for us because we always assumed we needed to be in a ‘big city’ like Auckland. But Wellington has all the city buzz, while everything is so accessible. We bike everywhere and it’s a city where you can be in nature within minutes. We have discovered an incredible community. It’s an exciting time to be here and we are really inspired by it.”

Martha says it can also be bittersweet. “There is a French saying, ‘To part is to die a little,’ and I think that’s beautiful. It encapsulates that pull between two places. Every time we left New Zealand to go back to the States, we would feel that and now we have it in reverse.

“We have a whole life in New York. We brought our Birkenstocks and beach towels for a summer holiday. The rest of our life is still there. The house in New York is being sublet and our cabin in the Catskills, which Martin built, is going to the wilds.”

They say they’ve given up trying to plan and laugh that as freelancers without secure jobs they never really know what’s ahead and have always just trusted life anyway. “We tried setting dates to go back to America, but there’s always a new development that keeps us here. We’ll just take it as it comes.” 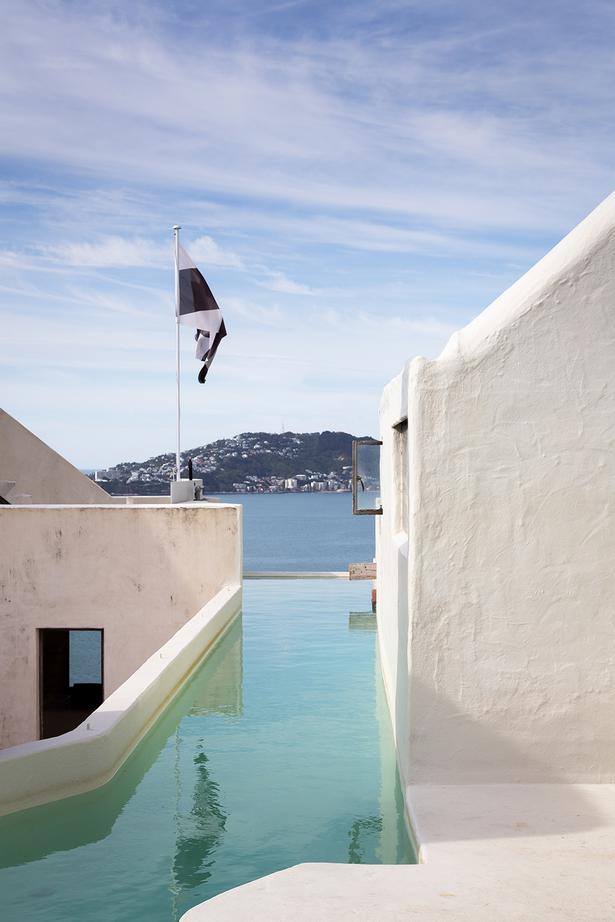 Ian Athfield was inspired by Mediterranean vernacular architecture, in particular the way cliff-side buildings spill down the hillside and connect via walkways. Photo / Paul McCredie

Martin, who is represented by Anat Ebgi in Los Angeles and Starkwhite in Auckland, is looking forward to a period without hard deadlines once his current sculptures are finished.

“It’s going to be nice to have a breather. Our careers and two little girls are a juggle, but that’s another benefit of being here — two sets of grandparents who have been an amazing support. They’re so close it’s hard to imagine moving away again.”

Looking out one of Athfield’s iconic circular windows to the extraordinary harbour and city view, the couple agree that the longer they are here the more they realise that it is starting to feel like home base.

“A lot of our heart is still in New York but one way or another part of our life will definitely be anchored to New Zealand.”

A transformation with a compelling case for lush recreational areas, and a bunker-like retreat