The Brake House is a modernist masterpiece. Photo / Simon Devitt Titirangi's Brake House, with its suspended pavilion forms, floating decks and walls of glass, is a residence of late-modernist design that is held in the highest regard by the architectural community.

Nat Cheshire, who has recently renovated the kitchen, describes it as "one of the most beautiful houses made anywhere in the world. It comes from one of those rare and beautiful moments when the right people connect. It's like a unicorn. There's really nothing else like it."

Those people are architect Ron Sang and photographer Brian Brake. Ron designed the home nearly 45 years ago for Brian and his partner Wai-man Lau (Aman), a pre-internet process of over 18 revisions between Ron in Auckland and Brian and Aman in Hong Kong. Designed to float above the bush and make the most of the distant city and harbour views, Ron describes it as "structurally ambitious with influences from the Far East."

From day one the house has been culturally diverse, with a Pacific Rim crossover, and a oneness with nature. It's these qualities that perhaps speak most to today's society.

Current owners, television presenter Eric Young and Michelle Heath Young, who refer to themselves as custodians, say that the bush setting has had an impact on their wellbeing.

"It has a positive effect, similar to that of forest bathing. We have slept in all three bedrooms to immerse ourselves in their different aspects. To wake up to a sea of green forest and bush and to watch the tui and kereru going about their day is a privileged and rewarding experience," Michelle says.

"I frequently wander the house, looking at how everything goes together and feel gratitude for everything around me. They are mindfulness moments." 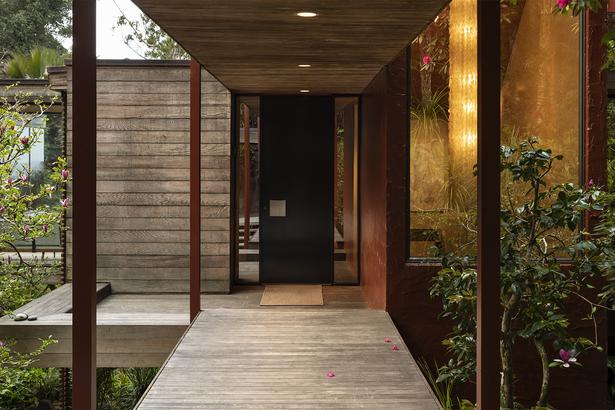 The couple are not wellbeing practitioners. "This is just what the house does to you," Eric enthuses.

"It's the most beautiful space you could ever live in. We have a saying that it's never a bad day when you come home to the Brake House; you leave everything at the top of the driveway."

That driveway is on Scenic Drive and, although you can't see the house from the road, many point it out on their way to the western beaches, ever hopeful that one day they may take a closer look.

Which is how it was for Eric, whose career was always going in one of two directions - journalism or architecture.

He chose journalism but continued his love of architecture and had always been aware of the house. 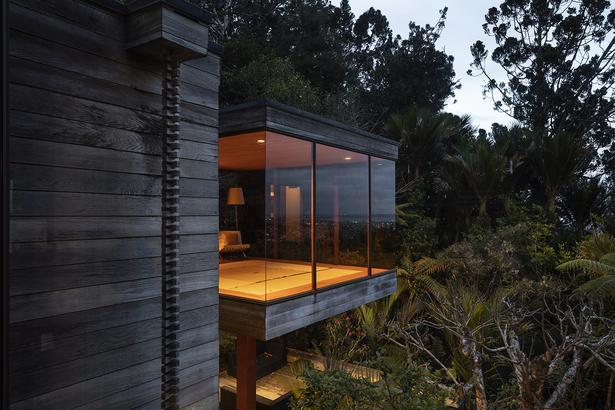 'I frequently wander the house looking at how everything goes together and feel gratitude.' - Michelle Heath Young. Photo / Simon Devitt.

"The thought of seeing the house, let alone owning it was a nonsense, it didn't even enter into my frame of reference," he states.

"One day, Michelle was showing me a bunch of houses - she was working and studying for her Masters in Commercial Law and used to scroll through real estate on the iPad to wind down — and one of them was the Brake House, I said 'oh my God, I have been in love with that house for so long, what a shame we can't afford it'. We filed it in a pocket of disappointment and moved on with our lives. Years later when we were trying to buy a home in Titirangi and constantly being outbid, Michelle joked that there was always the Brake House and there it was on Trade Me. I contacted the owner and put an offer in eight days later."

It's enough to bring out the green-eyed monster, but there's something very special about this couple and their relationship with the home that makes you genuinely happy for them and distraught that they are about to put it on the market.

They admit that depression descended upon them for a couple of weeks, but their reason for selling is a happy one — their son Alfie is 4 months old and the house is not safe for a toddler.

"Alfie is such a beautiful addition to our family, he is everything to us, and the reality is that we just can't live here with him." 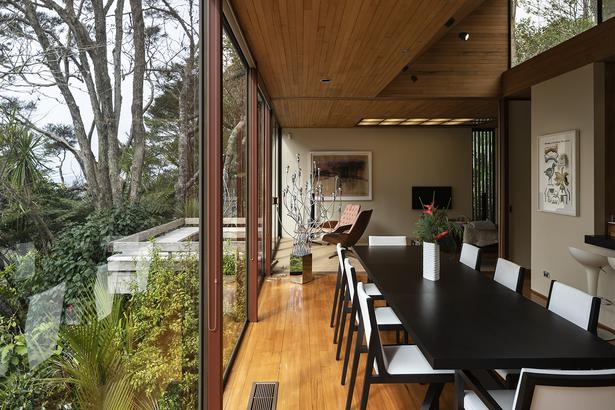 The home is filled with peace and tranquillity. Photo / Simon Devitt.

Eric stumbles over his words that blend joy with heartache.

"We thought about making it toddler-friendly, but it’s impossible to do that and still maintain the design integrity of the house."

The only structural change was the removal of a wall between the kitchen and dining area to improve flow and light.

It was after the fact, but Ron approved, and Michelle and Eric do too, saying that it adds to the enjoyment of the space. However, it was a 90s kitchen and the recently completed renovation has transformed it. 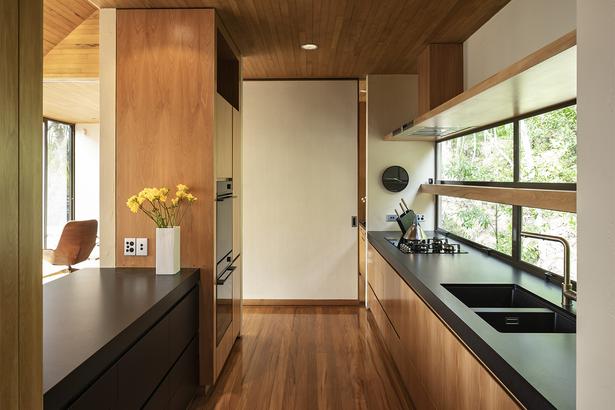 Nat started the project by talking to its creator.

"With Ron's endorsement, we built a kitchen that echoed what was originally there. It's ideologically consistent," says Nat, giving credit to colleague Aiden Thornhill for a finish that works with the rooms around it.

"Aiden found the right rimu veneer and worked carefully with our cabinetmakers to ensure consistency throughout the house."

Matt black granite benchtops take their cue from the black leather surface of the original bar adjacent to the kitchen and they are meticulously aligned.

Eric had reached out to Ron when they bought the house in 2013 and says that he has been helpful over the years. 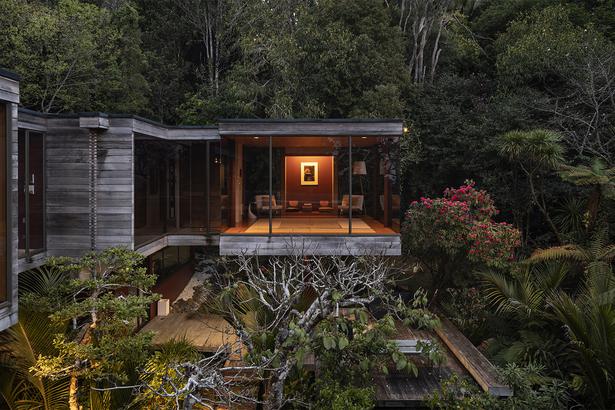 'It has a positive effect, similar to that of forest bathing. We have slept in all three bedrooms to immerse ourselves in their different aspects.' - Michelle Hath Young. Photo / Simon Devitt.

"When something needs redoing the first thing I do is phone Ron. We have had great conversations about design decisions as well. There are so many little areas in the house that make you wonder why they did it like that, and he's there with the answers. We also contacted Aman to let him know that we were taking custodianship and would look after his treasure. We have become good friends; he is a beautiful man in every sense of the word and his love for Brian still shines."

Brian worked from the ground level of the house where his studio has a long, cantilevered desk with inbuilt lightboxes and an adjacent dark room and theatre room, where he would screen his documentary films.

A vault, which housed Brian's negatives and prints, has been converted to a wine cellar.

Michelle and Eric hoped that one day these spaces could be used by a photographer in residence.

The couple are passionate about Brian's work, collecting his books and the National Geographic and Time magazines in which he was published. 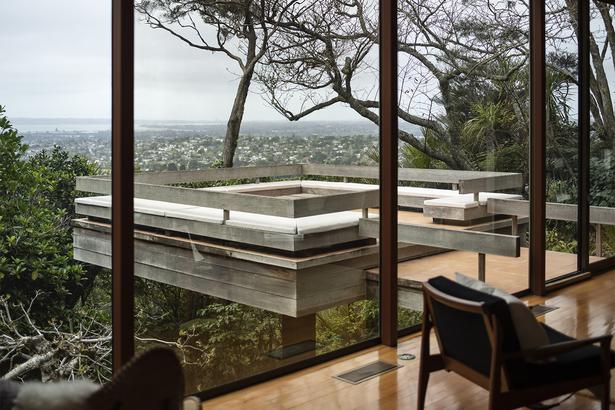 They have two of his photographs on the wall in the tatami room and have travelled in his footsteps, standing in the same spots in Japan where they were taken.

Cameras continue to be part of the house's DNA - being used as a location for photo shoots and Benee's latest video, Snail.

Brake House is a national treasure, a taonga to be cherished.

Ron Sang says it's without question one of the best houses he's done.

It received an Enduring Architecture Award from the New Zealand Institute of Architects in 2001, is identified as one of the top 20 Modern Movement buildings in New Zealand by DOCOMOMO (Documentation and Conservation of Buildings, Sites and Neighbourhoods of the Modern Movement) and, as such, has a Category 1 heritage listing.

But as Eric says, you couldn't improve on it anyway.

"You would build this house today to exactly the same specs. If you walk into the Brake House wishing to change things, you've missed the point."

• To find out more, visit Thebrakehouse.co.nz