Out with the new, in with the old. Ginny Fisher chats to local designers and tastemakers about the lasting appeal of vintage furniture and objets d’art In early courtship with my husband in New York City, over a decade ago, he tried to lure me in with his vintage Eames Lounge chair. I had no idea who Eames was but I thought my date looked quite cool reclining on that chair, smoking a cigarette.

After we were married, it became a source of annoyance as our West Village apartment was so miniscule, the ottoman would edge its way into the kitchen and I’d bump my shin on it. The cigarettes ended up in the trash, but the chair did retain some seductive appeal, a piece of furniture that stood out from the ho-hum newness of what you might find in an entry-level furniture store or the junk you would normally come across in a young man’s apartment.

Now, more than ever, consumers are rejecting the idea that everything must be shiny and new. Attribute it to Mad Men, the television series that created an insatiable appetite for mid-century modern design, the rejection of the throwaway mentality, or the resurgence of craftsmanship and sustainability, we all want a bit more vintage in our living rooms. We might not have a great story, but at least our sofa does.

There are some serious furniture-related spiels circulating in Mid Century Swag’s showroom. It is packed with treasures from New York and Los Angeles, and owner Jodi Newnham says some of her latest shipment came from a mobster’s apartment in Chicago. 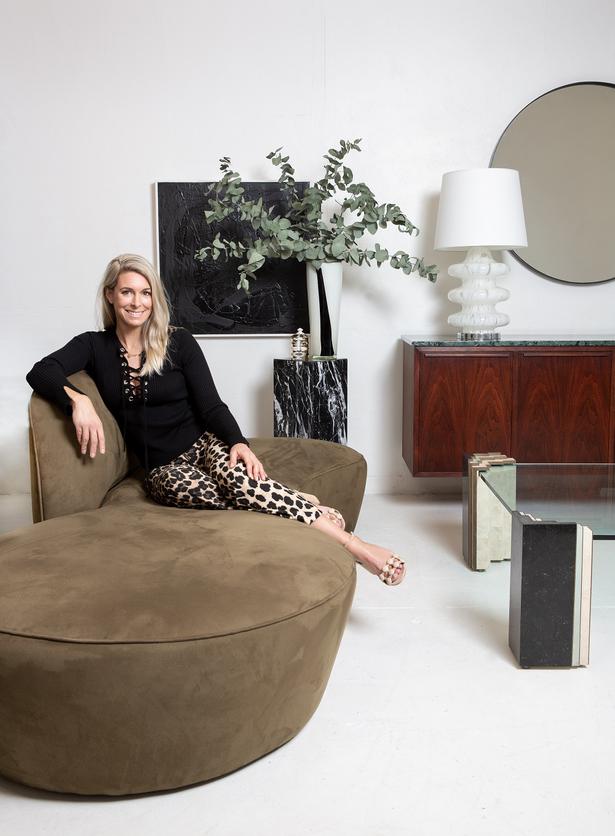 “We have some new pieces from a travertine bedroom set from Dominic Cortina’s Chicago condo, he was otherwise known as “Big Dom”, “Large” or “The Hat” and he was a high-ranking mobster for the Chicago Mafia,” says Jodi. If only those side tables could talk.

Other items in the showroom are pure art. A curved sculptural sofa in khaki by Vladamir Kagan from the 1970s (price tag $12,000) is more like a sculpture than seating, an Italian marble table looks subtlely opulent with a bouquet of hydrangeas in the same hues. I fall in love with a travertine side table — as long as it’s not Big Dom’s, and a pair of swan regency lamps ($2500), but there’s so much more here to covet.

Mid-Century Swag was formed four years ago after Jodi completed her interior design qualification. She happened to stumble on a contact that led her to an antique dealer in New York and the rest is history. Now she says she’s sourcing more from the West Coast, with shipments out of Los Angeles.

Jodi has a more than a few strings to her bow. With a degree in visual arts and a diploma in pattern making, along with extensive experience in the hospitality industry, she thinks all her adventures and diplomas combine to create a rounded creative vision. She also manages time to sell her own abstract paintings in the showroom, and recently sent one to a Parisian buyer.

“There really are no rules in interior design,” she says reclining on a Milo Baughman chair. “At interior design school we were told to stick to an era, but I say no way. I see a room like a canvas, I like to establish layers and textures and look at how the composition works. Of course it also has to be livable. Who really wants a home filled with stuff entirely from the 1970s? Personally, I like to mix styles from the 50s, 60s and 70s along with contemporary pieces.”

While some of us might not be brave enough, Jodi manages to pull it off. Her style is a little bit Kelly Wearstler — Hollywood regency infused with 70s eclecticism.

“Look, I think everyone should develop their own style. Ask yourself what you really love, and don’t be afraid to get the help of an interior designer if it’s not quite pulling together.”

She says if you’re budget constrained, save up for that one special piece and make it the hero of the room.

“It could be an art deco lamp — make that piece sing in the room, work around that.”

Her favourite period of design is unsurprisingly mid-century, from the 1930s through to the mid 60s.

“It was really a ground-breaking period in architecture and design. Architects became furniture designers, as did sculptors and artists. Creatives were really pushing boundaries with materials, and at the time all furniture was handmade in solid wood. That’s why these pieces are made to last a lifetime.” 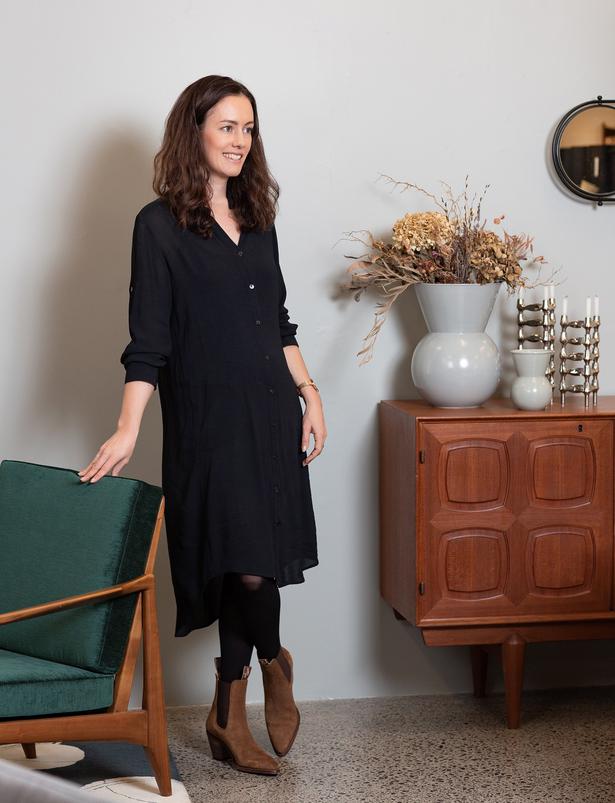 Emma and Dan Eagle are partners in life and business and they also offer an extensive range of vintage mid-century furniture in their Ponsonby store Mr Bigglesworthy. Funnily enough, they also have a chair-related courtship tale.

“I went to Dan’s flat and I could recognise and name all these unusual chairs he had collected. He had this crazy 1960s Ball chair in white that looked like it came right out of a movie. I’d studied design, so I was really surprised to see all these interesting mid-century designs in a flat. I found out later Dan had been a collector since he was a child — he started collecting old bottles when he was just 8.”

The shared love of design led to the couple opening the Ponsonby store in 2011. Most of their mid-century vintage pieces come from Denmark and the United Kingdom, but many are sourced locally and restored. They are planning to launch another New Zealand modern collection later this year, showcasing their favourite local examples of modern design from the 1950s.

“It was pretty conservative design-wise here in the 50s, but with the arrival of new immigrants and ideas from Europe, Kiwis started to experiment with new forms and materials.”

One great example was New Zealand furniture designer Garth Chester, who fast developed a Pacific expression of modernist ideals. Today many of his designs have become classics. Just recently Emma sold his Curvesse chair to a German client for $7950.

Emma says their best sellers are mid-century New Zealand folding sofas that retail for around $1500.

READ: The Viva Guide To Vintage: How To Make Vintage Fashion Feel Current

So why is it that mid-century designs haven’t come and gone like most interior trends? It’s simple elegance, ays Emma. “As the world gets more complicated, it remains appealing. There’s craftsmanship and a focus on simple forms. You can mix mid-century with a lot of interior styles because it’s not competing to be the loudest thing in the room.”

“Mid-century designs are sleek, but not too decorative. We find that is appealing to the younger market.”

Caolan also points to the 70s and 80s as design periods that are being reassessed and reclaiming popularity. 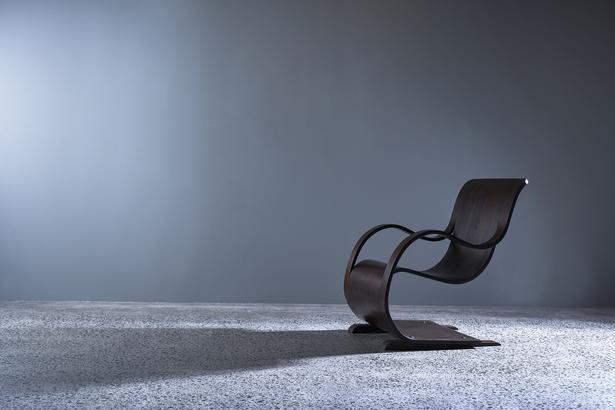 “We have a 70s Fred Lowen sofa in leather with a mahogany frame that we’re expecting to be sought after in our up-and-coming June decorative arts auction.”

Also on the block will be another Garth Chester Curvesse chair that is estimated to fetch up to $8000.

But whereas some pieces are pricey, Caolan says it’s still better value to shop at an auction for a collector’s piece than spend money on a lesser-quality item from a mid-market furniture store.

“Our most popular pieces are mid-century sofas and daybeds. Clients know these will retain value in the years ahead, so all in all, it’s a good investment.”

Other popular items at Webb’s decorative arts auctions include mid-century lamps and coloured glass objects from the 1960s and 70s, along with classic New Zealand blue and white ceramics.

“When you shop vintage, you know you’re going to have something different from your friends,” he adds.

When it comes to objects with history, Rukaiya Daud an interior stylist and business owner of online store Fourth Street, is passionate about chasing them down. A recent trip to the Paris flea markets, saw her bring back bags filled with 1930s onyx and alabaster bookends.

“It was the hottest day of the year and I had this bag full of heavy bookends, but I just had to have them.”

A self-confessed treasure hunter, Rukaiya regularly sources one-off objects on her travels, anything that tickles her fancy and has a story.

She encourages people to fill their home slowly with objects they love, rather than feeling like they have to fill it up immediately, to avoid that staged look.

“I always discourage people from buying anything with the intention of replacing it in a few years. We have to consider the earth when spending. Could you support a local maker, or have you seen an antique that can be given a buff, shine or reupholster?? You’ll be surprised at what things may look like after a little bit of care.”

Which brings me back to that Eames chair. I discovered it was a reproduction, so when we moved to the other side of town, we gave it to a single friend in the hope of recycling the romance that was spawned in that good-old, fake, chair.

A new coffee table book, The Alchemy of Things, goes inside the eclectically colourful homes of Australian and European curator...