When architect Henri Sayes designed a house for himself and his wife, Nicole Stock, to live in, he wanted to challenge the concept of the traditional suburban home. “It’s a house for young people who really like each other,” quips Henri of the stylish Onehunga abode the couple have shared for two years. “Everything hinges off the main dining room space so you can’t escape each other.”

The house may be modest in size at just 80sq m but it has made a big impact on the landscape, not only standing out in a neighbourhood of bungalows but recently featuring in American magazine Dwell, which celebrates the best in modern architecture and design.

Distinguished by its sharply asymmetrical outline, the building has a cutaway in the cedar cladding that reflects the angular space within. Outside, the lawn is contoured, rising to an amphitheatre shape, a creative alternative to the white picket fence. With no driveway, garage or media room, this is not your typical family home.

“We didn’t have much money, but we had a lot of time, which I spent distilling and refining the design to its most simple, efficient, logical and beautiful end point,” says Henri. “It was about volume and light, spacial contrasts; good space rather than lots of space.”

Henri tackled the project at nights and on weekends, away from his day job at Auckland’s Malcolm Walker Architects, where he’s worked for nearly five years.

Design-wise, Henri is inspired by “people who do things their own way, specifically Steven Holl, Alvar Aalto and Le Corbusier. They’re all great architects with an interesting point of view. None of them are interested in aesthetics, they’re more about challenging the status quo.”

1. Books (see above)
We bought four bays of Lundia static shelving, thinking it would be far more than we’d need, but our ever-expanding collection of books has proved otherwise. Books are such a great reminder of how smart and interesting humans are. They also make the best wallpaper. 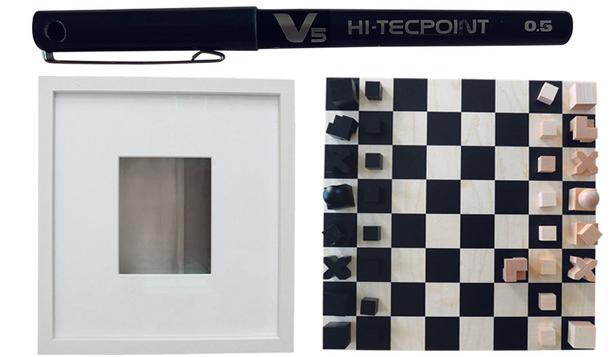 2. Pilot Hi-tecpoint V5 0.5 pen
This is my favourite pen and with a ream of translucent detail paper, it’s the best and quickest way I know to work through an architectural idea. Computers have their place, but sketching is essential to first get the basics right.

4. Laurence Aberhart — Last Light [Ship at sea], New Plymouth, Taranaki, 2010
For our first wedding anniversary we took a road trip to Whanganui, ending up at Paul McNamara’s photography gallery. We spent most of a morning sifting through the gallery’s Laurence Aberhart works, but we kept coming back to this one, which has a tiny bright speck of a ship on the otherwise grey horizon.

3. Chess set
Designed by Josef Hartwig in 1923, these Bauhaus chessmen are, to me, a perfect example of form and function.

5. Sennheiser HD 650 headphones + valve amplifier
Without meaning to, I seem to be tumbling into an audiophile black hole ever since getting this amplifier designed and built by my Brooklyn-based brother, Oliver Sayes, to partner with these Sennheiser headphones. Together they make music so much more everything.