The house’s long, narrow, steep site dictated its design and led to its nickname The Skinny House. Photo / Sam Hartnett Many walkers stop outside Mike and Prue Breckon’s Waiheke home, not to admire the house, but the view across the sea to the outer islands of the Hauraki Gulf.

You must look closer to realise that there is even a house on the property, as all you can see from the road is the side of the garage down a steep driveway.

This has been done intentionally — the Breckons did not want the garage up on the road because they didn’t want it compromising the view. “So many houses block views from the street, and we liked that ours wouldn’t.”

The Breckons’ neighbours also came into consideration. “We have been in a situation where we had a view heavily compromised, and we swore we would never do that to anybody. One of our neighbours was particularly worried about what we were doing here, and Mike was out there with six-metre poles trying to get sight lines to ensure we weren’t affecting their view, and we haven’t, in fact we may have even enhanced it,” says Prue. 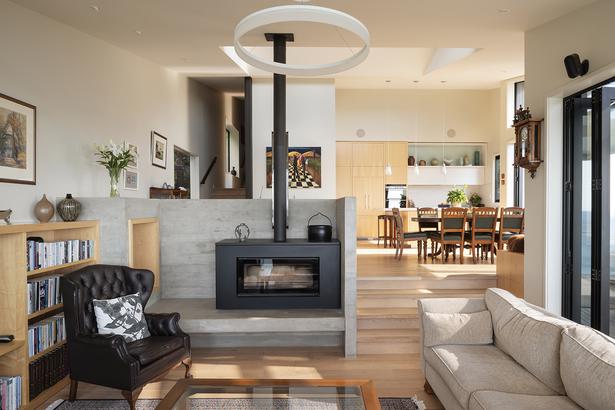 Site does dictate design, and it is particularly so for this long (200m), narrow (13m) piece of land that sat empty for years and had become a bit of a rubbish tip. Three big truckloads of rubbish were removed before they could start groundwork for the home that has become known as The Skinny House.

Architect Jane Aimer, director of Scarlet Architects, says she thinks it sat for so long because no one could work out how to build within the height-to-boundary parameters. The Breckons showed Jane the section to ensure she could do something with it before they bought it.

“It was all about that view,” says Jane. “I knew the house had to tumble down the sloping site and initially designed a series of mini connected buildings, but it was too complicated. I wanted a simple form set down into the trees, so it became a series of semi-buried platforms with one long roof.”

It’s this swooping roof of dark recessive Colorsteel following the contour of the land that enables the house to disappear from the road, broken only by three pop-up clerestory windows.

Jane says, “The design is like a sawn-in-half villa. You come in at the top into a long hall with rooms off the left-hand side and nothing on the right. The pop-ups bring northerly sun into rooms that are further up towards the south — just like a villa that has rooms with only one window; if they’re not facing north you don’t get any sun.” 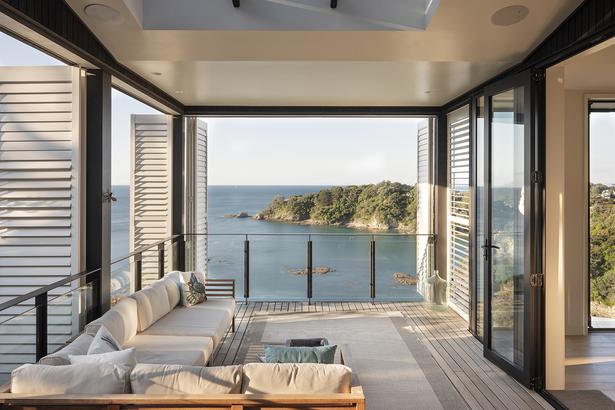 A shuttered loggia gets the last of the sun and provides protection from the elements. Photo / Sam Hartnett

Shafts of light from these windows also lighten the stairwell. The garage is all you see as you come down the driveway. Stairs take you down the side to the front door which opens to a view down the length of the house to the sea below, creating a very “wow!” entrance.

You peel off the hall to the office on the top level, down a gentle set of steps to the spare bedroom and bathroom, down to the utility and powder rooms and down further to the dining, kitchen and then living area. To the side of this area, a full flight of stairs takes you down to the master bedroom. This is the only point of the house that is two storeys high.

It works beautifully, the rooms sitting off landings as you flow down the stairs focusing on the airy living space at the end. Jane worked hard to ensure it didn’t feel like you were going down into a tunnel that never ends.

“The ceiling in the kitchen/dining area is 4.2m high, so it feels very lofty, and when you get to the last little bit of the living room, we have stopped the endless mono pitch and straightened it out, or kicked it back, so you don’t see endless ceiling going down and down. It’s subtle but intentional and opens up the view.”

The open-plan living area is all about that view, with glass bifolds completely opening the north-western face of the sitting room — a glass balustrade offers protection and makes you feel like you are out on a veranda rather than in a room. 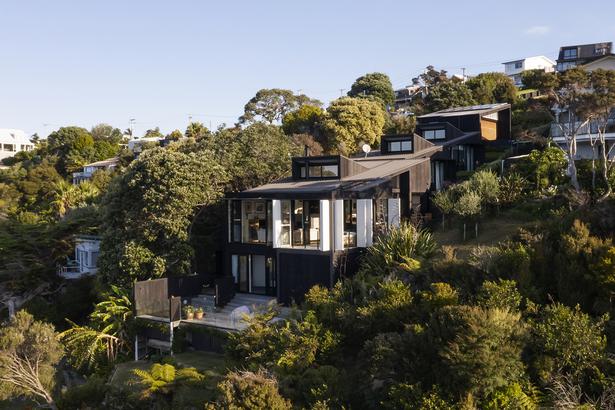 Each level of the home opens up to its own courtyard. Photo / Sam Hartnett

“We can see the Coromandel and out to Great Barrier if the weather is clear. We look down into Sandy Bay where there is plenty of activity with little boats coming and going, and we’ve had the real treat of dolphins in the bay. We can see it all from here and that’s what this house is about,” say the proud owners.

A shuttered loggia gets the last of the western sun and provides an outdoor space that can be closed to the elements and provide privacy when required. It’s a concept that Jane’s company, Scarlet Architects, uses a lot. “Maybe it’s global warming, but we need a lot more shelter these days from the rain and heat, and bare decks don’t provide that,” she says. “The loggia design gives that indoor/outdoor flexibility.”

Because of the way the building digs into the land, each level opens to its own courtyard and connection to the outdoors, which is unusual for such a steep site. The Breckons have done a lot of planting to make these areas lush and assist the regenerating bush, which makes up the bottom third of the section. Paths through the bush lead down to a little rocky cove where Mike catches the odd snapper.

READ: This Clever Petone Home Is A Marvel In Small-Space Living

A beautiful pohutukawa sits on the south-eastern side of the house and a glass ceiling and window are perfectly placed to look up into the canopy and through the branches out to sea as you descend to the master bedroom. “These are the special things that even after four years you don’t tire of,” the couple say. “We love living here. It’s a great design, Jane’s a very clever woman.”

Prue, who wanted the home’s interior to reflect the surrounding bush, sea and shoreline, also loves her floor, which is a band-sawn European Oak in planks of three different widths. “It’s exactly the same colour as the sand in Sandy Bay, which is gorgeous.”

The couple’s existing furniture, some reflecting their time living in Sri Lanka and Indonesia, fits perfectly. Jane was aware that they didn’t intend to buy new and has designed walls and alcoves to fit treasured pieces. 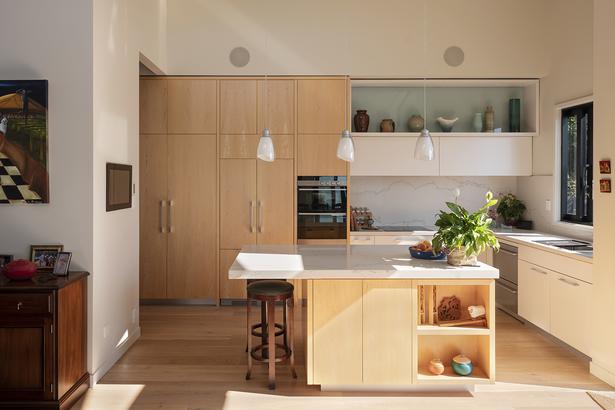 The lofty ceiling in the kitchen and dining area is 4.2m high. Photo / Sam Hartnett

Masses of storage were an unexpected bonus. Prue says she has never had so much, and it is very welcome in this downsizing situation. The stud gives lots of storage in high cupboards.

There’s under-stair storage off the master wardrobe, floor-to-ceiling cupboards in the laundry and bookshelves have been built in down the stairs and in the living room. Storage “rooms” have been created in space beneath the garage and loggia for bulky items, outdoor equipment and garden tools.

Mike, an electrical engineer, has automated the home. From a touch screen in the kitchen you can control most things — lights, sound system, garage door. They also have solar generation from panels on the garage roof and a Tesla power bank.

“It doesn’t supply the whole house, but it’s enough to reduce the power bill, and if there is a blackout we don’t have to resort to candles. Basic lighting, the fridge and the water pump still work.”

Prue is also relieved to have bore water that allows the filling of tanks during dry spells. “Two-minute showers standing in a bucket was not what we wanted for our retirement!”

Fair enough too. The Skinny House is the Breckons’ permanent home and these elements complete what Jane has designed as a year-round haven that’s a mix between a beach place and a home — not too suburban, not too bachy.

This story was originally published in Viva Magazine – Volume Six.