Appliances are integrated into a continuous wood finish at this Cheshire Architects-designed kitchen in Freemans Bay. Photo / Simon Devitt As UberEats culture grows, cooking at home decreases and living spaces become more integrated, the traditional kitchen is disappearing before our eyes

Seamless integration. It’s a phrase that seems to have come straight out of the digital world but it’s one you’ll hear being used by kitchen designers and architects just as often these days. It’s not even a reference to digital technology but rather to the increasing practice of completely concealing kitchen appliances — like fridges, dishwashers and microwaves — within cabinetry.

This is a design approach that requires more than just building cupboards to hide away the appliances. These days, cabinetry surfaces are fitted directly to appliances designed for this exact purpose, so when you open the cupboard door or drawer, you’re simultaneously opening the fridge or Dishdrawer. It can be quite a feat of engineering and custom design to get this working smoothly, but the result is a kitchen that looks less like a food preparation space and more like an extended part of the living area.

Mark Elmore, head of design for Fisher & Paykel, says the brand has embraced the direction of appliances receding into the background instead of standing out.

“Increasingly, it’s less about the kitchen appliances being the heroes of the kitchen and more about how to they fit with how people want to live.”

What that means is that kitchen appliances need to work harder than ever, without claiming quite as much glory. Pre-1970s, kitchens were typically completely separate spaces in a home, with the food prep and cooking smells kept away from the eyes and noses of dinner guests.

But as open-plan living and apartment living — where the kitchen became part of the living room through the need for efficient use of space — popularised, the kitchen’s visibility and style increased. Traditional whiteware was spruced up with stainless steel and coloured exteriors, while cooktops and ovens took on a more “professional” look as the “entertainer’s kitchen”, with conspicuous gas hobs and a vast island bench, became a key symbol of bourgeois success.

READ: 13 Food Trends To Eat & Drink Your Way Through

Now, although the open plan aspect of the kitchen/living space has remained, kitchens have become less obvious, says Mark. “Ten years ago, the kitchen still felt like a kitchen. There was different cabinetry, you saw the appliances. Increasingly, people have the desire to make it very homogenous, so the cabinetry and design that you see in the living spaces translates right through into the kitchen so it feels like one big living room, which happens to be a place where you prepare and share food as well.”

An increase in the popularity of sculleries or butler’s pantries in high-end homes, where the messy work of food prep goes on in a space tucked away behind the “real” kitchen, has also contributed to the disappearance of the traditional kitchen. 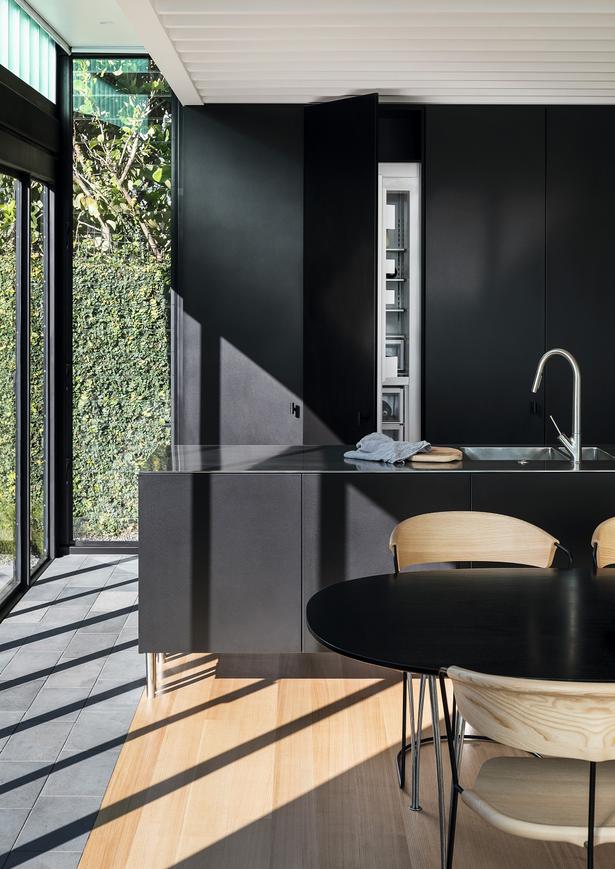 If appliances are increasingly being hidden away behind cabinetry, doesn’t that make it harder for brands to get their names seen? “You can always open the doors,” Mark laughs.

Kitchen appliances are one of two key areas of business for Fisher & Paykel (alongside laundry appliances) so their 400-member design team spends a lot of time thinking about and studying the changing nature of the kitchen and how that affects the design of products, he says. “We’re in a constant dialogue with kitchen designers and architects who are specifying these products every day.”

New Zealand has traditionally had a very informal lifestyle compared to a lot of other countries and cultures, says Mark. This is partly defined by a fondness for indoor-outdoor flow inspired by our landscape and climate; partly by being less bound by traditions around the type of food we eat and the places we eat it in.

We’re also responsive to new trends and technologies and although in the past we had to wait a long time for technology, materials and finishes that launched in the design strongholds of Italy or Germany to make their way to this side of the world, increasingly globalisation now allows us to pick up on international trends rapidly.

“It’s hard to generalise but especially people who are in a younger generation, living in central city apartments, eat out a lot now. So on one hand they want to have quick meals, convenience and a light touch but when they do want to cook, they really want to go deep. Historically, knowledge about cooking was passed down from generation to generation. That doesn’t necessarily happen as much now.

“So you’ve got people who come to the kitchen and like the idea of cooking, it’s like a hobby or a creative process for them. They read blogs and magazines and watch cooking shows. So they want to bring that into the kitchen but they also need our products to be really simple when they have little knowledge. They don’t want to have to press seven buttons to turn an oven on but they want the ability to add levels of sophistication.” A hidden scullery and the use of a china cabinet as storage helps blend this kitchen by Annika Rowson into the living space. Photo / Gina Fabish @ The Virtue

To cater to this dichotomy between reheating takeaways during the week and preparing a dinner party for friends on the weekend, Mark says the technology for cooking programmes within the oven has taken big steps forward.

“A great example would be the roast function on our ovens. It’s fully electronic. It has elements and fans and different cooking areas that allow you to sear the outside of the roast and seal in the flavours. But you want to balance the right temperature on the inside without overcooking the outside. So we start it off hot, to sear it, then back it off so the inside can cook. We have vents that allow the steam to be released or retained depending on the stage of the cooking process. “You can just press a button and walk away.”

Despite people no longer always having the in-depth cooking knowledge they used to, increasingly they want the appliances that are on display in their kitchen to look as though they belong to a professional chef, says Mark. That means weighty, industrial-look ovens and cooktops with multiple burners.

“We offer a full range of cooktops, electric, gas and induction, including the ability to mix and match. We might sell a single gas burner so you can use a wok to cook a stir-fry, alongside a three, four, five-burner induction surface.”

Induction cooking, where an electro-magnetic current is “induced” in a pot on the cooktop, is becoming increasingly popular. “When you boil it down — no pun intended, sorry — cooking is about getting a pot hot and induction is incredibly good at that,” says Mark. “You have incredible control with it, and the power goes to the size of the pan, so you’re not wasting any energy. Generally the people who try induction stay there.”

In the end, Mark says, his job is not to try to shape kitchen trends, it’s to respond to them. “We’re not kitchen designers, we’re appliance designers. We’ve set our products up to offer lots of choice around look, so on one hand we’re helping make them disappear, but on the other we’re reflecting the personal looks people want to showcase in the kitchen.”

The Auckland Bee-Keepers Bringing Hives To A Rooftop Near You

Urban bee-keeping is booming. Melinda Williams meets a couple who are putting beehives on to buildings and in backyards around ...