9 Of The Most Wearable Runway Beauty Looks Of 2019

Fresh from New York, Milan, Paris and London fashion weeks, we pick the best beauty looks for all ages

The autumn/winter 2019 designer shows were liberally sprinkled in glitter, neon and exaggerated lashes and liner, plus more practical ways to easily update your makeup, smart-age your hair and get glowing skin. Here’s to the enduring appeal of keeping it classic — but worn with a modern twist.

1. FIERCE FACES
The talk of Paris Fashion Week was the all-ages African-American model lineup, closed by disco queen Grace Jones, at the 1970s-inspired Tommy Hilfiger x Zendaya show. The 70-year-old singer/songwriter with signature chiselled haircut and burnished makeup, rocked a gold bodysuit and a pin-striped metallic blazer. Why not, she wore it well. A timely reminder that celebrating individual style isn’t only ageless, it’s life affirming. 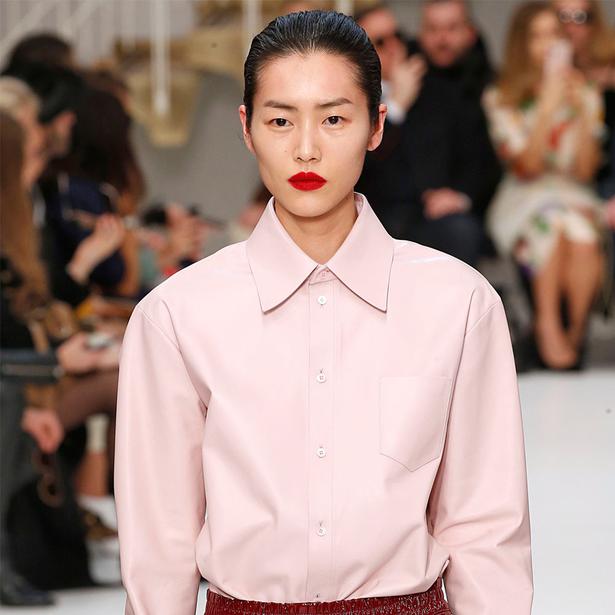 2. MATTE FACTOR
The most elegant way to wear a deep matte lip? With almost nothing else obvious on the face, as seen at the Tods show in Milan and repeated across the fashion capitals. Fresh-looking skin is the accompaniment that best updates red lipstick while ensuring matte doesn’t look flat. Pair with simple eye makeup and slightly structured brows to banish any heavy-handed hangover recalling the days of power dressing. For lightly perfected skin, mix equal parts moisturiser with your foundation or switch to a lighter face base, then go easy on any powdering. Aim for the minimum coverage and shine control you need. 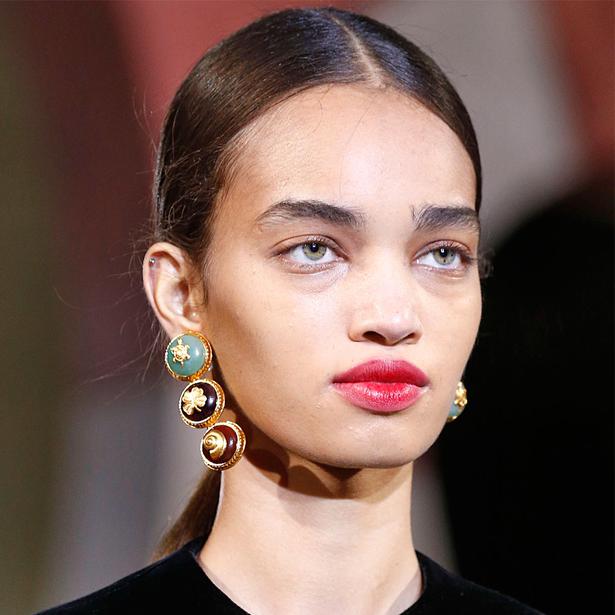 3. JUST A SMUDGE
Low-maintenance makeup is such a boon — after all, who wants to touch-up constantly? Deliberately diffused colour stains are the way to go, as seen at Oscar de la Renta in New York. Because this look avoids a sharp lip outline, you won’t get messy smudged edges; instead your lips will look delightfully worn in. Makeup artist Tom Pecheux applied a garnet-coloured lipstick to the centre of lips, then blended it out towards the edges with a cotton bud and fingers. Low-maintenance, long-wearing colour sorted. Hair was equally relaxed with ponytails and pretty hair accessories. Tick, tick. 4. FEELING PEACHY
Terracotta cheeks are an autumnally appropriate hue. Swap out your pink blush for a warmer burnt orange or peach-based tone to tie in with winter fashions, where brown and berry shades abound. To really blend in, adopt the currently popular monochromatic makeup approach. For the Cushnie show in New York, makeup artist Grace Lee used just one cream-based product, in Maybelline’s Made for All Lipstick in Spice For Me (or a mauve shade of the lipstick on other models), to create a wash of colour across eyes, lips and cheeks. Easy and economical. Later, at Chloe in Paris, Pat McGrath made a classy monochromatic move with Bordeaux red on models’ lips and a touch of the hazy crimson shade at the outer eye. 5. BE A GLOW GETTER
This season Victoria Beckham traded her runway staple of boyish brows, or statement lips to concentrate on beautiful, ultra-glowy skin. The minimalist look recalls her own beauty and fashion evolution. Presumably her soon-to-launch cosmetics company (announced in the wake of several sell-out collaborations with Estee Lauder) will include a bit more colour, alongside her personal standbys of nude lipstick and bronzer. For her London show, Beckham called on leading UK facialist Nicola Joss to ensure the skin of all 30 of her models was thoroughly hydrated, using cult The Cream by Augustinus Bader. Facials before work may be out of the question for most of us, but pumping up the moisture content of skin before applying your makeup should be a daily habit. This gives a healthier looking glow than just layering on illuminator. 6. MESSY BUNS
Move over Meghan, casual chic can be achieved without a stylist at hand. Try a DIY version of this easy to recreate roughed up ‘do at Jil Sander in Milan. But fair’s fair, the Duchess of Sussex does deserve global credit for unwinding occasion hair from its tight coils — just not sure the rest of the royals would embrace this runway-inspired deconstruction. The trick is to start by loosely scooping hair into a messy bun, the messier the better. Then massage the edges, releasing baby curls around the front and fronds from the secured section at the back. Pair with big earrings, for added individual character. 7. A TRIBUTE TO KARL
Three days after Karl Lagerfeld died, the show at Fendi (where he ruled as creative director for more than five decades) was sombre, but also a personal tribute. His longstanding collaborator, hairstylist Sam McKnight riffed off the designer’s own look, in pulling the models’ hair into sleek ponytails at the nape of the neck. Always a tidy choice. As to the pin-curled fronts — a reference to the decade in which Lagerfeld was born — these aren’t so easily rustled up at home, but do push popular structured waves into dressier occasion territory. As with matte red lips, the latex-looking vinyl finish used in Milan was impactful because other makeup was kept clean. Makeup artist Peter Philips applied Dior’s Brilliant Lip Shine #999, or top any high-pigment red lip paint or lipstick with clear gloss. 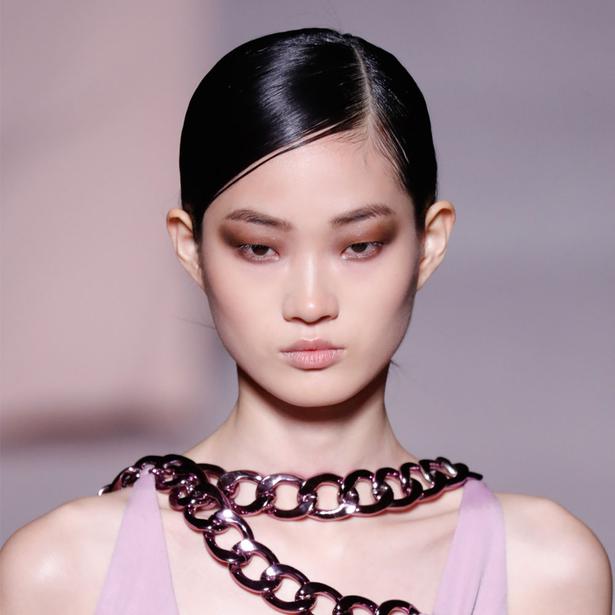 9. SKY-HIGH HAIRSTYLES
If you thought Ab Fab’s Patsy Stone was on to a good thing with her sky-high beehive, you’re in good company. This retro hairstyle got fashion’s seal of approval for 2019, at Erdem’s London show, among others. Try a toned-down back-comb as a way to cheat volume for thinner, flatter hair. Backstage lead stylist Anthony Turner prepped the models’ wet hair with L’Oreal’s Professionnel Full Volume Mousse. Once dry, he split the hair into a top and bottom half. The bottom was pulled into a high ponytail, the top back-combed for height, then blended into the pony and teased back into a messy bun. Done.

How To Wear Holographic Makeup From Day To Night

Metallic makeup has morphed into holographic finishes in time to brighten up party season. Go on, take the 3-D look for a twirl

We challenge you to try this year's top unisex beauty trends, as spotted at Paris Fashion Week Men's and Berlin Fashion Week 2019