The brand that is Karen Walker is something the woman who is Karen Walker talks about fluently. It would be easy to say that New Zealand’s highest profile international designer is relentlessly on message, but uncannily focused is fairer.

She can be candid, but the Queen of Cool doesn’t trade in interview tittle-tattle. Occasionally she throws in an anecdote, but it’s always illustrative. She sells Karen Walker, the multimillion-dollar fashion empire she has become. She sells clothes, sunglasses, jewellery, shoes, bags — and now perfume. The trajectory of designer desire. “We felt we had an idea, a point of view, that was different from what was already out there.”

She’s talking about the brand(ed) new fragrances — a boldly bottled trio called A, B and C — but the prescription applies across the board.

“The concept is about possibilities and optimism and energy and inspiration, but not about whether some guy will look at you.” So no seductive shots of models lolling about, reeking of sex. Same went for the eyewear, photographed on senior style stars, rescue dogs and African villagers, and the jewellery strung on vintage china.

If there is an archetypal Karen Walker girl — other than the classically dressed-with-a-twist brand founder — it is the Runaway girl. This recurring brand emblem, of a jaunty young thing with a swag over her shoulder, speaks of an independent spirit. Self-expression on sale.

A common thread across the brand’s output, original fashion line aside, is that the products are made in partnerships. For fragrance Walker was drawn to source, going to Grasse, the traditional home of French perfumery and teaming up with Charabot, the oldest maker still in existence there, dating back to 1799.

She loved the old town, consulting the noses and being a “bit of a geek” about technical aspects, such as watching robots mix the final juice. “They’ve got such history, but they’re so modern ... you wouldn’t still be around if you weren’t technologically advanced,” she says.

“We’re in the business of ideas, not manufacturing, so that’s how the business is continuing to grow. We’re not going to be making it in the bathtub.” 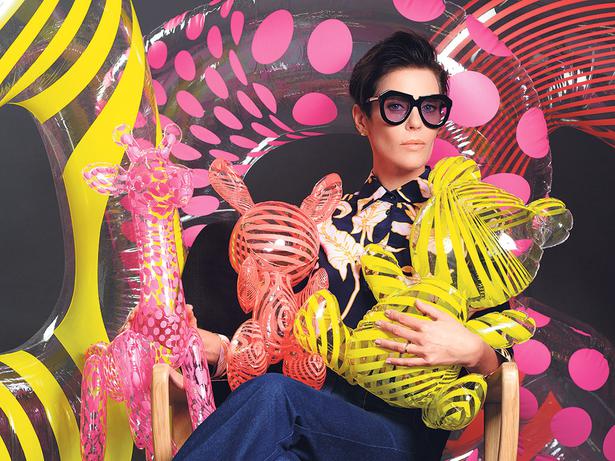 She refers in the royal “we” to the brand, using the collective pronoun to encompass her life and business partner, husband and company creative director, Mikhail Gherman. Tall poppies who stand together. They’ve been a tight team for nearly 30 years, having met when she was a 17-year-old at fashion school and he a 21-year-old fine arts graduate. Soon they set up shop.

A few months ago, when Mikhail turned 50, they twirled on the dance floor, she wafting of her favourite white flowers. The occasion did double duty as a testing ground for a prototype of fragrance C.

It is typical of Walker to make even her down-time work. “I try to get half an hour alone each day. I lock myself in my yoga room at home and put on a history podcast and I do some shoulder stands; restorative yoga to unwind from the day, it’s mind calming. “What I’m into at the moment is the BBC’s Witness series.”

When her 7-year-old daughter, Valentina, came across her mother in an unfamiliar position in front of the television a while back she asked what she was up to. “I love watching the Oscars, but on the DVR, to fast forward through the boring bits.”

Work does not bore Walker. She says it energises her. “Seeing good work, that’s what motivates me. You feel it ... and then hopefully see people wearing it in the street.” Or smell them.

Walker says in the nearly two years she spent secretly testing versions of the fragrances she was sometimes stopped and asked what she was wearing, forcing the unlikely, for her, answer of: “I can’t remember.”

She won’t admit to a favourite, saying she matches them to her moods. “I still get such joy from them. It sounds a bit over the top, but I love them all.”

Doing three rather than one was natural, she says, coming from ready-to-wear fashion “where ideas are presented as a body of work”.

The idea behind the alphabet trio and its playful campaign imagery, directed by Gherman, is of building blocks and possibilities. “But we’re not going right through to Z!” Several more self-contained fragrances are already in development, however, with the sixth maybe for men.

READ: Everything You Need to Know About Karen Walker Fragrance

Walker hopes the original trio will be collected by “our girl” in the same way “they’re wearing four pieces of jewellery at the same time” and that those people who find the glasses “don’t tend to just have one pair”.

The eyewear business expects retail sales of $35 million this year, she says. Queries about the perfume forecast are met with “confidential”, but pressed for its long-term place in the business, she elaborates, “I don’t see any reason it couldn’t match eyewear.”

Walker and Gherman are partners in the company that has brought fast-fashion giant Topshop to New Zealand. They have ongoing licensing arrangements for the jewellery and sunglasses and a homeware and diffusion fashion range deal with Australian department store giant Myer, plus paint with Resene. Add in limited edition collaborations with international retail players including Uniqlo and eyewear exclusives with upmarket stores such as Barneys and that’s a lot of balls in the air.

She especially keeps her eye on the prized catch called brand vision. “My test is always for any item you should be able to cover the logo and still know where it is from and I think that’s when you know you’ve got a brand not a label.”

The voice of the brand has been there right from day one, she says, but it has become broader in what it creates and, “perhaps, a little more polished”.

“We don’t have to overthink creative decisions, It doesn’t even get off the sketch pad, or on to the sketch pad unless it feels right. We know intrinsically that’s our job. We’ve been doing it 25 years, so if that’s all I’ve got to do,” she chortles, “then I’d better make sure I do that right.”

Big projects are spaced out, interspersed with the smaller “collabs” the fashion market laps up and a nimble niche brand can supply.

“That’s been a really big move over the last five years. It’s about discovery products.” Being global niche adds up to “a pretty good business”.

The different arms of the business aren’t regarded as brand extensions, but integral to the whole. “I think of it as all fashion and there are lots of different ways to communicate that. I don’t think of anything non-ready-to-wear as offshoots, hinging off our fashion shows in New York. It’s not like a planet and satellites. Everything is equally important and equally relevant and treated with the same amount of love.

“Fragrance is part of the same story.” The partner for that venture is a former L’Oreal luxury division executive Miranda Waple, who helpfully speaks fluent French, something Walker admits she could improve on.

When asked about any other weaknesses, she says, “Oh heaps of stuff. I’m hopeless at tennis,” but business fallibilities aren’t volunteered. Her strengths are in combining the creative and business control and planning.

“That’s just how my brain works. Nothing in between interests me. I want to be in the design room, what’s possible, or making it happen.”

The scale of the business allows her to now say, “I don’t have anything in my job description that I’m not good at.”

It wasn’t ever thus. She grappled with everything in the early days, but now more is at stake than a $100 start-up, underpinned, however, with a bigger team and the self-assurance of experience. “If you’ve got good ideas and you’re engaged and in tune and have your eyes open all the time — and you’re still excited by it — then you still have something to say.”

In combination with the live-wire Gherman, who has long maintained a parallel career in the top echelons of creative advertising, the opposites- attract couple would appear an unbeatable combination. Where will it end?

“We’re not going to do a Pierre Cardin and have our name on 20,000 different things,” says Walker. “It’s got to be something I love, that I would want in my life.”

Having flagship stores overseas one day is one of those things, as is staying based in New Zealand. The need to take time out with family and friends is also high on the priority list, but like everything it is timetabled. Holidays are booked every three months: summer around the pool at home in Ponsonby, with short breaks on Waiheke; winter it’s likely to be Fiji to inhale those tropical flowers. Work devices allowed, but only briefly, at either end of the day from hammock time.

Is she a control freak? Walker considers and says evenly, “No, I don’t think I’m a control freak, but to be running a brand of this scale you have to know what’s a yes and what’s a no.” She makes it all sound as easy as ABC.

• To celebrate the launch of her new fragrance, Karen Walker will be at Smith & Caughey’s Queen St today from 12-2.45pm.

• The Karen Walker eau de parfum trio will be on sale from today, with a 50ml bottle costing $130 and 100ml for $175. Stockists include the designer’s stores, Smith & Caughey’s in Auckland and selected boutiques throughout the rest of the country.