Of all the fables told by the ancient Greek storyteller Aesop, the one that best matches the journey of the eponymously named Australian skincare brand, is the slow but steady wins the race tale of the tortoise and the hare. In a world of pop-up-and-burn-out beauty brands that leverage celebrity endorsements and buzz ingredients in the hope of viral success, Aesop is a restrained powerhouse: making its way calmly, consistently, measured.

Aesop launched its first apothecary-styled products in Melbourne in 1987, began selling in New Zealand in 2003, and opened its first store here in Auckland in 2016. This month, it opened its third, a Wellington flagship.

Denise Neri, retail architectural manager for the company won’t be drawn on whether a fourth is in the wind. “It’s quite possible,” she concedes. “But we like to concentrate on each project and its neighbourhood as we go. Getting to know the community is an organic process and takes a bit of time. It’s also an enjoyable process — becoming familiar with our neighbours and customers and the cultural characters of the area.”

Like the other 100+ Aesop stores around the world, the Wellington store follows a formula that’s almost unique in the world of international retail chains — a blend of Aesop’s rigorously constructed brand identity and display guidelines, and the individual aesthetic of a local architect or designer, usually one who has a particular connection to the location of the store.

In the case of the Wellington store, that’s Rufus Knight, founder of Knight Associates. Rufus is unarguably New Zealand’s hottest young property on the spatial design scene, having created fit-outs for niche luxe stores such as Lonely, Curio Noir, Kowtow, Simon James and Twentyseven Names, as well as contributing to New Zealand’s 2016 Venice Biennale installation. He knows the Featherston St area well, having worked “just up the road” in retail for many years while studying spatial design at Victoria University.

As Denise Neri discovered, he’d also crossed paths with Aesop before she came across his work while researching potential designers for the Wellington store. “We worked with Vincent Van Duysen on our Hamburg store, and I learned that Rufus had worked in Vincent’s office in Belgium and had quite a lot to do with the project, even though he hadn’t worked directly on the design team. So he was familiar with our process.” 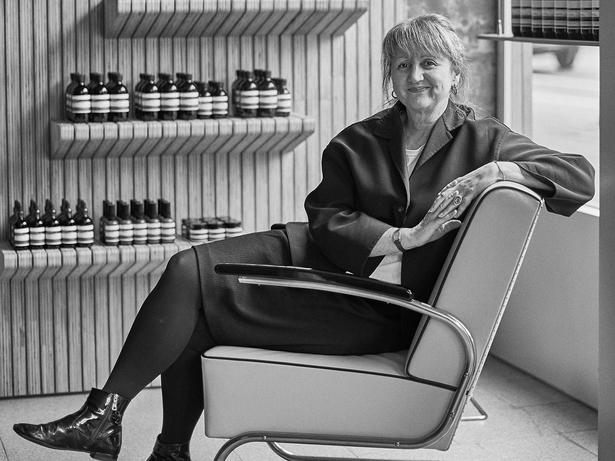 That process started with research into the history of the building that would house the new store: the 1932 Change Building (formerly the Brandon’s Building). “The building was an amalgamation of several architectural styles, including Art Deco, the ‘Chicago’ style and New York modernism,” says Rufus. “The local architects at the time were very outward-looking, so I wanted the design to reflect that.”

Over the years, the building has housed a succession of law and commerce practices, a history referenced in the Aesop space’s use of rich materials: dark timber shelving, a brass-toppd washstand and bench, and hardwood parquet flooring with a basketweave pattern that was drawn from the era-contemporary customs buildings on the harbourfront.

Soft plastered walls with gentle curved edges recall the Art Deco style of the building, as does a vintage Art Deco tube floor lamp with brass trim, and rounded club chairs upholstered in velvet, in the pale green of the underside of a leaf.

Two textile-imprinted vases by German glass artist Fabio Vogel add an element of delicate irregularity to the restrained interior, while the product wall that extends in a long curve around the entire rear of the store visually represents the history of the building as a “transactional space”, says Rufus.

Like all Aesop stores, this one has been built to last — part of the brand’s unusually high level of investment in bricks-and-mortar retailing.

“The whole Aesop experience is very physical and sensory, and that’s best when we can be there with the customer and they can try the product on their skin, smell it and get to know it,” says Denise Neri. “You come to Aesop for that experience — for a sense of occasion and theatre, because it’s somewhere enjoyable to go.” Know your own best element — perhaps there’s more than one Aesopian moral to fit this brand.

Luscious Oils Your Skin Will Love

Janetta Mackay plugs into oils that are best for your skin, and her findings may surprise you

Aesop champions a distinctive retail style and is growing fast across the globe. On the eve of its first New Zealand store open...