The Beauty Brand Unlocking The Power Of Native Australian Botanicals

The overlap between food and beauty ingredients is familiar but taken into intriguing new territory across the Tasman, finds Janetta Mackay

High above the broad sweep of Australia’s Byron Bay is a cornucopia of cosmetic possibilities.

Away from the resort town in the rolling northern New South Wales hinterland, pockets of bush thicken and the air cools. Up a winding road, we come to a small sign that reads Possum Creek Bush Foods.  Down a narrow track there’s an old wooden farmhouse, a clearing of hillside beyond planted in a higgledy-piggledy collection of fruiting shrubs and trees.

It’s gumboot territory and appearances are deceptive — for this rough and ready scene is actually a carefully plotted cultivation centre for some of Australia’s most interesting indigenous ingredients.

Biologi skincare founder Ross Macdougald is a big fan of farm owner Sheryl Rennie and her botanical knowledge. Combined with his own background as a cosmetic chemist and plant-extract pioneer, there are rich new pickings here from what was once dismissed as “bush tucker”.

He’s not alone in seeking out Sheryl. Top chefs — including New Zealander Ben Shewry from award-winning Melbourne restaurant Attica, who visited a few months back — are among those seeking advice at the orchard.

Over 20 years of hard yakka, Sheryl has pruned and propagated to find what best flourishes. Now, she provides advice to government officials and contracts other growers to help meet the demand from restaurants, for export and to forward-thinkers such as Ross. He reckons Australia has barely scratched the surface in tapping into its phyto-nutrient resources. 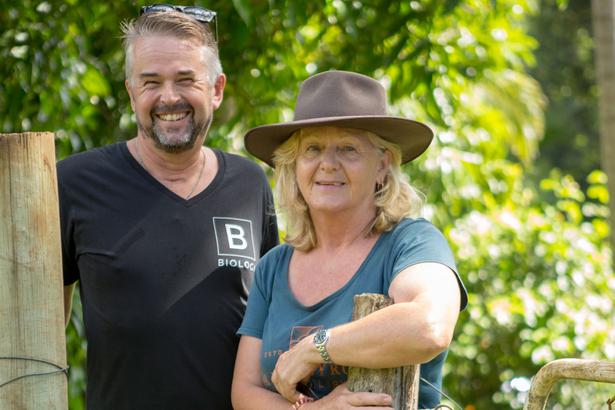 “A massive orange has far less vitamin C than one Kakadu plum,” he says. Biologi already uses extracts of wild-harvested Kakadu plums and Sheryl’s cultivated finger limes and Davidson plums in its serums.

There’s much more to discover about these and other Australian plants, says Ross. In a roundabout way, Hollywood stars and fellow local residents Chris Hemsworth and Matt Damon agree. The two actor mates had dined 10km down the road at the acclaimed Harvest restaurant in the historic village of Newrybar, just the night before Ross.

The drawcard was being first to try the new private dining room — warmly tucked away behind the chimney of Harvest’s own brick bread oven — along with the repeat appeal of a menu of foraged and regionally grown food. The likes of lemon myrtle leaves and quandong (or desert peach) are used to give fresh flavours to locally raised meats and vegetables.

READ: 4 Foodie-Inspired Products To Add To Your Beauty Routine

Sheryl eagerly laps up details of the menu and adds stories of her own. A version of lemon myrtle she grows has a gentle aniseed-like taste, which infuses well with spirits. Her finger limes bring distinctive flavour to the navy strength edition of modern Australian gin distillery Dry Pillars. Peters, the Tip-Top of Australian icecream, has just tried the same fruit as a new flavour.

Sheryl says cooking with the nobbly little native plums and limes is all about balancing their natural bitterness. For the Aboriginals, such raw fruits were vitamin survival packs in harsh terrain. That they’re a treasure trove of antioxidants is what drew Ross to them for cosmetic use.

Ross is in no doubt that New Zealand, like Australia, offers bountiful yet still to be discovered botanical opportunities. But he’s busy enough already because “Australian biodiversity is huge”.

WHAT TO LOOK OUT FOR WITH BOTANICAL BEAUTY BUYS
If you’re using a rosehip oil that looks clear and doesn’t smell, it’s time to ask yourself why. Undiluted, unrefined rosehip oil is naturally an orange colour and it doesn’t come up smelling of roses, instead it has an earthy/woody smell. Some batches may be more golden in tone, because all plant extracts vary depending on growing conditions, but if what you think is pure organic oil is unduly light or smells fragranced it’s been played around with. (If it smells rancid, bin it; it’s been handled or stored badly.)

So says cosmetic chemist Ross Macdougald, who is the largest trade supplier of rosehip seed oil into Australia, importing $1.5 million of the stuff wholesale out of Africa. Ross is also a main supplier of a host of other flower and plant oils, ranging from imported and pricey jasmine and rose to locally extracted Australian indigenous ingredients, such as lemon myrtle oil.

He deals in the priciest white lotus essential oil, at $70,000 a kilogram, through to 1-in-10 parts diluted oils that some clients want. The oils are used in products ranging from expensive skincare and fragrance for personal and home use to everyday body care and aromatherapy products and for pharmaceutical purposes.

What he’s seen over the decades as a formulator for leading skincare companies and then as a supplier turned Ross first into a sceptic and now a disruptor, with his Biologi skincare brand. It’s steadily growing and is a finalist in the Telstra Business Awards. Ross runs Biologi with his New Zealand-born fiancee, Lucy Kuper, a skin technician turned educator. They launched the range here nearly a year ago and live on the coast of northern NSW at Ballina, where Biologi and his other companies have an office.

A large warehouse is based half-an-hour’s drive inland. Ross first moved north from Sydney to work with a tea tree oil plantation and Southern Cross University. In 2000 he founded Phytoverse, to supply natural materials wholesale. Next came Plant Extracts, using his own extraction techniques to provide plant actives that he says are a science-based alternative to synthetic ingredients. “Biologi came about because no-one wanted to use the extracts at 100 per cent,” Ross said.

“Why would you dilute any active ingredients?” he asks. The answer: Marketers liked to say products contained organic and natural ingredients, yet often companies just watered them down to save money. Ross also maintains mixing ingredients isn’t the way to go, and can render them ineffective. Biologi is unique in using single plant extracts (of indigenous Australian fruit, pictured) which it wholly handles from plant to bottle to produce its 100 per cent natural serums. It claims this as a world first.

Biologi is departing a little from its original purist serum-only focus, by introducing its own rosehip oil (pictured) at the end of the month. This is in response to around 10 to 15 per cent of customers wanting a moisturiser added to its trio of serums for face, eye area and body. Rather than send them elsewhere, it helps that through Phytoverse the wider company has its own rosehip imports at hand. Lucy and Ross maintain most people would be fine forgoing a moisturiser if using the right serum, but a pure oil is a good compromise — in lieu of the extra skincare education they would like more people to seek out.

10 Natural Deodorants To Add To Your Bathroom Cabinet

If you're thinking of switching to a natural deodorant, this is what you need to know