With many women self-conscious about their underarms, Dove wants that to change

Have you ever felt self-conscious about taking off your sweater on a suddenly hot day? Not wanted your partner to feel the stubble under your arm? Received a funny look from a stranger when they saw your pit hair? Though common concerns, these perceived failures to live up to the notion of the “perfect” armpit are taking their toll on women.

Long a topic of discussion, beauty standards create unrealistic expectations around people's appearance. The statistics are troubling. 70 per cent of women feel pressure to look a certain way, according to research undertaken by Dove, while 23 per cent report feeling dissatisfied with their appearance. However, thankfully, change is afoot and hard to ignore. The body confidence movement has been gaining traction in recent years, bolstered by conversations on social media, an evolving sense of responsibility from the media, and a more inclusive approach from industry-leading brands like Dove — which has been presenting a diverse vision of beauty in its advertising for decades. It’s a movement that challenges beauty standards by embracing all bodies as beautiful. 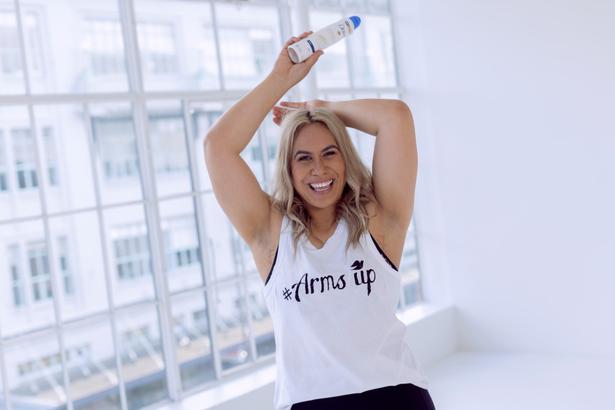 There’s more openness about what beauty is now; people are championing a frank and honest approach to their body, embracing nonconformity. It’s a #nofilter approach to beauty, and it’s helping change attitudes and society’s perceptions about what is attractive. The next area of focus for body confidence? Underarms. A whopping 90 per cent of women in Dove’s study reported feeling bad about their underarms at some point in their lives, most often while exercising, socialising, working or during romantic situations. More than half of women were concerned about odour, sweat, hair and skin tone, while a third of women felt their underarms were unattractive and unhygienic, and should not be shown in public.

Negative perceptions like these can have a considerable effect on how we feel and act. The emotional impacts include feeling self-conscious (like 72 per cent of women surveyed) and embarrassed (68 per cent). These feelings can influence behaviour, with the majority of women reporting that they’ve avoided activities, restricted their movements or worn something to cover their underarms. Inspired by this research, which revealed the dissatisfaction many women felt with their underarms, Dove’s #ArmsUp campaign hopes to change that, and was launched on October 17, Body Positivity Day 2021.

READ: Huriana Manuel-Carpenter Is Teaming Up With Dove To Challenge Beauty Standards

Key to its message is challenging the stereotype of the perfect armpit. Underarms are all different, all unique, and that there’s no such thing as the perfect underarm – they're all beautiful. The campaign also hopes to celebrate individuality, leaving the presentation of this area up to the person. It's responding to the change women say they want to see — with the majority telling the brand that underarms shouldn’t be a point of worry, and should be accurately represented in the media. With Dove’s history of celebrating real beauty, and role providing trusted deodorant (like its gentle antiperspirant Dove Advanced Care) to women around the world, the brand is getting behind underarm positivity.

Through the #ArmsUp campaign, the brand hopes to liberate women from their inhibitions, so they are no longer restricted by how they feel about this area of the body. Liberation through acceptance is something Huriana Manuel-Carpenter knows well, and as the lead ambassador for Dove’s campaign, the former-Black Fern shared her own journey with underarm confidence and body positivity, hoping to inspire other women. “People often say that beauty is in the eye of the beholder, but I think that the most liberating thing is realising that you are the beholder,” says Huriana. “We should embrace diversity, choose our own role models and embrace our uniqueness and natural bodies."

Social media is a key part of Dove’s campaign. These apps play an important role in shaping body confidence, and though social media can have negative impacts — 93 per cent of the women surveyed by Dove felt pressure from social media to look a certain way — its independent, user-generated nature means it's also the forum driving the most change. It’s a platform harnessed by Morgan Penn, a somatic sexologist, to educate and inspire her followers. She’s been on her own armpit hair growing journey recently, and underarm stigma is something she finds heart breaking. “As if we don’t have enough societal pressures on how a body should look, even a cute little spot on our body that hardly sees the light of day can get caught up in such judgement.” Morgan believes Dove’s campaign will help women feel less alone. “I hope it fires people up to challenge societal norms and find the confidence to get their #ArmsUp no matter what's happening under there,” she says. “They are all unique — hair, no hair, spots, bumps, scars, stretch marks, it’s all part of what makes up an individual.”

Jess Quinn champions individuality too. “I believe that no one should be judged for the choices they make around their body, and that goes right down to our underarms,” she says. “There should be no stigma behind someone's choice or natural being.” Visibility is important to her, and a key part of her mission as an accessibility advocate. She thinks this initiative, like all of Dove’s campaigns, will help people see that bodies come in all shapes, sizes and forms. “That's the kind of representation we need more of,” says Jess. “I hope that the #ArmsUp campaign will uplift women to throw their arms up, dance, wear whatever they like, in confidence without worrying what their armpits look like.” 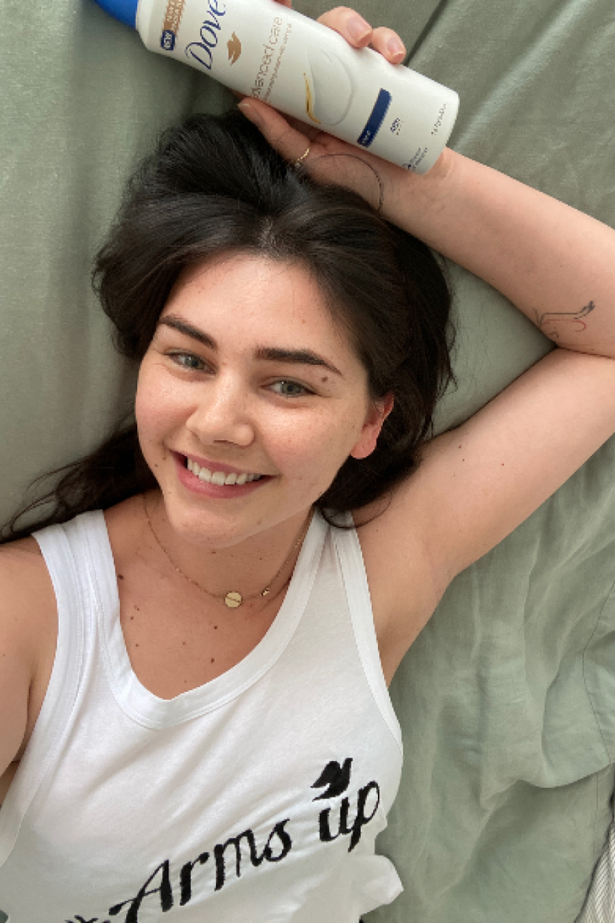 Tia Reweti is raising her arms up for the campaign, and she’s come a long way on her road to underarm confidence. “I used to scrutinise my underarms, not liking how 'dark' they were and how 'weird' they looked even after I would shave them.” This all changed when she realised how much it was inhibiting her life, and how she wasn’t treating herself with kindness. “I’ve realised that loving myself and all the forms in which I choose to present this body to the world is one of my ultimate superpowers,” explains Tia. “Being unapologetically hairy is skuxx, having no hair but having my hyperpigmentation on display is also skuxx.” How we choose to present ourselves can be both deeply personal and political. “At the end of the day I was gifted this body, this hair under my arms, by my tupuna (ancestors). Why not flaunt that?” she says. “I also feel that expressing self-love as a wahine Maori, a woman of colour, is a radical form of self-actualisation in a world of predominantly colonial beauty standards. And that to me is the most skuxx thing of all.” 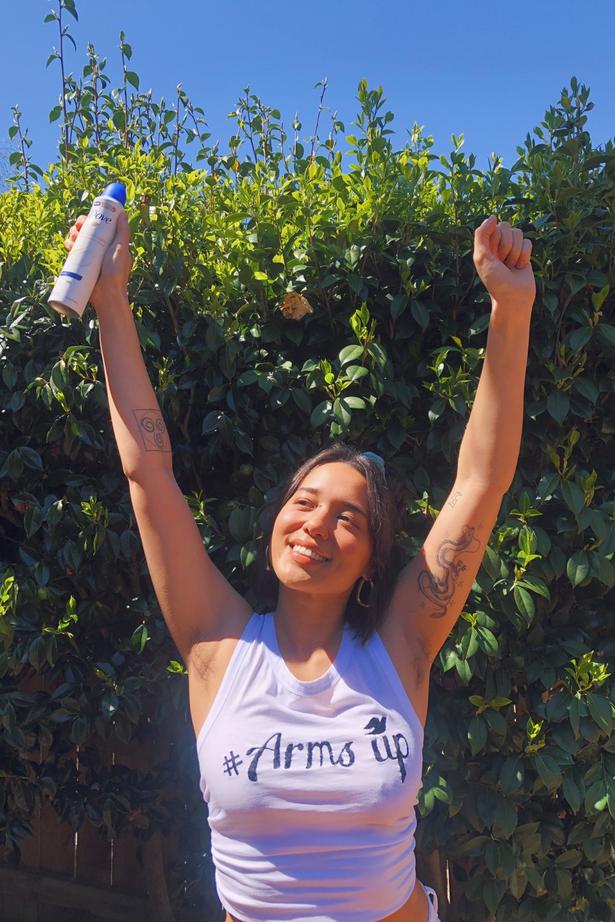 She’s joining Huriana, Jess and Morgan in raising their #ArmsUp. They’re all getting behind Dove’s campaign and encouraging followers to do the same. To amplify the message further and support more New Zealand women, Dove has also partnered with Nope Sisters on a limited-edition range of singlets for the campaign, with 100 per cent of the proceeds going to Women’s Refuge.

Britt and Johanna Cosgrove founded their social enterprise Nope Sisters to “make dope stuff for good causes”, raise money for charities and empower people, so teaming up with Dove for #ArmsUp is a natural fit. “Dove has always been at the forefront of body positivity,” says Britt, who felt the pressure of “ridiculous” as a teenager, and was grateful for the brand’s inclusive approach. “I remember when Dove first came out in 2004 with its body-positive ads, it rocked the advertising game as we know it.” 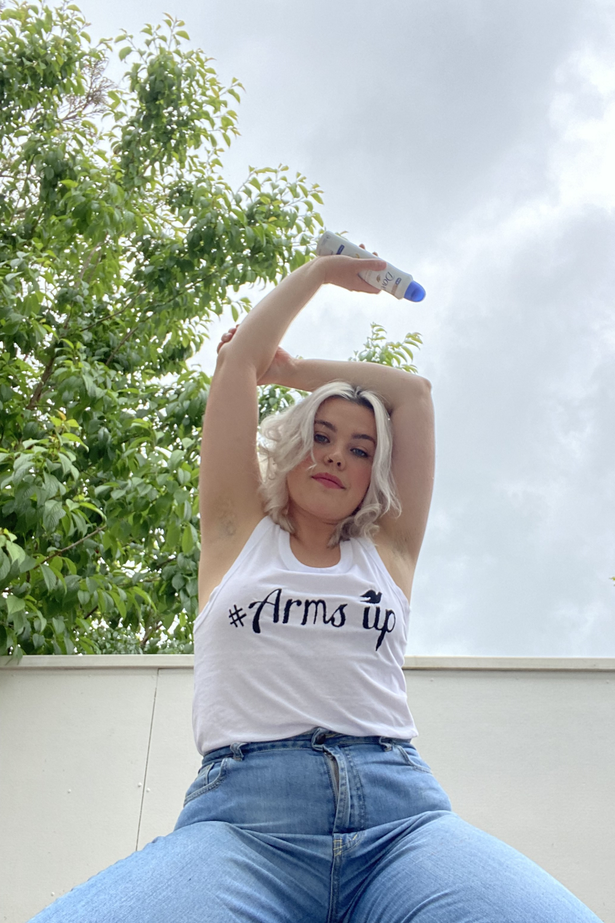 Sister Johanna agrees. “Dove’s approach of ‘Love the skin you’re in’ has always been a powerful resounding message amongst being bombarded by diet plans, bikini bodies and poreless skin,” she says. “Growing up in the early 2000s we were constantly fed this toxic rhetoric that women’s underarms had to be smooth, hairless and odourless, while men’s underarms had to be masculine, muscular and full bush in order to be ‘attractive’.” These binaries are incredibly harmful, says Johanna, who thinks everyone on the gender spectrum should be able to choose to present their underarms however they please. "Freedom of expression is beautiful.” Like many people, she doesn’t love her body all the time. “Sometimes I have a strained relationship with my body and other times I celebrate it,” says Johanna. “All of it is valid! And all of it is gorgeous.” By Nope Sisters supporting #ArmsUp, they both hope that young women today will see that there is no one beauty standard for underarms.

#ArmsUp is the latest in Dove’s ongoing commitment to promoting an inclusive view of beauty, presenting a vision of real and unretouched people, and encouraging body confidence. Its product, values and messaging are all focused on its mission to help all women feel beautiful. Most recently it launched its most caring antiperspirant spray ever, Dove Advanced Care. It is formulated to be even kinder to skin, combining the latest antiperspirant technology with moisturising cream and caring oil. Underarms continue to be a focus for the brand, which hopes women can find beauty in theirs, encourage others to do the same, and put their #ArmsUp.

Join Huriana and Dove in raising your #ArmsUp in support of Kiwi women on Body Confidence Day. Use #ArmsUp on your social media profile.

New Dove Advanced Care is available at all major retailers for $7.49 (RRP).