Over the past week, curious passers-by have been peeping into a dark Ponsonby Rd store. Ox-blood velvet drapes obscure the interior from the street and gilded lettering proclaiming its name has yet to be painted on the glass.

Could it be a new cafe or bar, or yet another boutique? Those who look around the open door are bewildered. The plastered walls are painted chocolate dark, with one side of the room entirely covered in an array of apothecary-style shelving on which stands a series of coloured glass vessels. There’s little else to see for now, save a square timber block of grooved dark wood.

Its design and placement have been carefully considered by store owner Tiffany Jeans. It functions as a serving desk, a wrapping station and a storage unit. The top has been hand-carved by a cousin, bone handles crafted by an uncle are still to be attached. “I am Maori and very proud of my heritage and culture,” she says, explaining that her Ngapuhi whanau are craftspeople: carvers and weavers. The counter clearly fits her definition of what she values. “It just has to be interesting, to have a story behind it.”

Tiffany is herself a storyteller, weaving her creative spell not with words, but rather all things evocative. Images, memories and the tactile are her triggers, fragrance is her medium. Her singular new store, Curio Noir, is a showcase for both her vision and her range of cult hand-poured candles, now supplemented with fragranced body bars and perfumes. “I wanted a space that was welcoming for men as well as women, dark and warming,” she explains. “Where you are forced to use your senses.”

This flagship for Curio Noir has been a while in the making and like much of what Tiffany does, it is a collaborative endeavour. She worked with award-winning interior designer Rufus Knight. Cabinetmaker Grant Bailey made the wall of walnut boxes, backed in brass. When Viva visited ahead of the store’s official opening, Serge Mouille pendants lights imported from Spain had yet to be installed. So too a cabinet of jewellery crafted by Zora Bell Boyd.

The box wall of products was artfully arranged, however, and candles lit, so that Tiffany and her manager Tautahi Subritzky could show the range to early comers. They were both draped in dark lab coats designed by designer friend Kristine Crabb who was the original stockist of Curio Noir. 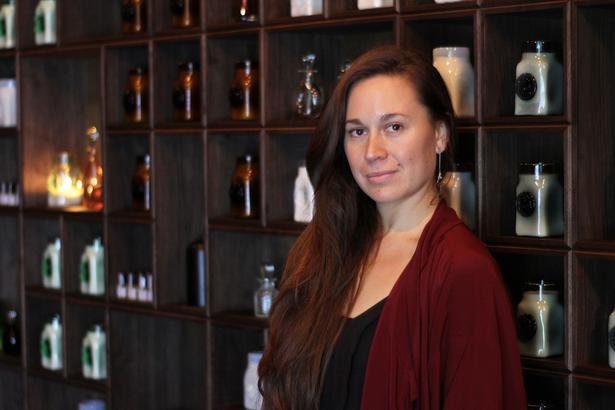 The initial offering was a skull head candle which featured in many a magazine here and overseas. Now her Lilith Doll candle head is a favourite. When skulls became a ubiquitous fashion and interior symbol a few years back, Tiffany took hers from the market. Trend is not the 35-year-old’s stuff in trade. She first came up with the skull design as a novel Until Death Do Us Part gift to guests at her wedding back in 2009, hand-casting the wax in the evenings, while she tended to her baby son. Each little head was wrapped in tulle and presented with a thank you note for coming to what was the first ceremony to be held at Clooney restaurant.

At the time Tiffany was a well-regarded stylist, working mostly on advertising campaigns, but a while later she told her husband, director Andrew Morton: “I can’t keep doing it. I feel like I’m selling my soul, I’m not fulfilling myself.”

So, Curio Noir — which she defines as an object of art to light up the night — was born. Candles come in coloured glass moulds by Matt Hall which can later be used as vases. Monmouth Glass provides bottles in three sizes into which a customer’s choice of four perfumes can be dispensed. “You are receiving your own piece of art, hand-blown glass.” For those who want less of an investment piece, Tiffany sells pocket perfumes, in sampler-sized bottles, sourced in France.

From there, she also obtains rare and intense fragrance absolutes for her formulas.

Now with three children, aged 14, 8 and 3, to juggle, Tiffany plans to split her time between the store — once home to Wunderkammer — and the family home, in nearby Grey Lynn. She has a studio there and online sales to manage. Her stylist’s eye helps shape visual campaigns, made in conjunction with her husband and other top creatives.

But it is when Tiffany talks about her fragrance inspirations that she draws the clearest picture. A trip with her grandmother to see Swan Lake inspired Feather My Tears, recalling the emotions of Odette’s mother crying a lake in grief. The fragrance is a white floral scent with cedar and mossy undertones in “lake blue” glass. Recalling the smell of her intermediate school principal’s pipe on a disco night, gave rise to Tobacco Night, bottled in brown. “You knew you shouldn’t really like it because it was so bad for you.”

She would rather her fragrances polarise people than have little impact and says her “dream come true” of having a store will allow more people to discover them.

Make the Most of Home Fragrance

How to Make Your Home Smell Heavenly