“Before getting into surfing I had this rushing, success-driven mentality" The first time Eleanor Ozich jumped on her surfboard and hitched a ride on the riptide at Piha’s notorious surf break The Cove, she was terrified.

But knowing her friends were watching from the beach, and that her instructor had talked her through the basic physics of the current, she stopped furiously paddling and surrendered.

“It’s something you have to do continually when you’re surfing,” says the star cookbook author, who has just released a new book, Lady Waves, all about her passion for surfing. “Just when you think you’re in control and you know what you’re doing, a big wave will catch you off guard and hold you under the water for ages. You just have to surrender.”

For every one of us who has attempted to surf only to find ourselves flailing in the whitewash or wiping out, there are just as many for whom it has led to a state of obsession. We all have those friends who (surf) wax lyrical about their last wave or their next, blowing off plans for a decent offshore.

“Surfing has done so much for me personally, for my mental health, and also through all the friendships I’ve formed through surfing,” says Eleanor. “The book is a small way I can give back.”

Lady Waves is her love letter to a pursuit she says has “changed the way I look at everything”. On the physical level, it’s given her a superior level of fitness and a newfound ability for arm wrestling, along with the know-how to freshen a whiffy wetsuit.

But more than that, the mum of three, known for her bestselling wholefoods cookbooks, founding Kingsland’s Mondays cafe, and for being a beacon of wellbeing to her 35,400 Instagram followers, says surfing has given her a sense of mindfulness. There’s nothing like sitting in the vastness of the ocean for hours, or confronting a wall of water to put your everyday worries into perspective.

“Surfing for me has been really humbling,” she says. “I’m the kind of personality that when I do something, I can’t just do it by half. I have to go for it and become really good at it. It’s actually been a real struggle with surfing because I’ve gone out there and I feel like I get beat every time, and I’m just defeated, I’m like, ‘I suck at this.’ So it’s been quite beautiful in that way because it’s taught me a lot of resilience. You just have to stick at it.”

READ: Our Favourite Eleanor Ozich Recipes Of All Time

She has fond memories of her teenaged self hitting the waves at Medlands Beach on Great Barrier Island with her longboarding dad. But she acknowledges she’s no expert, having returned to surfing in her late 20s. So she reached out to her network to collate the material in the book.

Lady Waves features nourishing recipes she’s written alongside contributions from 30 of her fellow female riders, along with surf photography, short stories, prose and practical advice — think moonlit escapades, tales of hanging 10 while pregnant, tips on what to pack for a surf trip. 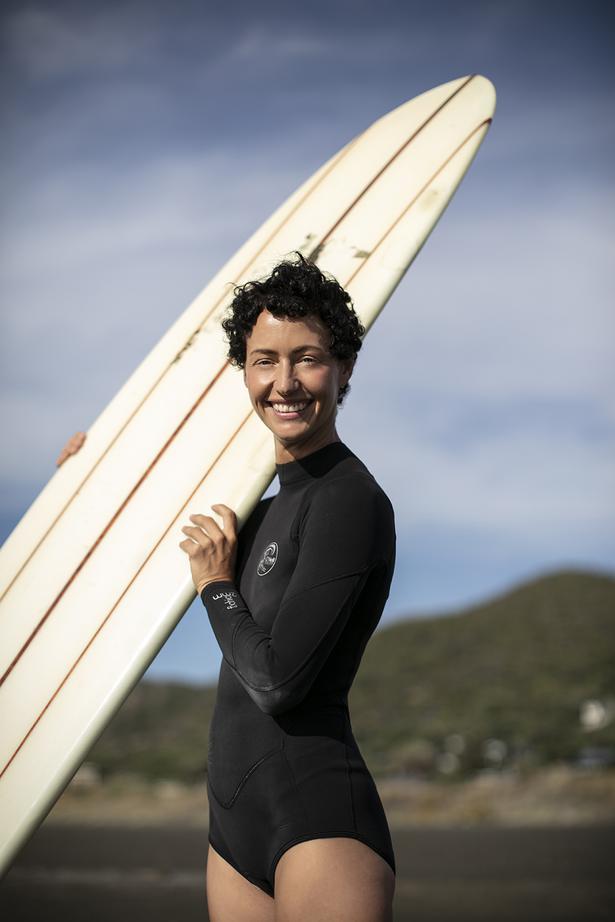 “Surfing has done so much for me personally, for my mental health, and also through all the friendships I’ve formed through surfing,” says Eleanor. Photo / Babiche Martens

Then there’s the poetry. Eleanor says she wasn’t expecting to receive as much as she did — but there’s clearly something about the sport that taps into the soul.

And it’s this transcendent side to surfing she says gets her back in the water up to four times a week.

She’s not the only Kiwi who has turned to the sport in recent years. While the pandemic has no doubt fuelled surfing’s huge growth in popularity here, as 9-5ers previously tied to the office are suddenly free to hit the waves, a surfer friend confirms that the waves are getting busier out there — particularly in Piha, something he confesses the old-school surfers who love their space aren’t completely, er, on board with.

While women make up a sizeable portion of surfers flocking to the sport, we now have better access to weather forecasting, and a greater breadth of surf resources online. Add to that a number of online communities offering advice and support, such as Ultimate Surf Bettys, a group aimed at women riders, with nearly 4000 members.

Then there’s Aotearoa Women’s Surfing Association (AWSA), which aims to encourage women and girls into the sport and promote an inclusive community. Eleanor is donating $2 from the sale of every book to the organisation, as she recognises that for many, breaking into surfing can be intimidating — there are multiple fears to overcome, not least the power of the sea or bailing in front of others.

“That’s what I really love about the dynamic of women surfing versus men,” says Eleanor. “Often the men are quite hardcore and very serious and out there to rip up the waves, whereas we’re out there to have a laugh and have fun and smile and cheer each other on. It’s not so competitive.” She recalls the pivotal moment a friend invited her out for a surf at Piha two-and-a-half years ago. It was the middle of winter, when the waves tend to be bigger and messier. She borrowed a board and bought a $5 wetsuit at an op shop.

“I remember feeling super-nervous about getting in the water. But then I went out and had heaps of fun and caught a whole bunch of waves in the whitewash. And from that day I was like, ‘This is it. This is going to be my new thing.’”

It took some time before she found her feet, a couple of late-into-proceedings surf lessons making her kick herself that she hadn’t taken them sooner.

From there she launched Lady Waves surf retreats last year, inviting female surfers of all levels for a weekend of wellness at the beach.

Guests took surf lessons, dined on plant-based meals Eleanor prepared and served in her own home, and lodged at Piha Hideaways, the beach-chic cabins she renovated herself.

The idea for the book formed once she got talking to her network and realised how many women were keen to contribute. Like Eleanor, many of those in the book are mums with their own businesses that afford them the flexibility to live the surf lifestyle. 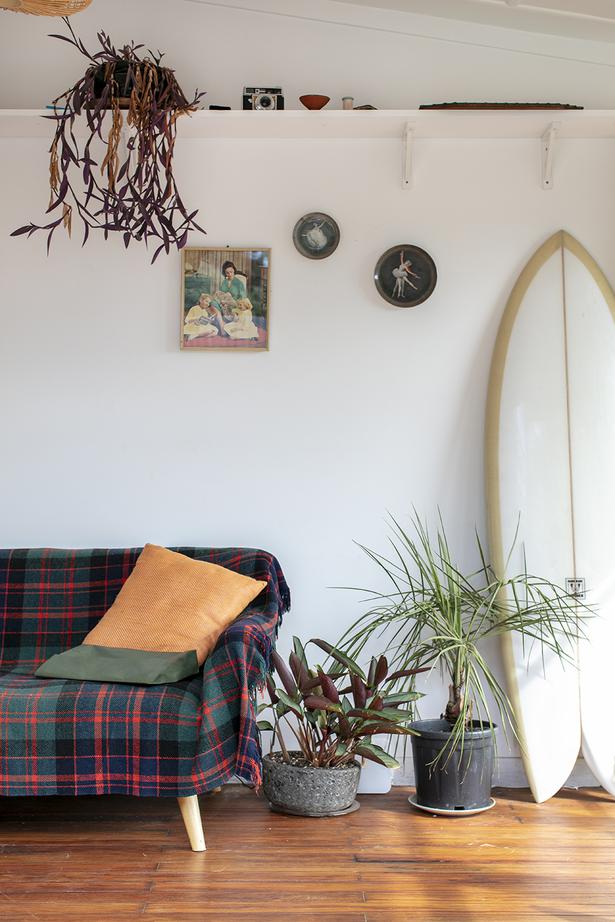 During her surf retreats, guests were served in her own home, and lodged at Piha Hideaways, the beach-chic cabins she renovated herself. Photo / Babiche Martens

Finding the time to get out there and surf isn’t always easy, especially with her children, Izabella, nearly 14, Obie, 10, and Archie, 5, in tow. But it helps that they’ve caught the surf bug too.

“After school they get off the bus and ask, ‘What’s the surf doing? Can I go surfing right now?’”

They’ll often head down to the beach and hang with other surf-mums and their children, with everyone tag-teaming in or out of the water.

“It’s one small example of just how inclusive and helpful the other women are,” she says. “Everyone wants to look after each other and make sure everyone’s having a good time.”

Like the practice of yoga, which regular practitioners often say affects all areas of life “off the mat”, so, it seems, does surfing. Without giving it too much conscious thought, but perhaps due to her regular brushes with dolphins, whales and seals while surfing, Eleanor says she’s made a shift to vegetarianism, something she shares with many other surfers. She’s yet to encounter sharks, but is philosophical about the ocean being their domain.

As for how surfing has trickled into her everyday life, the cliche has proven to be true: it’s made her more laid-back.

“Before getting into surfing I had this rushing, success-driven mentality. I always wanted to be doing the next best thing and succeed in my life. And surfing for me has really slowed everything down, and put everything in perspective. I’m looking at things differently and appreciating my children differently. I can’t imagine life without it.” 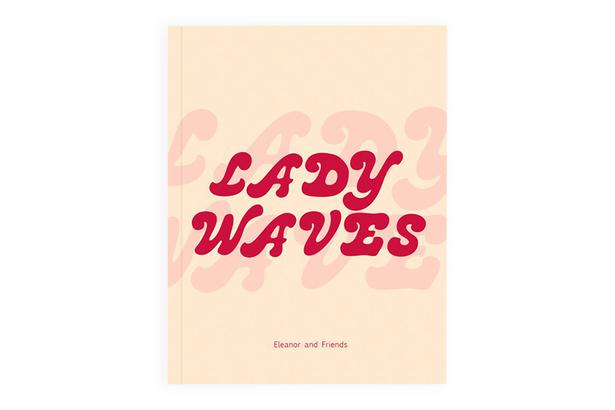