The designer, who stunned New York by showing his autumn/winter 2020 collection in LA, brought an Oscar-worthy golden gleam to the runway When Tom Ford announced he was showing his AW20 collection in Los Angeles just ahead of the Academy Awards, it was a given he’d get a stellar turnout. It was also a dagger in the heart of America’s fashion capital that the new chairman of the Council of Fashion Designers of America preferred to take his drawcard show to his hometown rather than retain a spot on this year’s depleted New York Fashion Week schedule back east.

SEE: The Coolest Looks From The Oscars Red Carpet 2020

A standout of the show which mixed his usual sexed-up glam with some more relaxed LA styling, was the makeup look. It’s not just us saying this, Tom Ford himself stated: “As a fashion designer, one is only able to present to the world one’s true and deepest ideals of beauty once. Only once. If you are lucky, the world responds.” 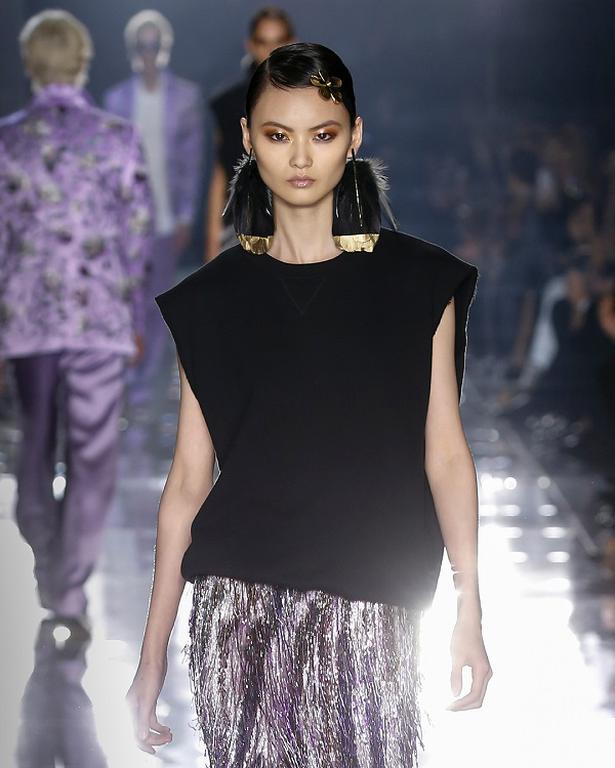 The sensual multi-dimensional beauty look epitomised his philosophy of the face. On a canvas of flawless skin, sculpted features were set off with a glossy nude lip which trained attention on the eyes. The idea was to enhance each model’s features, to bring out their own singular beauty. Ford has always loved a smoky eye look, this time it smouldered in layers of bronze, ringed round with fine smudgy liner.

Hair was slickly side parted with lead stylist Duffy straightening and folding the lengths into flattened French twists creating a boy crop effect that recalled both the 1920s and the 1960s. The latter era was further referenced by the finishing touch of a floral hair slide and feather earrings. Makeup artist Diane Kendal dipped her brush into four different Tom Ford Eye Color Quads, to select shades of gold, brown, red and pink to work on the various skin tones of the models in the show. 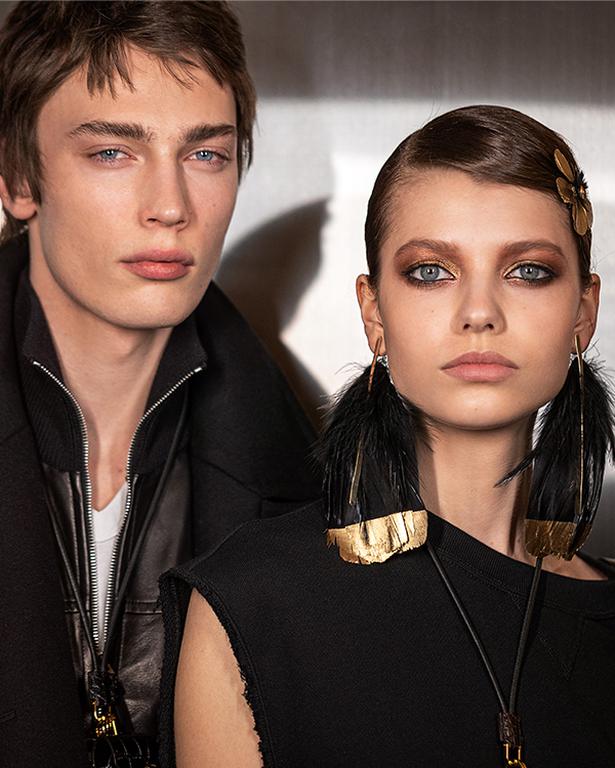 GET THE LOOK
Skin preparation started with Tom Ford Research Serum Concentrate and Crème Concentrate to prime skin ahead of using Shade and Illuminate Soft Radiance Foundation and then Shade and Illuminate Cream Duo for facial contouring. Emotionproof Concealer was used under the eyes, with brows lightly shaped with Brow Sculptor Pencil for a natural filled-in look.

To recreate the eye look, tone on tone of richly pigmented colour was applied. On lighter skin, the gold shade from Eye Quad 04 in Suspicious was swept over the entire lid, then feathered upwards towards the brow. On darker skin, the copper gold shade from 23 African Violet is used. Light strokes of Emotionproof Eyeliner in either in Espresso or Dominateur were feathered into the crease and the shimmering, bright copper shade from Quad 03 in Body Heat was blended on top and extended into the inner corner of the eye. The lower lash line was smudged with the warm russet shade from 04 Honeymoon. Eyeliner rims the waterline to intensify the look and Emotionproof Mascara adds the final touch.

For the show’s male models, Shade and Illuminate was also used to “enhance each man’s own face architecture,” said the brand. Alongside this everyday items from Tom Ford’s men’s grooming range, including twist-up concealer, bronzing gel, brow definer and lip balm were also used. (Available from Smith and Caugheys).

The 'Game of Thrones' actor and first global beauty ambassador for Clinique opens up — showing she was born to rule at quick-fi...