How to Make Your Skin Glow

Between bold winter lips and liner and sun-kissed summer skin, there’s a tricky time where these “go to” beauty looks feel not quite of the season. As the days promise to brighten and our clothes lighten, we look to shift from statement makeup to something a little more subtle.

That’s where pink comes in, but if like me you’re not necessarily immediately drawn to its girlish charms, then think again. Pink is the perfect shade to brighten dull winter skin, without overwhelming it. Piling on the bronzer sits awkwardly on a pasty complexion, so instead use a delicate flush of pink on the lips, cheeks and even the eyelids to bring your face to life.

Our model shot from the Dior haute couture runway shows how pretty this approach can be. Creative and image director Peter Philips explains “the eyes were bare except for a ring of translucent peachy coral”. (Created using Diorshow Mono in Pareo). The shadow was applied lightly across the lid with fingertips, then blended towards the temples. “Lips looked completely natural and transparent, with Lip Maximizer patted on for subtle shine.”

If you fear the Dior look is too Botticelli beauty for you, then be sure to keep a little depth of colour, be it on the nails or with a deeper lip or eye shade, but in a texture that isn’t too opaque.

“Spring is all about really radiant skin, about glow, achieved with skincare products and makeup products combined for a fresher look,” says Bobbi Brown’s main man in Asia-Pacific, Kai Vinson. His recipe is lots of moisturising skin preparation, with foundation coverage built up only in areas that need attention after judicious concealer use.

Underneath it all he favours tinted moisturising balm, with its pearl finish for illumination. Eye attention is on the brows, rather than winged, wedged, or cat-eye liner looks, although liner still has a less obvious role softly defining the lash line.

Lips are also less about precision, with colour having a pressed in quality, rather than being a precise pout. Stronger shades will be back for summer, but nudes and blush pinks are having a revival, with stains ranging through rose to those with coral or orange undertones on warmer skin-tones.

Another way to add interest to a fresh-faced look, says M.A.C.’s head of artistry for New Zealand, Kiekie Stanners, is to use slightly “dirty” shades around the eyes. From dusky pink, to greige tones and into purples, a cooler note comes from avoiding more obvious pastels. This approach makes the seasonal transition easier. 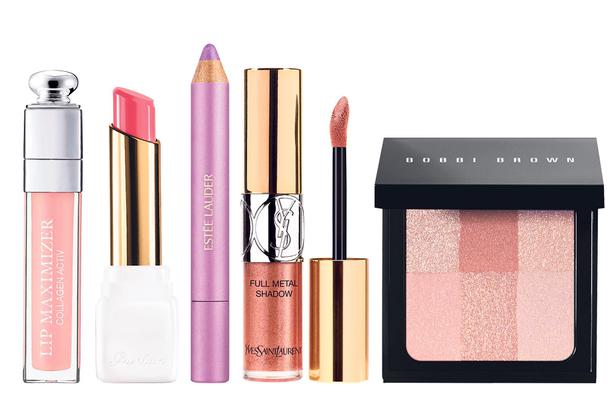 Dior Lip Maximiser $55.
Used for the model look on this page, the Maximiser is a plumper with a sheer pink tint. It has a tingly rather than a stinging sensation and a vanilla-mint scent. It gives instant volume and shine, but its marine-based fillers also act over time to smooth lips.

Guerlain KissKiss Roselip in Pink Me Up $52.
Guerlain reinvents its KissKiss lipstick as a balm, moving from black to white for the cubed canister of KissKiss Roselip, one of the stars of a makeup collection called Bloom of Rose. The tinted balm with sheen recalls a pioneering 19th century Guerlain rose lip stain, but adds hyaluronic acid for a smoothing effect.

YSL Full Metal Shadow in Pink Cascade $55.
For an impactful metallic finish, this liquid shadow slickly glides across the eyelid, thanks to the foam tip applicator, and it dries quickly. In 10 colours.

Bobbi Brown Brightening Brick in Pink $105.
Get the glow from a compact that combines the warmth of bronzer with the flush of a blush, allowing you to add luminosity at will. Ensure skin is well hydrated to enhance the effect.

Inika Lip Liner in Moroccan Rose $28.99.
Layered colour is good way to give dimension to lips, so rather than using a pencil primarily for definition, try using it less precisely all over your lips before applying gloss. This one is made from certified organic plant waxes and oils and natural pigments.

The Best Hairbrushes For Every Hair Type & Styling Need

Get The Look: Edwardian, Ethereal Beauty From Viva Volume Five

How to Pull Off Silver Eyeshadow