Runway Ready: 23 Ways To Reboot Your Beauty Look For Summer According To The Catwalk Fashion Month has been and gone, but inspiration remains.

Follow us across the globe from New York to Paris, as we chart the biggest beauty trends from the spring/summer 2022 shows, sure to offer a much-deserved boost to your hair and makeup routine.

After a pandemic-sized hiatus, New York Fashion Week returned to the Fashion Month circuit with all the vibrant colour, playfulness and self-expression we’ve come to expect from beauty looks in the Big Apple

The “mother” of makeup Dame Pat McGrath really wants us to lean into sunset hues for spring, as seen on models at Anna Sui. She created a 1970s-inspired pink glow along eyelids, with a feature metallic silver halo in the centre to eye-opening effect. A menagerie of pinks and magentas were pulled from three of Pat McGrath Labs Mthrshp Palettes: Decadence, Divine Rose II and Huetopian Dream ($121 each). Each hue bled into the next, forming a dramatic, metallic flush. 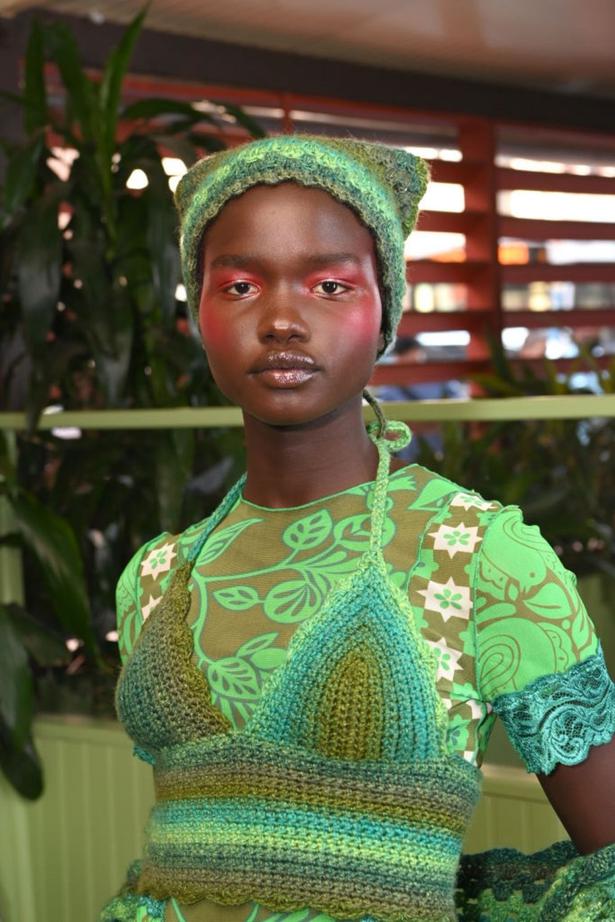 It was a kaleidoscope of colour at Prabal Gurung, where makeup artist Sil Bruinsma painted he inner and outer corner of model’s eyes with vibrant hues (think hot pink, acid green and turquoise) to reflect the rainbow shades on the runway. Experiment with this fun, aura-like effect using M.A.C Eyeshadow in the shade Triennial Wave, $33. To balance out the bright, Sil left the rest of the face low-key, while lips and cheeks were dressed with skin-tone flattering blush and lipstick. 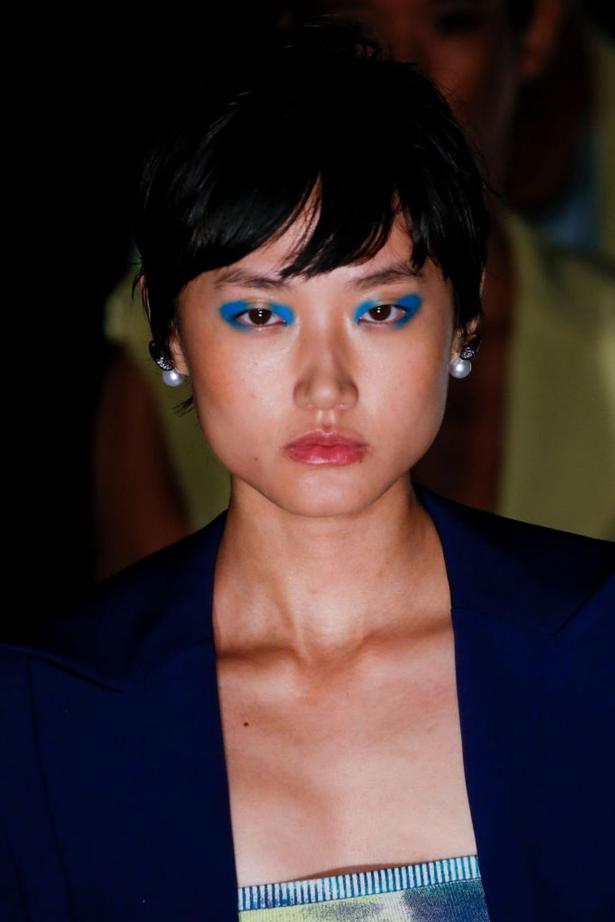 Bouffants and Beads at Moschino 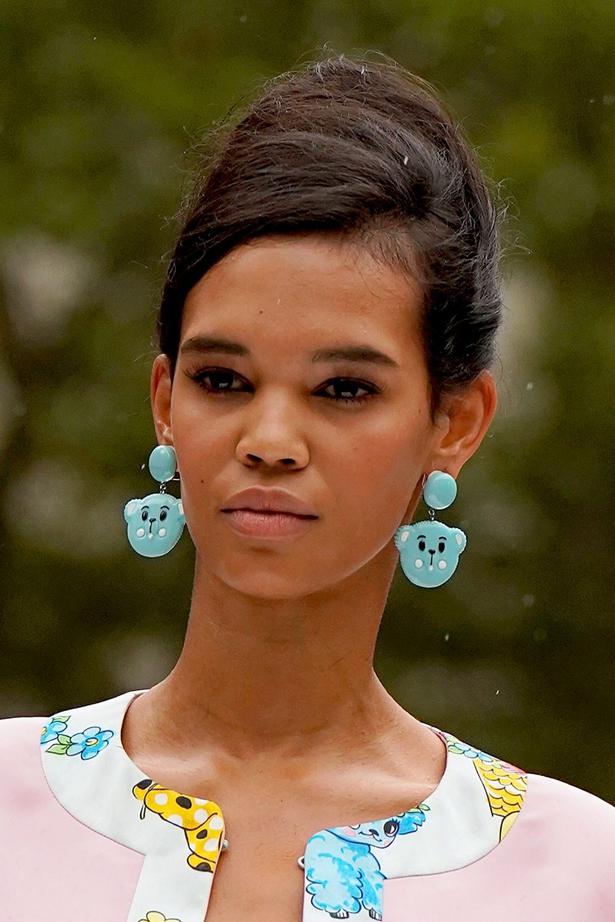 A spectacle to say the least, the beauty looks at Thom Browne were far from forgettable. Set in a make-believe garden, models were adorned with a grey, 3D floral design created by makeup artist Isamaya Ffrench, designed to replicate patterns in the collection. These swirling silver florals were complemented by a sculptural hair look dreamed up by hairstylist James Pecis, which included tight twists, rope braids and silk blooms. Elsewhere on the runway, Isamaya used M.A.C Chromacake, $60, to paint geometric patterns on models’ faces. There were many elements competing for attention at Collina Strada (bleached brows, coloured hair streaks, crimping and messy top knots) but it was the sprinkling of ear glitter that made the biggest impression. Makeup artist Allie Smith used iridescent glitter to adorn makeup’s most uncharted territory with golden shimmer. Try Unleashia Get Loose Glitter Gel, $25. Technicolour hair extensions were courtesy of hairstylist Evanie Frausto, not only offering extra length but extra wow-factor, too. 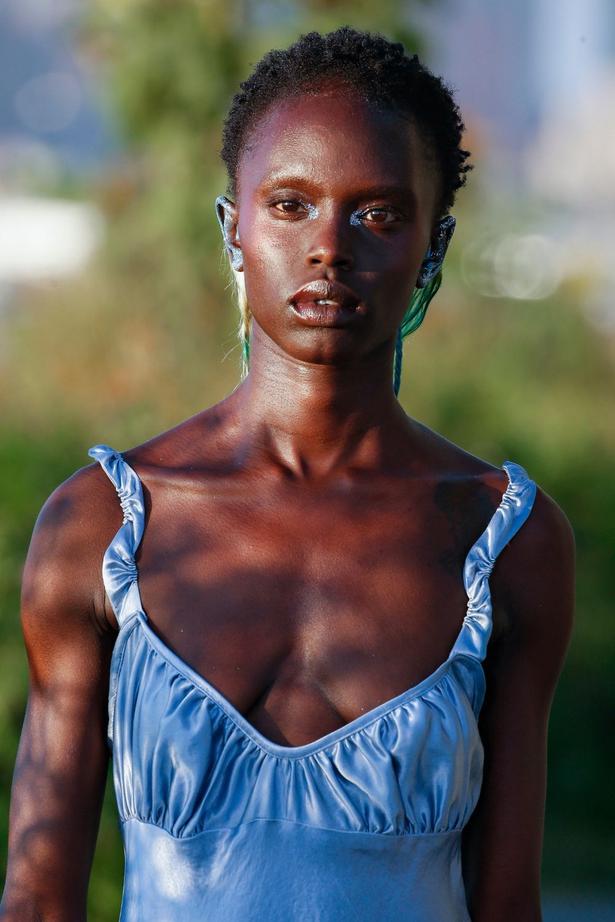 Voluminous skirts and exaggerated silhouettes at Christian Siriano needed a beauty look that wouldn’t get lost, and hairstylist Jawara Wauchope certainly delivered. Using extensions, ribbon, wire, a Dyson Supersonic Hair Dryer, $649, and what we can only imagine would be a copious amount of hairspray, Wauchope fashioned braids into “S’ shapes in models’ hair. For makeup, artist Sofia Tilbury created a striking winged eyeliner look, using the brown-black side of the Charlotte Tilbury Super Nudes Liner Duo, $46, and smoked it out using a matte black eyeshadow. 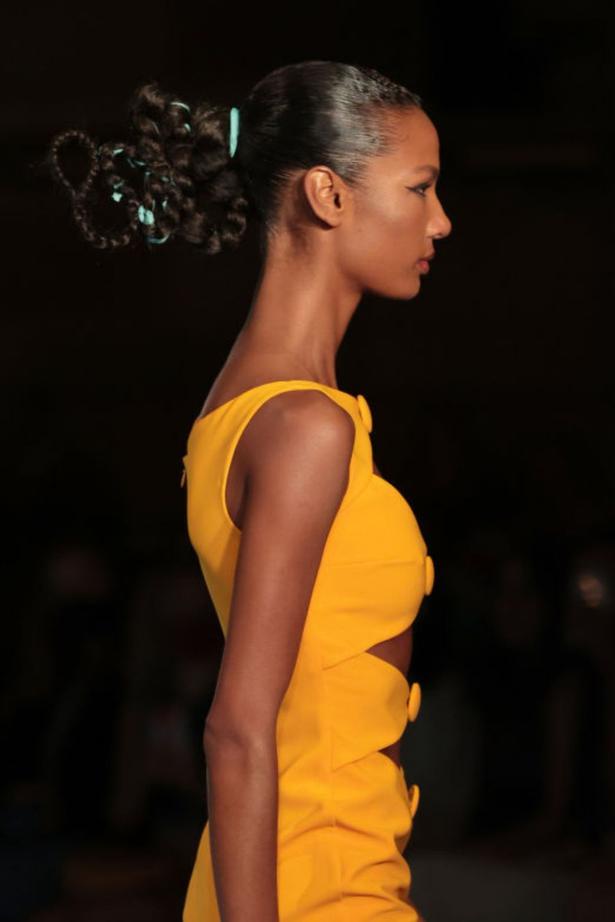 There was no shortage of swoon-worthy beauty moments during London Fashion Week, ranging from the dramatic (metallic makeup) to the innovative (tassel ponytails) and everything in between. Here, the most unforgettable makeup, hair and nail moments from shows in The Big Smoke

The digital shows were equally as impactful, evidence being the bold beauty moments at Matty Bovan that were noticeable even on screen. Nail artist Emily Rose created monochromatic nail art using OPI nail polishes at opposite ends of the colour spectrum. Her checkerboard creations reflected the collection’s psychedelic patchwork-like designs. Try OPI Nail Polish in the shade Black Onyx, $20, and I Cannoli Wear, $20.

According to makeup artist Thomas de Kluyver, the days of swiping on a single shade of lipstick are over. At KNWLS, Thomas created a multi-dimensional lip in a variety of finishes and hues. While one model’s lips were lacquered in several shades of matte orange for a poutier look, another’s were coated in a menagerie of metallic blues. Try Byredo Colour Stick in the shade Kinda Blue 442, $56. Pouts aside, there were pastels and iridescent makeup aplenty — all equally striking and expertly applied.

It’s long been said London is the birthplace of goth, so it came as no surprise that makeup artist Rebecca Wordingham debuted a spooky eye look at Eftychia. Haunting and dramatic, some models wore a smudged smoky eye using black eyeshadow that bled into rusty brown hues around the edges, while others donned black eye makeup with sharp points for a creeped-out clown feel. Try Stila Smudge Pot in the shade Jet Black, $32.

Metallics were also on the menu at Osman Yousefzara, with makeup artist David Gillers covering models’ eyes, cheekbones and lips in shimmering shades of gunmetal silver, rose gold, sapphire and sage green. Try Nars Single Eyeshadow in the shade Tropic, $31. The foiled finish effect also cropped up on lips too, but this time in a rich, burgundy hue. The beauty look at Paul & Joe heaped on the fun and frivolity, with a mix of clouds, flowers and rainbows hand-painted on models’ eyelids with childlike abandon by makeup artist Georgina Graham. Try Viseart Eyeshadow Palette in 08 Editorial Brights, $165. Complexions were kept fresh and seemingly makeup free — just like a carefree kid. Year after year, season after season, Milan Fashion Week always brings the glamour. From neon eyeliner to twinkling diamantes, the beauty looks from the spring/summer 2022 shows in the Italian fashion capital put us in the mood to party

Dame Pat McGrath directed the theatrical makeup look at Versace, where eyes were highlighted by neon bright hues in shades of lime green, as well as electric and royal blue. The duo-toned eyeshadow look was created using shades from the Pat McGrath Labs Mthrshp Mega: Celestial Odyssey Eyeshadow Palette, $233. On poker-straight hair, hairstylist Guido Palau recreated the half-up hairstyle that defined the early Noughties. We can only imagine how many bottles of shine spray the hair maestro went through to create this glass-hair effect. Drawing inspiration from the glitz and glamour of Studio 54, makeup artist Peter Philips blended not one but three sunset shades to create the strong blush that extended from models’ cheekbones to temples at Fendi. He blended a caramel, peach and yellow shade together for a multi-dimensional finish, one that popped against models’ skin tones but echoed the golden hues that ran throughout the collection. A bronzy winged eyeshadow bled into ombre cheeks, while a red lip courtesy of Dior Rouge Dior Couture Finish Refillable Lipstick in the shade 999 Velvet, $66, made for a bold finish. 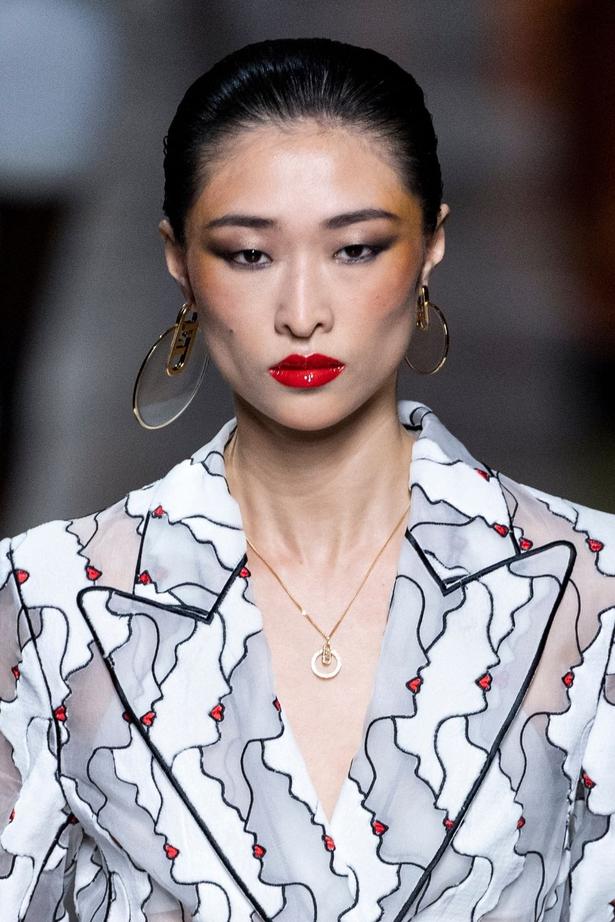 You’d be forgiven for thinking you’d stepped back in time at Missoni, where the beauty vibe was a clear throwback to the 1990s supermodel era. Makeup artist Hiromi Ueda drenched models’ lips in glossy berry shades, like Bobbi Brown Crushed Liquid Lip in the shade Cool Beets, $50. Edgy and exaggerated winged liner made a statement for eyes, with licks of brown liner flicking sharply upwards and outwards. The beauty look at Etro was all about a smattering of rhinestones and studs in myriad shapes and sizes underneath models’ eyes. Makeup artist Lisa Butler created a Euphoria-esque twist to the relatively pared-back beauty look by using metallic rhinestones that danced whenever the light hit. Try MCo Beauty Sparkle Face & Body Jewels, $9. A sweep of peachy blush over the lower part of models’ cheeks softened things up. 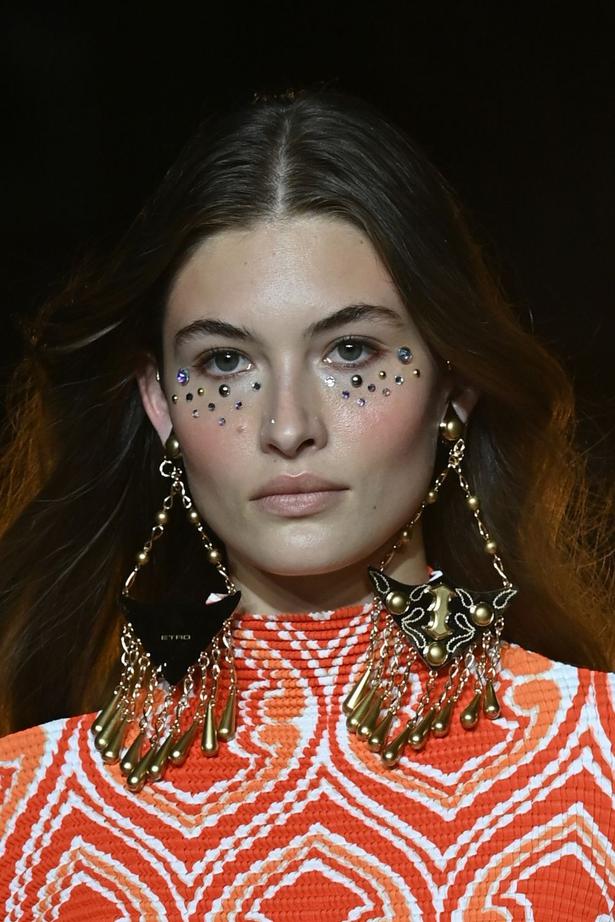 Frosty eyes cooled things down at Giorgio Armani, giving weight to our argument that yet another prolific 1990s beauty trend is back. It was a look dreamed up by makeup artist Linda Cantello, who fashioned flicks out of sky-blue eyeshadow and kept the rest of makeup luminously minimal. Try Clinique Chubby Stick Shadow Tint For Eyes, $45. While some models wore head scarves, others wore a pile of ultra-fine braids atop their heads, as created by hairstylist Roberta Bellazzi. The last leg of Fashion Month was a remix on the classic French girl aesthetic, with polished-but-less-than-perfect beauty looks sent down the runway at Saint Laurent, Dior and Givenchy. Think lightly blurred red lips, tousled bobs and a fresh take on the classic winged liner. C'est Magnifique!

Nothing screams French girl chic like a deep, cherry-red pout, and no one understands this more than Saint Laurent. The perfect accoutrement to Anthony Vaccarello’s sophisticated designs, the makeup look focused on lips in a scarlet shade so brilliant that sunglasses were a must. Emulate the look yourself with M.A.C Lipstick in the shade Ruby Woo, $35, but remember to keep edges slightly blurred, in keeping with the ‘undone’ French sensibility. 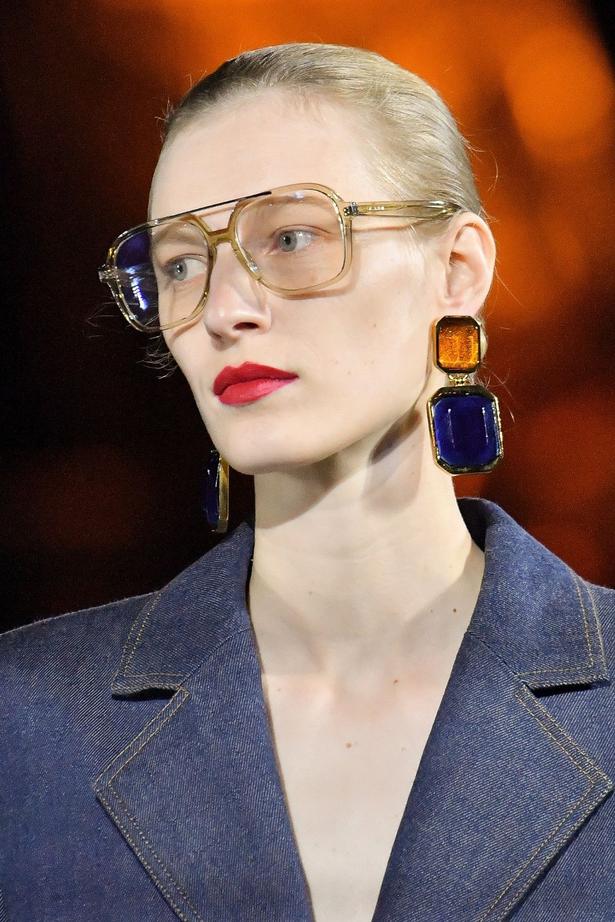 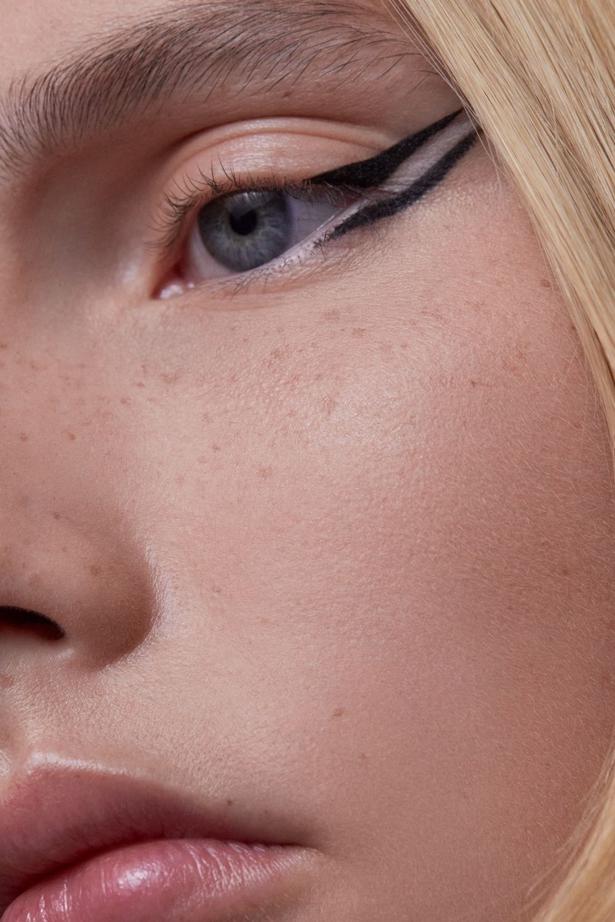 If matching your eyeliner is the bane of your existence, then this squiggly eyeliner trend is for you. Makeup artist Lucia Pieroni drew streaks of colourful eyeliner under models’ eyes for a relaxed take on the graphic liner trend. Rather than hug the lash line, Pieroni kept strokes uneven for a painterly finish. Try Estee Lauder Double Wear Stay-In-Place Eye Pencil in the shade Sapphire, $59. Heart-fluttering lashes were the standout feature at Matthew William’s Givenchy, with makeup artist Lucia Pieroni adding false lashes to models’ upper lash lines, then drawing the outline of a larger eye using a black kohl eyeliner. Try Ardell Aqua Lashes 342, $16. The ultra-fluttery lash design framed the outer corners of the eye and was lightly smudged for a more lived-in finish. No one does chic bobs quite like Chanel. Bluntly cut to the jawline and styled poker straight, the look oozed elegance. Try ColorWow Extra Mistical Shine Spray, $65. But bobs aren’t the only ‘do worth mentioning — long, glossy locks, sophisticated pixie cuts, modern mullets, shags and softly tousled waves (some adorned with cute bows and others with bejewelled headbands) were courtesy of hairstylist Damien Boissinot. How To Humidity-Proof Your Haircare Routine

Whether your hair is straight and fine or coarse and coily, when it comes to hair, there are few foes more notorious than humidity

9 Of The Most Wearable Runway Beauty Looks Of 2019

Fresh from New York, Milan, Paris and London fashion weeks, we pick the best beauty looks for all ages