The Duchess of Sussex brings the glamour at one of her final royal engagements, the Mountbatten Music Festival. Photo / Getty Images We all knew it: Meghan's first appearance back on British soil after the couple's announcement to leave their position as senior royals earlier this year was always going to be a talking point. How would she act? What would she wear, and what — if any — would be the hidden messages behind her outfits? What I didn't count on was how remarkably different her makeup would look. We've all heard of 'game face', but never before have I seen more of a fitting example.

As a newly-wed, the Duchess of Sussex was all about the simple, barely-there makeup. Even on her wedding day, Meghan took a suitably subtle approach to beauty. Her makeup artist Daniel Martin applied a light wash of foundation and concealer (just enough so as not to cover her natural freckles), a few strategically-placed individual lashes and a peachy, semi-sheen lipstick.

According to Martin, the makeup trial happened over text message, which I can completely believe: Meghan's look had all the trappings of the 'no makeup makeup' trend. Perhaps it was the fact that she was reinventing herself as a member of the Royal family, but that subtly stayed with her — until now.

Since her and Harry's announcement in January to step down, Meghan has been keeping a low profile. But boy, was she back with a bang. Last week, all of the soft, subtle makeup has been thrown out of the window. In its place? Bucket-loads of glamour and a healthy dose of Hollywood sparkle. We're seeing a return to the makeup she'd wear pre-Harry: bronzed cheeks, kohl-rimmed smokey eyes and a full, glossy brick-red lip. 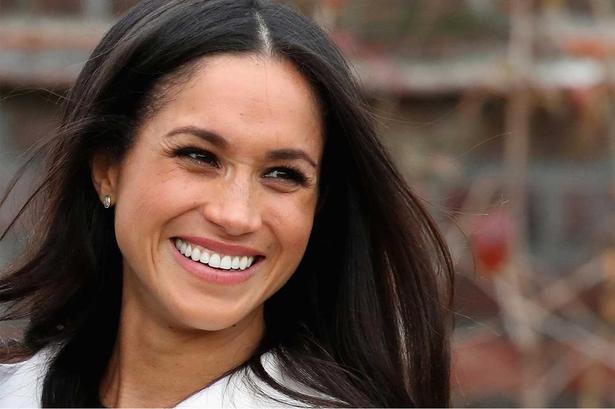 Meghan has long been a fan of the 'no makeup makeup' look, as pictured at her engagement announcement in 2017. Photo / Getty Images

Meghan still veers away from huge amounts of foundation, because frankly she doesn't need it. She saw London-based facialist Sarah Chapman ahead of her wedding day to get her skin in peak condition, and it looks like she's certainly been continuing with some skin-boosting treatments more recently. But instead of a little pop of pink-y blush on the apples of her cheeks, which is what we've been used to over the past 18 months, Meghan has been wearing a full-on illuminating rosy bronzer. If I had to hazard a guess, I'd put it down to the Buriti Bronzer by RMS, $49 (a brand which Meghan is rumoured to use) and a dusting of a bold blush like Powder Blush in Orgasm by Nars, $53.

READ: Kate Middleton Shows Celebrities How It's Done On The Red Carpet

Her eye makeup has ramped up, too. Gone is the light wash of creamy eyeshadow with just a coat of mascara, and in its place an unashamedly bold, full smokey eye. I wouldn't be surprised if she used a combination of eye products by Charlotte Tilbury, such as the Luxury Palette in Queen of Glow and Rock 'n Kohl Eyeliner in Bedroom Black. Tilbury paints the faces of stars including Penelope Cruz, Amal Clooney and Kim Kardashian West, so she certainly knows how to nail the glamorous aesthetic. Meghan's lipstick looks like it could be Mac's Patent Paint Lip Lacquer in Slick Flick, $50.

Meghan has gone back to her Hollywood roots, and I think she looks amazing for it. It's quite obvious she's had a weight lifted from her shoulders. Her skin is clear and bright, her posture more relaxed and her beaming smile speaks volumes. The transformation back into a Hollywood star has begun.