Beauty recipes from centuries ago have more in common with the trendy clean brands we covet now than you may think. That’s the view of University of Auckland academics who have researched just what women from the Renaissance through into the 17th century used on their faces and hair. Art historian Dr Erin Griffey worked with the chemistry department to test drive some of the many recipes she has amassed and says: “What surprised me was the prevalence of ingredients we use today. A lot of ingredients that natural brands say they’ve discovered… they’ve been seen before.”

Well-born women followed similar skincare routines to those we still use: washing their face with floral cleansing waters or milks, including from goats; exfoliating with ground rice and nuts; moisturising with creams and plant oils; and using salves to calm spots and pastes to lighten freckles. The equivalent of face masks were also popular, applied on soaked cloths, either for a short time or overnight. Warm water and lint or muslin cloths would be used to remove residues, similar to having a facial and being flannelled down.

Sperm whale oil and lead powder don’t feature in our face potions these days and raw eggs in hair masks wouldn’t last the distance from mixture to market while meeting modern preservation safety standards, but more appealingly honey, herbs and spices and aloe juice were as popular then as they are now. Grapes — latterly lauded for their antioxidant extracts — were squeezed centuries ago for juice to be applied to the face. Lemon was used for its cooling as much as its astringent qualities, as were various lettuces.

READ: Why Meghan Markle Isn't The Only Royal To Dabble In Wellness Fads

When it came to bathing, one of the big differences from now and then was frequency. “They had a sensory world that was far richer than ours,” says Erin, or to put it bluntly: “We’re more sterile, they had stronger scents.” Queens had access to fresh under-garments daily but heavy outer garments made of rich fabrics were more likely to be aired than ever laundered. Carrying a perfumed pomander was common among the nobility. Hair “washing” was by way of regular brushing and combing, which had the bonus of removing nits.

“It [hair] would have looked OK but would have had an intense musky smell to it,” says Erin. Between rare immersion in water, hair would have sponged with various tonics. Beet pulps were used as thickeners. (Today scientists are investigating using pulp in biodegradable polymers.) Rosemary was a popular ingredient steeped in water that was sponged onto both the face and hair, where its fresh smell was no doubt a boon.

Further analysing some of the beauty recipes for their true effectiveness is the next step for Erin and the scientists. They have already compiled an explanatory booklet featuring a small selection, of which we have chosen two. The booklet was used in a public talk Erin presented in August, as part of the 2019 Raising the Bar series where the university connects the work of its academics with the community. (Look out for Raising the Bar to return in 2020). 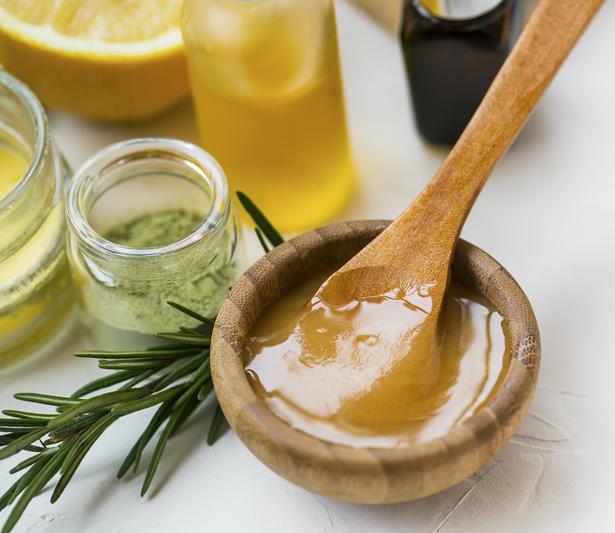 Honey and rosemary are key ingredients in these recipes.

PIMPLE POTION
This and the following recipe are from the Accomplisht Ladys Delight in Preserving, Physick and Cookery by Hannah Woolley (1676).

To take away pimples: Take wheat-flour mingled with honey and vinegar and lay it upon them.

Here’s How
1. Mix honey and flour to make a paste.

3. Cleanse and exfoliate your face.

5. Wait until mixture is dry and remove it using warm water and a washcloth.

Note: Dating back to Hippocrates, honey has been used as a medical therapy. Honey has apparent antimicrobial and anti-inflammatory actions. A recent randomised controlled trial with blinded assessment showed that medical grade honey.glyercine formulation is an effective treatment for rosacea.

HAIR TONIC
To keep the hair clean and to preserve it, use two handfuls of rosemary and spring water and sponge onto hair (historic instructions abbreviated).

Here’s How
1. Boil one litre of water in a kettle. Add to a large pan with rosemary.

2. Let the pot simmer for one hour, until half of the water has evaporated.

4. Stain out the rosemary and save the water.

We’re finally waking up to the forgotten puzzle piece of wellness and beauty, yet so many of us are getting less sleep than eve...

Here's What To Expect When You Switch To Natural Deodorant