Marc Moore of Stolen Girlfriends Club Gets a Haircut

. . . and donates his locks to Freedom Wigs He's a familiar face in New Zealand's fashion industry, and after seven years of growing his hair, creative director of Stolen Girlfriends Club and DJ Marc Moore has cut off his trademark long tresses.

His hair, cut by top stylist Mana Dave of Blaze Salon and Redken NZ's artistic director, has been donated to Dunedin-based charity Freedom Wigs, helping raise awareness around hair loss and alopecia in the process.

"It’s nice to know that my hair will actually help someone," says Marc. "They call it ‘virgin hair’ because I’ve never dyed it or bleached it. But I am far from a virgin so let’s just get that straight! We asked around our networks and I also spoke to alopecia ambassador Anna Reeve — Freedom Wigs came up quite a bit, so the decision to donate it to them was an easy one."

The designer shares more about his transformation.

How do you feel with short hair?
I love my new haircut. It was amazing waking up the next day and not having hair all tangled around my neck and face. In the weekend I went surfing up north, and having short hair was the best. I kept doing hair flicks because I thought I still had long hair — so funny. I think I suit short hair better than long and now I’m wondering why I had it long for so many years. Damn! Who knew life could be improved with a haircut? Amazing. I’m digging it! 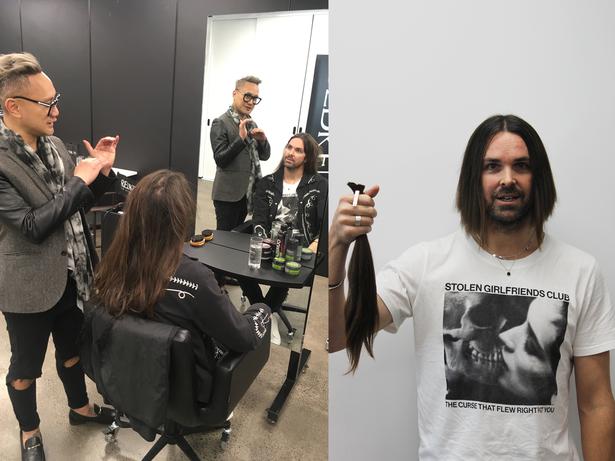 This is a big transformation for you. How long have you had long hair?
I’ve been growing my hair since late 2010. Basically, from early 2011 I just let it grow and never got a haircut. It meant I had to endure around 18 months of what we call ‘bob-life’ which was a bit embarrassing ... and meant a lot of hat-wearing. Guys with bobs are not cool unless you live in LA and play in a psych/surf indie band.

So it’s been a long time with the long locks. It got to the point where I’m probably known or recognised around town for being the guy with long hair. It’s become my trademark. But I think change is good, it’s nice to mix it up and do something different. The closer I got to D-Day the more nervous I was though. I never thought about the change or how drastic it would be. I actually think my friends aren’t going to recognise me at parties or when I’m out for a while.

What was it like working with Redken NZ artistic director Mana Dave?
I’m real fussy with my hair and always very careful with who I let cut it so perhaps that’s why I haven’t had a cut for like six years. I trust Mana, he’s so damn talented and I probably couldn’t have been in better hands, to be honest.

What have been some of your favourite hair styles over the years?
I think I suit short hair better personally. I’m really into shaved heads at the moment, probably because it’s the extreme opposite to having long hair. It always looks tough and is low maintenance.