The new Flowerbomb? The latest fragrance from Viktor and Rolf

Viktor and Rolf are thinking of branching out into pop music. "We're always saying that we want to make a record," says Viktor Horsting - the bolder, brighter-faced half of the Dutch design duo. "Everybody thinks they can be fashion designers and perfumiers," adds Rolf Snoeren, "so maybe we can be singers."

If it weren't for a slight creasing up of the eyes behind the pair's identikit glasses - and that we have just touched on Justin Bieber's recent incarnation as a perfumier to underage girls - this statement could be taken seriously.

The 45-year-old designers have been known to veer wildly off-piste during their 20-year career. Also, they're not exactly gag merchants. Indeed, the hour we've spent together in a corner of the Claridge's tearoom has felt more like taking part in a laborious piece of performance art than conducting an interview. It's not that Horsting and Snoeren are sullen or disagreeable, just vaguely uncomfortable with the whole journalist/createur relationship, and seemingly reluctant to muster a meaty sound-bite between them.

Perhaps scents - we're here to discuss their new fragrance, Bonbon- aren't the easiest thing to talk about. Once you've covered the bow-shaped bottle (a leitmotif from their recent couture collection) and the "caramel notes harkening a sense of comfort for the traditional gourmandise ingredients of sugar and butter", where do you go from there?

Yet given their often exquisite and always unpredictable creations, I had expected some wonderfully pretentious "conceptual" discourse to carry the whole thing along. After all, it's Viktor & Rolf - the Marcel Duchamp of the fashion world - who once dressed the model Maggie Rizer in layer upon layer of shredded ball gowns (15 outfits in total, their entire collection) and dubbed a couture collection, featuring Pierrot and Harlequin costumes grotesquely mushroomed at the neck, "Atomic Bomb". They cleverly dressed and undressed models on a revolving runway one year and painted them black on another occasion.

Back in 1996, they created a perfume that you couldn't open, in an undisguised sneer at an industry that is more concerned with packaging than content. "That was part of an art project in which we visualised our ambitions in miniature forms," Horsting trots out so tonelessly that I wonder whether the pair are in on their own joke, and like their virtual perfume, playing at being empty.

"There was also a miniature store and a miniature catwalk and a perfume. We've always believed in the power of visualisation."

It has served them well. In the past 15 years, they have morphed from couture designers of surrealist creations only the likes of Lady Gaga and Daphne Guinness could wear to shrewd businessmen who extended to ready-to-wear clothes in 2000, designed a sell-out H&M diffusion line in 2006, opened their first stand-alone boutique on Paris's Rue Saint Honore last December, and produce eight collections a year.

Their first fragrance, Flowerbomb, remains one of the top-selling perfumes in the UK. "At first, we were working more in the art world," says Snoeren, who met Horsting at 18, when the pair were studying fashion at the Arnhem Academy of Art and Design in the Netherlands. "We didn't really know about the fashion world or how to enter it, although we had always been fascinated by its bipolarity."

Are they now insiders? They consider this a moment. "I would say that we have one leg inside and one leg outside," says Snoeren, seeking approval from Horsting with his eyes. "We are a part of it but at the same time we comment on it."

"It's always a challenge to strike a balance between creativity and business," Horsting continues, seamlessly taking over from his colleague. "It's hard, having to be creative on demand, but that also pushes you."

From their 17th-century studio on the Grand Canal in Amsterdam (both live in separate flats around the corner), the pair hone their unique and uncompromising designs. "We hardly ever argue," they announce in unison. "We are very harmonious," shrugs Snoeren. "When we have a difference of opinion, then we know that something needs more work. Viktor is really my best friend, which is what's so nice about him."

From all accounts, theirs was once a romantic relationship, and there is something of the old married couple about them. "Maybe we should start bickering then," deadpans Horsting, when I point this out. This would be futile, given they do share identical visions and lifestyles.

Unlike so many design houses, that communal vision has also always encompassed a refusal to use celebrities to sell their products. "We've never courted famous people as some brands do," explains Horsting. "I must say that I find that a little annoying," Snoeren adds quietly. "We don't want to use celebrities to sell our clothes or perfumes because it's not about them - it's about the story. 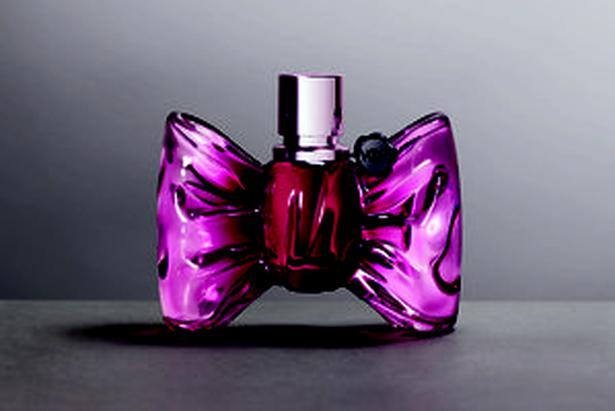 "With Bonbon, for example, we wanted a woman to identify with that story rather than it being a case of 'I want to be like so-and-so'."

"But we live in a celebrity culture," shrugs Horsting. "And when celebrities are attached to so many labels so quickly, it's a little boring. I don't think it always works either."

Yet when they dressed Anne Hathaway in a monochrome dress for the 2014 Vanity Fair Oscar party and a pregnant Natalie Portman in a red rose- embellished pink gown for the Golden Globes in 2011, "the PR return was huge. Two days after Natalie wore that dress, there was an $85 knock-off on a website," says Horsting. Did that annoy them? "Actually, it was so quick and so well done that we found it hilarious. "For us, it's more about being fascinated by a girl or an actress - then it's nice to work with her. But we don't have a celebrity fetish. When we dedicated a show to Tilda Swinton, it was because of her - not because she'd won an Oscar."

So there's no one they're longing to dress? "No," says Snoeren, crossing his arms. "Because we're not sitting around thinking that way." Even the world's number one clothes horse, the Duchess of Cambridge? "Kate Middleton?" Horsting murmurs, before covering his mouth at the gaffe. "Sorry, I forget the titles. Again, ours is neither a huge fetish for celebrity or aristocracy."

Snoeren and Horsting's lack of snobbishness extends to everyday fashion. At its best, style should "help empower you and make you feel better about yourself", they feel.

But they are reluctant either to praise or disparage any country for its dress sense. "We don't have those kinds of judgments about people," says Snoeren, visibly tiring of the discussion. "I suppose very high heels are not good right now," he sighs. "It just doesn't look very modern. And we're not big fans of extremely sexualised dresses."

"But with men it should stop at plucking their eyebrows," blurts Snoeren, the most animated he's been since we sat down. "That's something that we don't do." In their curious flatness as human beings as in what they have done for high fashion, Horsting and Snoeren have often been compared to Warhol ("a great compliment, that's for sure"). Yet although the parallels are glaring, so too are the discrepancies. For all the freshness they have brought to couture, ready-to-wear and even fragrances, they are not galvanised either by celebrity or an egotistical desire to impose their cultural vision on the world.

"Our grand plan isn't global domination," asserts Snoeren, "but to be happy doing what we do. We don't like to run towards things. Of course we want to open more stores and make more collections, but actually," he says, checking with Horsting first, "I think we are perfectly happy now."

• Bonbon will be on sale from Monday, in selected department stores and pharmacies.