Rosie after having the clip-in hair extensions applied. Photo / Supplied

The promise: Using cruelty-free and ethically-sourced, high quality hair, the Vixen & Luxe hair extensions promise to be particularly great for adding body to fine hair, as well as length. The company offers both clip-in and permanent hair extensions.

The clip-ins are made from 100 per cent human hair, and can be dyed to colour-match the user's hair. The total weight is 150g spread over three rows which is, for most people, a full head.

The company also offers a new style of permanent extensions called Smooth Weft, which it’s currently awaiting a patent on. Both the clip-in and Smooth Weft styles promise to retain all the variations in texture you’d expect from human hair, ensuring a natural fall and hair that can be straightened, curled, put up and coloured.

The Smooth Weft system is impressive, in that instead of using potentially damaging materials like glue, braids and heat, it uses tiny cylinders to cushion the natural hair, significantly lowering the risk of breakage and damage.

The practice: Kristal Sargent, founder of La Villa hair salon in Wellington’s Petone and inventor of the Vixen & Luxe extensions, applied my new clip-ins in under ten minutes. As my hair is long but fine, I was looking to them to add thickness rather than just length, which is exactly what they did. While the extensions looked slightly too dark before being put in, once they were on my head they blended so seamlessly I was shocked.

Parting my hair into three sections horizontally across the back of my head, Kristal started from the bottom and worked upwards, applying the three strips of hair and securing with clips. Backcombing slightly at the root helped them stay there securely. 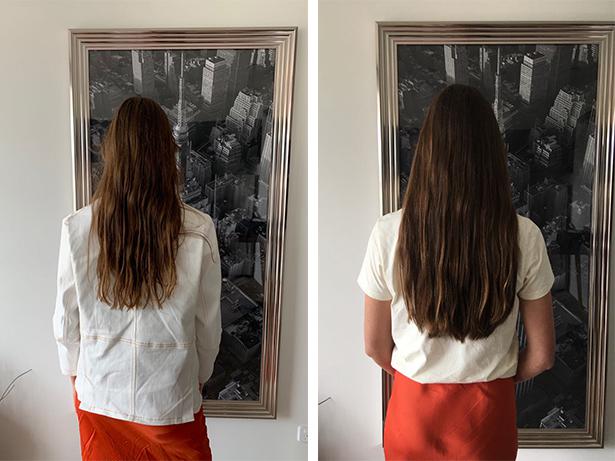 Left: Before. Right: After. Photos / Supplied

A few days later, I tried putting them in myself, which was definitely more challenging but was made easier by a helpful YouTube tutorial put together by the Vixen & Luxe team. A tail-comb would be a great tool to have, so you can part your own hair evenly and easily into the three sections, and some hair spray or texturising spray would also help to hold them in.

The most challenging part I would say is positioning them on your head so they're sitting flat, and the space between the clips is pulled taut to the head — especially when you can't see behind you. Obviously we don't want them to be visible, so I took my time making sure they were in the right place. The strip at the top is fairly thin, so concealing them under my hair wasn't too difficult.

When I managed to get them in and sitting nicely, the effect was the same as when Kristal did it — I suddenly felt like a mermaid with thick, lustrous hair. I’m looking forward to getting better at putting them in so the process is even more streamlined.

To take them out, Kristal advised tipping my head upside down, and they are easily and quickly removable by unclipping the clips, of which there are five on two of the bands and two on the other.

Unlike the permanent extensions, the clip-ins aren't for sleeping in, so it's just as well they're super fast to take out.

The place: These hair extensions can be purchased online, visit Vixenandluxe.com

The verdict: Being extremely low maintenance when it comes to my hair — I use the same shampoo as my boyfriend, often don’t condition, don’t own a hairdryer — I didn’t expect to be so sold on these extensions.

But when they were in, I couldn’t help but swish my hair back and forth constantly, which probably looked idiotic from an outsiders point of view. I’m used to having fine hair so there’s something intoxicating about suddenly having such thick hair, I can see how people get addicted to them.

I'd be interested to see what the effect is with just two of the extension strips rather than three, as this might be potentially more subtle than suddenly having ultra-thick hair.

Nevertheless, they’re great for people like me who are just wanting to add some thickness to their hair for special occasions, as they’re relatively easy to put in and take out (with practice). The company says they last 6-12 months with proper care and maintanence.

The worst part? Taking them out and being left with what nature gave you.