The designer and Project Runway judge shares his approach to appearance Benny Castles has never been one to shy away from making a style statement, but now the natty approach of the colourful designer is broadcasting beyond the fashion precincts of Auckland. As a judge on Project Runway’s New Zealand edition, expect Benny to amp up the reality television show’s sartorial splendour.

With his love of traditional menswear worn with a twist and a way with words, the 34-year-old is likely to have a big part to play in the outcome of the newly-aired show, which aims to anoint a future fashion star.

Benny has had personal experience of making his way up in the industry. He started work as a retail assistant at the World Man store in High St as a teenager, graduated to an apprenticeship in design with World and then became a partner in the business, alongside founders Dame Denise L’Estrange-Corbet and Francis Hooper, in 2008.

On buying trips for World’s beauty arm he has developed a love of fragrance, skincare and artisan craftsmanship.

The meaning of male grooming
I believe strongly in how you present yourself is how you want to be perceived. With fashion I like to encourage people to wear clothes that show off their personality and grooming, like fragrance, is another accessory or way to be individual. From my experience working with people, allowing yourself to look, how you feel, is a way of being comfortable and if required, at times, adding confidence and strength to your character.

Changing approaches
If anything, I may have become more lazy in my grooming habits. I, at times, have an unruly beard which is more in control than I am and I don't often get more than one haircut a year. I like to enter the hairdresser as one character and emerge another, rejuvenated and different, instead of up-kept.

As we have grown World Beauty my understanding and appreciation for skincare has matured and I take more care in selecting the products that best suit me as my knowledge offers a more distinctive view-point because I have learned more about the brands, ingredients, techniques and the skin itself.

The better educated you are the better decisions you will make when purchasing — finding sales staff who listen and are well trained is a great way to navigate the plethora of beauty products. 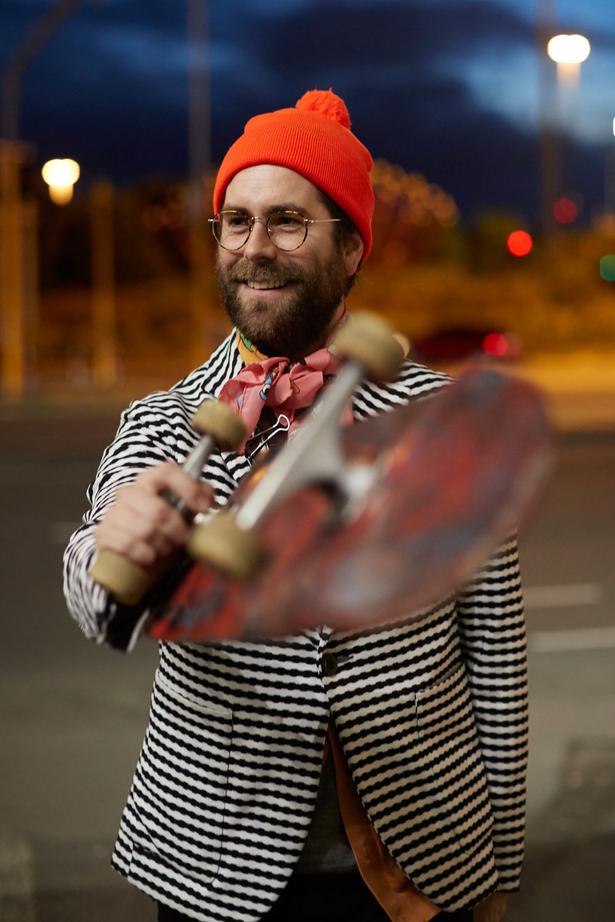 Appearance high and lows
Plenty I'm sure, but I have fashion designer’s memory: bright and shiny on the highs and foggy on the lows. I also have a healthy aversion to pictures of myself and have recently learned my recorded voice makes my stomach turn with repulsion. There was a ponytail and samurai bun as I called it around 2008, before the man-bun was an accepted idea — so I may have been off the mark there.

Early memories
My father used two fragrances that have always stuck in my mind and have somewhat inspired and educated choices we have made at World Beauty. They were Acqua di Parma, long before it became a globally recognised scent, and Ralph Lauren Safari, though mainly for the bottle.

First beauty buy
This would have to have been the fragrance CK One, I'm sure I thought I was quite cool in the 90s and that the idea of a gender fluid fragrance was revolutionary. I have fortunately been allowed some education since then. It wasn't until my first years at World when I first bought skincare which would have been Aesop's Camellia Nut Hydrating Facial Cream.

Focus on facial hair
The beard is in charge, where it goes I go and so on. Currently it is somewhere between, 'battling with the bottle' and Dr Richard Kimble, Harrison Ford's character in The Fugitive. 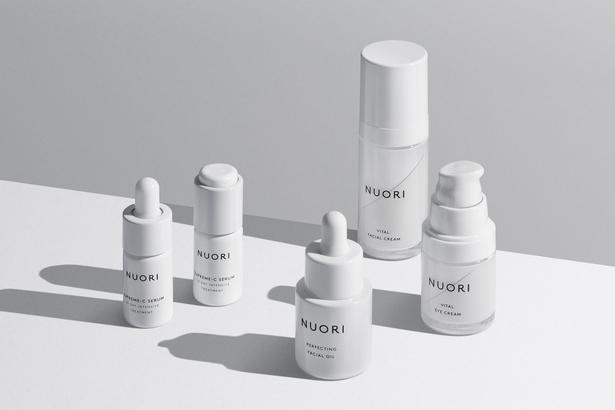 Fragrant journey
Fragrance is something I learnt about from my parents and when joining World my interest was given root to grow. As Francis, Dame Denise and I along with the team have developed the World Beauty concept we have been fortunate to meet and work with some of the most historic and iconic niche-luxury fragrance houses as well as some of the most dynamic and disruptive fragrance makers working today.

My interest has developed fully into a passion. I think it was once I was opened up to the storytelling aspect of scent that I became enamoured and felt it was conceptually and emotively something I could attach myself to and express myself with.

One of my favourite all-time scents is Arquiste’s The Architect's Club. The founder of Arquiste, Carlos Huber, who has visited World in New Zealand many times introduced us to this scent by telling us the story of spending lonely evenings in London and wandering to Claridge's Fumoir Bar where he would treat himself to a gin cocktail.

Being a trained architect mastering in historic preservation, he heard and was fascinated by the story of the architects of the early 1930s who frequented the bar and drank gin, smoking white vanilla pipes as they re-created parts of London in the Art Deco style. endeavoured to recapture that spirit in a scent which I think is one of the most sophisticated and elegantly distinctive fragrances.

When travelling to Paris to sell the World collections we were directed by my now partner to a brand called Cire Trudon their mastery of candle making and their exquisitely recalled history was so inspiring I had to bring a little of it back to New Zealand with me — and I did, buying the Abd el Kadar scent.

This lead to a serendipitous crossing of emails with Cire Trudon as we enquired about representing them and they at the same time were enquiring with us about us representing them in New Zealand. It was a perfectly timed match and one that made me very happy to offer and present a brand that I am passionately invested in.

Daily grooming routine
I do not have an extended process, I have a fairly straightforward routine of washing my face, followed with a cream and oil combination as I have a slightly drier than normal skin. Choosing the right products has been the key in not building a fussy time-consuming morning ritual.

As required, I will also add a hydration boosting product if I feel my skin is feeling a little tired — though skincare can only affect so much. Diet, stress, water intake and environment can impact your skin more than you'd first imagine.

My routine, if you can even call it that, is all over within a matter of seconds after coming out of the shower, which is when I will put on my first fragrance of the day. There will be multiple.

Hair and its care
My hair gets little or no attention unless I notice its general untidiness, but it usually takes matters into its own hands and settles to a happy medium. I would describe my approach to hair care as low-intensity to inactivity. I wash it regularly without being fastidious and only style if I notice an issue or forget to take a hat.

I have been going to Ryder [salon] since it opened, which must be at least 15 years or more. When my then hairdresser left for the Mediterranean without inviting me, Greg [Murrell] kindly took over my yearly visits. I more or less leave him to do as he sees fit — trust good people I think — and am mainly there for the conversation. 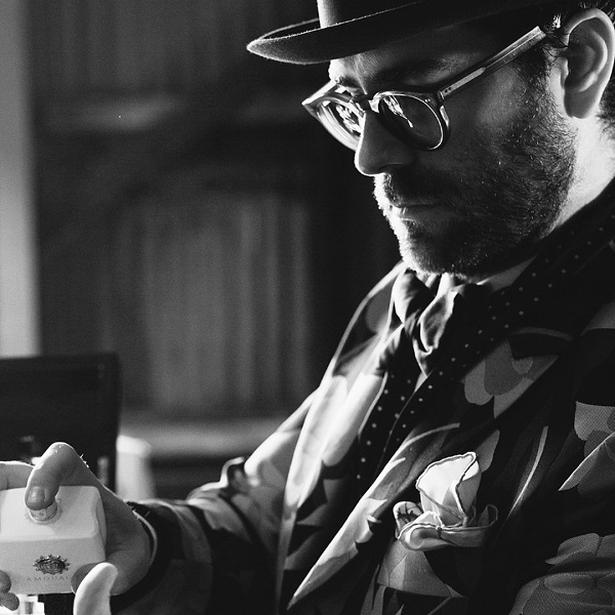 Benny's interest in fragrances has developed into a passion. Photo / @worldbrandinnz

NuoriI is a brand I found in a boutique in Prenzlauer Berg, Berlin and the salesperson kindly explained the virtues of this remarkable 100 per cent natural brand from Copenhagen, but also the unique care they have taken to create their products, from the careful science, to the clever packaging, and even the thought out production cycle to maintain the freshness of the ingredients. It won me over with the extraordinarily high level of thought and execution, yet simplicity of expression and ease of use.

Not only did I buy it then and there, but I bought the brand back to New Zealand at World Beauty.

The other item I love and use is a product we are no longer able to stock, a Japanese dry skin relief product called Yu-Be, an amazing fix all for dry skin — which as an asthmatic, who also gets eczema, has a stigmatism, and regularly picks up any other mild illness that would have killed me in the 1890s — Yu-Be is at the least solving that one issue for me.

Grooming is…
An opportunity to express yourself, as yourself — whatever that may look like.

Full-blown — or should we call them full-grown — beards seem to be the only concession to winter warmth Kiwi blokes will make.