The building was essentially rebuilt with walls of glass to look out on the surrounding Stadtpark, or City Park, in Vienna. Picture / Steirereck If there's a clichéd concept for food travel, it's the bucket restaurant list. The idea, popularly thought to have come from the 2007 film "The Bucket List," might be only about 10 years old. But it feels as if it's been kicking around much longer and is overused enough to have inspired listicles as random and useless as a roundup of the best-fried chicken in Orange County, California.

That said, it's a satisfying exercise to make a list and then check things off it. And destination restaurants make for a gratifying list.

What follows is a list Bloomberg's two restaurant writers compiled that represent places we've travelled to that were so good we want to shout about them, along with spots that are on our own bucket lists. Included are a sublime restaurant in the hills of Provence and a no-frills dining room in Vietnam that cooks only one thing: catfish. Because yes, as clichéd as restaurant bucket lists are, we keep them, too.

Elkano, Getaria, Spain
Set in a minuscule beach town between Bilbao and San Sebastian where every restaurant seems to be a destination, Elkano is legendary for fish. It's a very simple recipe. Chef/owner Aitor Arregui gets all his seafood locally and then cooks it over a battery of grills fueled by charcoal made from oak. The speciality is turbot, barbecued in a grill basket with a few squirts of a secret mix of oil, vinegar, and salt created by Arregui's grandmother. 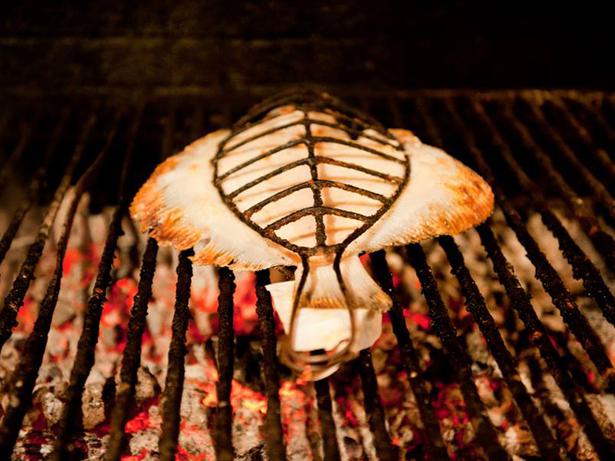 The celebrated turbot at Elkano in Getaria, Spain. Picture / Elkano

Arregui maintains that part of the secret is to have the turbot skin blister enough for the flames to flavour the meat itself. Before he serves the meaty, lightly smoky fish, Arregui picks out the bones and adds another generous drizzle of the family's secret oil.

Gustu, Bolivia
While Peru's food is much in vogue, neighbouring Bolivia has yet to rise to the level of dining destination. But Gustu is worth considering, both for the quality of the cooking and for the importance of its mission of educating disadvantaged young people and supporting the country's farmers. The ingredients are sourced from farms across Bolivia, and a school is attached to the restaurant.

The dishes may be unfamiliar: You might find yourself eating raw lama with salty capers from Tarija, washed down with Bolivian wine. Gustu was opened in 2013 by Claus Meyer, co-founder of Noma, who installed Danish chef Kamilla Seidler to run the kitchen. While it is a social experiment, it's also a place with very interesting food.

READ: Top Spots for a Long Lunch on a Rainy Day

Steirereck, Vienna
Steirereck is frequently described as the Noma of Austria, a time-tested restaurant with a modern menu in a city not known for gastronomy. In fact, Steirereck is completely singular. The old building was essentially rebuilt with walls of glass to look out on the surrounding Stadtpark (City Park); the view feels as thrilling as Chef Heinz Reitbauer's inventive cuisine, with such plates as coconut-water-poached crayfish with celery root salad, and barbecued beef forerib with potato cream, blue poppy seeds, and alpine sorrel.

The honey course-a tasting of exemplary jars-is accompanied by the buzz of a bee colony. The mood here is completely relaxed, which is good because meals tend to stretch over several hours. There's a more casual option: The wine-focused Milchbar is hidden below Steirereck.

Mirazur, Menton, France
This charming destination at the foot of mountains overlooking the Mediterranean is just a couple of hundred yards from the border with Italy. It's easily reached by train from Nice, yet it feels exotic, almost isolated. The dining room, housed in a 1930s rotunda, offers spectacular views. 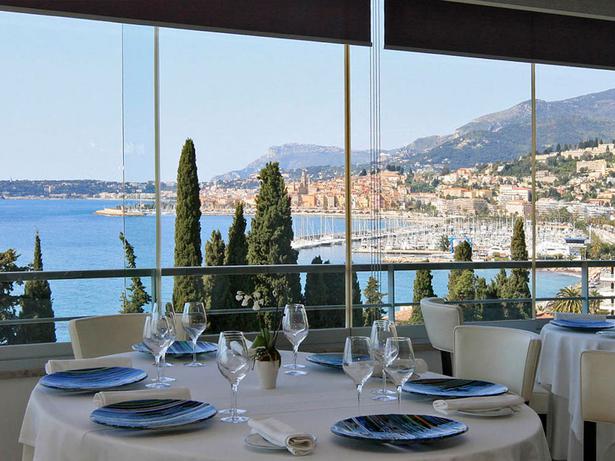 Mirazur, in Menton, France, is a charming destination at the foot of mountains overlooking the Mediterranean, just a couple of hundred yards from the border with Italy. Picture / Mirazur

Argentine-born chef Mauro Colagreco uses local produce to create seasonal dishes inspired by the sea, the mountains and the garden. It's worth splurging on the tasting menu, which features signature dishes such as blue lobster, French cocoa beans and chamomile broth.

SingleThread Farms, Healdsburg, Calif
A restaurant to make you believe in the tired phrase "farm to table." In the sleepy town of Healdsburg, on the edge of fancy wine country, chef Kyle Connaughton uses ingredients from the five-acre farm tended by his wife, Katrina. Canapes such as caviar-covered local oysters decorated with tiny flowers are arrayed on a mossy branch. Connaughton, who cooked in Tokyo for years, emphasizes Japanese influences with California ingredients for such dishes as cured foie gras flavoured with cocoa and rooibos tea.

The restaurant is in a terrifically appointed five-room inn with amenities that include luxe Japanese towels and deep bathtubs. With the room comes breakfast, and the chef is expert at preparing Japanese donabe smoked trout, house-cured bacon and frittatas made from fresh eggs.

The Lost Kitchen, Freedom, Maine
In an impossibly scenic setting-a converted New England grist mill accessed via a bridge over a waterfall-chef Erin French has created an incredibly personal experience in the tiny coastal Maine town called Freedom. The place is open only four days a week, eight months a year, for 40 guests a night. Thousands of people compete for those seats in a simple dining room with wooden plank floors and tables unburdened by cloths. 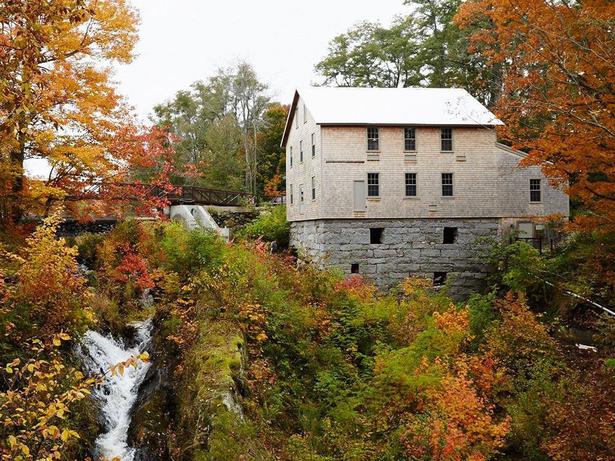 Here's why: French serves exquisite, simple dishes using local ingredients such as clams for her New England chowder with homemade saltines and Maine bluefin tuna with the tiniest turnips. To add to the charm, wine is available at a shop downstairs; guests bring it up in wicker baskets. It's like the ultimate dinner party to which you're extremely lucky to get an invite.

Maaemo, Oslo
An unexpected dining destination, Maaemo is in a modern office block near Oslo's main station. The views are of railway tracks, and the soundtrack is of passing trains. Yet Maaemo is worth a trip to Norway, a country of great natural beauty. It holds three Michelin stars, the only Norwegian restaurant to receive that accolade.

The cuisine might loosely be called new Nordic in the sense that it uses local ingredients and employs cooking techniques, such as pickling, that are necessary in such a cold climate. But chef Esben Holmboe Bang has his own voice, independent of culinary fashion. There are just eight tables in the main dining room, so good luck getting one. If you do, you might experience lightly frozen fresh cheese with smoked wild salmon eggs and langoustines served with dry ice to create a mist that smells of Norwegian pine.

Raymonds Restaurant, St. John’s, Newfoundland
A throwback dining room on a remote coast in a small city sounds as if it would be the newest Nordic spot to capture food lovers' attention. Instead, this is a restaurant in Canada, a country that doesn't show up frequently on gourmet to-do lists. Raymonds, under the stewardship of chef Jeremy Charles, makes the seafood and game of eastern Canada wildly compelling. 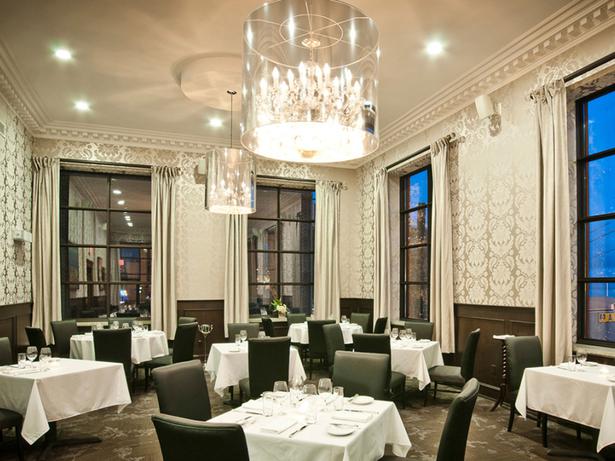 Sushi Saito, Tokyo
The commotion about Jiro is still so deafening, it's hard to remember that there are other elite, tiny sushi spots in Tokyo. Joel Robuchon, the French chef who has compiled 31 Michelin stars, has called Saito the best sushi restaurant in the world, and the eight-seat counter in Roppongi has three Michelin stars of its own. Takashi Saito sources such seafood as aji (which he serves with ginger), tunas from lean to fatty (akami, chu-toro and o-toro), voluptuous uni and sweet and salty anago, and the classic tomago to finish.

It's not that any of it is out of the ordinary; the sashimi and sushi progression is relatively standard. It's the extraordinary quality and the quiet little tweaks in ageing some pieces, as well as finessing the rice, that elevates this spot to a new plane.

Cha ca la Vong, Hanoi
There's no question about what you'll eat at this nondescript upstairs restaurant. It will be sizzling catfish, vibrant with herbs, spices, and chilis. The dish's name is that of the restaurant that's so popular it's also the name of the street, to which such notable chefs such as James Beard award-winning Chris Shepherd from Houston have come to sample it.

It's a very DIY experience: A burner with a worn skillet is set up at your place at a communal table for turmeric-marinated fish, sizzling in garlic oil with copious amounts of dill and shrimp paste. The diner adds the accoutrements that come to the table, including bowls of herbs, marinated hot chiles, peanuts and unadorned rice noodles.

Blue Hill at Stone Barns, Hudson Valley, New York
Many bucket list restaurants fall into either the impossible-to-get-to or impossible-to-get-into category. Stone Barns is neither. A 45-minute drive from Manhattan, the restaurant is set in an old stone building on a former Rockefeller Estate. The magnificence of Blue Hill has everything to do with chef Dan Barber's explorations of the 80 acres of land surrounding him. 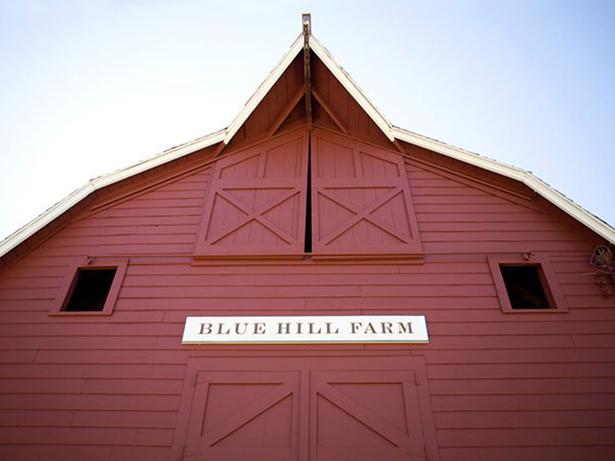 Guests are given small notebooks instead of menus, and pristine baby radishes, turnips, and other tiny vegetables are pinned vertically on a wooden slab for snacks. Later in the meal, you might have the best eggs of your life, warmed in the heat generated from a compost pile.

Helga's Folly, Sri Lanka
You probably wouldn't go here for the food alone, although it's a reliable mix of such Sri Lankan dishes as spicy coconut soup, fish cakes and hoppers (rice flour pancakes) with curry. But the pilgrimage to this gothic hotel on a hillside in dense jungle makes the trip worthwhile. Just a taxi ride from the historic Sri Lankan city of Kandy, it's a million miles from convention.

The warm air is thick with exotic scents and the sound of insects. A wall is all that separates you from leopards and other wild animals. The rooms are filled with mysterious paintings, and wax from candles drips to the floor in stalactite formations.

Visitors to the house over the decades have included actors Vivien Leigh, Laurence Olivier, Peter Finch, William Holden, and Gregory Peck. Over it all presides enigmatic owner Helga de Silva Blow Perera, celebrated by Britpop stars The Stereophonics in their song "Madame Helga."

The Hottest Places to Eat and Drink in Brisbane

When it comes to dining out, Brisbane has plenty of stylish, world-class options