If there is an official deli season in New York City, it’s right about now. The weather is cool, the bathing suits are packed away, and it’s not yet roast-every-food-you-can time of year.

It’s also full-on tourist season, which means that the lines at Katz’s Deli — of When Harry Met Sally fame — are going to become even longer than they already are. Jake Dell, the 29-year-old owner of Katz’s, talks like he’s a 75-year-old deli guy and has strong opinions about how to behave at his deli-and every classic Jewish deli. (In fact, he grew up at the place; his grandfather, father, and uncle officially bought it almost 30 years ago.) He wants you to know what they are. Because he’s not afraid to kick you out.

1. Have a hot dog as an appetiser
“My true New Yorkers, my die-hard Katz’s fans, know that we serve the best hot dogs in the city. We are consistently rated as No1 in the hot dog department. There’s a reason for that: We make them with all-natural beef and crispy casing, and they’re juicy in the centre. So get a hot dog first. Then, while you’re waiting for your pastrami, you eat your hot dog. And there’s only one way to eat a hot dog, with mustard and sauerkraut. None of that Chicago dog nonsense: no relish, no pickles, no salad garnish, no ketchup. Well, ketchup is okay — if you’re under 6-years-old.”

2. Pastrami has rules
“I talk so much about pastrami, people often tell me to shut up. But, if you come into my restaurant and order the classic pastrami sandwich and ask for it on white bread with mayo, I might not be able to stop myself from throwing you out of my establishment. I’m nicer than my grandfather, who would have actually done it. I might at least serve it to you, with a scowl on my face. Pastrami is meant to be eaten with mustard. No ketchup, either, though it’s okay with french fries. I’m not thrilled about ketchup on our brisket sandwiches, but my grandmother would do it. I love her, so I’ll let you order it, but it helps if you’re an 85-year-old Jewish grandmother when you ask for ketchup with your brisket.”

3. Mustard is the most important condiment
“We make our own mustard. It’s spicy, deli brown mustard that is so phenomenal and pairs so well with pastrami and corned beef, and with knishes and hot dogs. When someone asks for yellow mustard, I say, ‘You have mustard on your table’. When you look at a Crayola box, the crayon that’s labelled as mustard is different than the yellow one. That’s because mustard is supposed to be yellow-brown. So no yellow, not-real mustard with your pastrami, please.”

4. Interact with your pastrami cutter
“We designed Katz’s so that you interact with the guys that cut the meat. You tell them, ‘I want a little bit of this,’ and they give you samples. It’s 100 per cent your right and your obligation and duty to say, ‘I like this, I don’t like this, I want it juicier, I want it leaner.’ 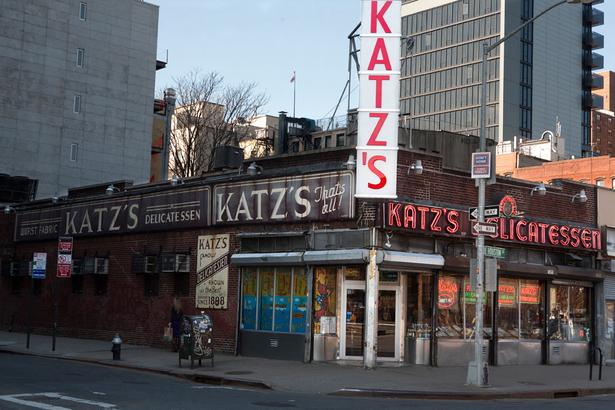 Katz's Deli is a must-visit in New York - but obey the rules for a good time. Picture / Katz's Delicatessen

6. White bread is not real bread
“Rye bread is the best tried and true complement to a traditional deli sandwich. Look, I know everyone is now a foodie and an expert, but we’ve been around for 129 years, and we’ve learned a thing or two about how to make the perfect sandwich, which is pastrami on rye with mustard.”

7. The turkey sandwich is a good move

“One thing you might not know about Katz’s is that I would put our turkey against anyone’s. It’s an all-white-meat, hot-turkey number, like Thanksgiving in sandwich form. It’s what I eat most days because you can’t eat pastrami every day. You can get gravy with it, and you can also do mustard. I frown on mayo, as you know, but I allow it on turkey — also lettuce and tomato. Turkey allows for a few more compromises than pastrami.”

8. The reuben is a fake sandwich
“If we’re calling a spade a spade, a reuben is not a real sandwich. No true Jewish deli would have had cheese [with meat], ever. So how could you make a reuben without cheese? The short answer is, you can’t. It’s a fictional sandwich. That doesn’t mean it’s a bad sandwich. When people tell me that a traditional reuben has corned beef and that I’m doing a crazy reuben with pastrami, I say, none of them are traditional.”

9. Try the latkes
“My goal is to make the world’s second best latke; your first should be made by a family member. Our latkes are based on an old family recipe: The potatoes are chopped, not grated, with a nice amount of potato inside, and they’re crispy outside. Way back when-we’re going back decades, generations-different family members competed to see who made the best one, and that’s what we serve at Katz’s. It’s a fun family story, anyway: the mythical, epic battle of the bubbes. Personally, I’m sour cream with the latkes, but there’s applesauce, too. No ketchup. It’s not a hash brown.”

10. Go for it
“Here’s my perfect Katz’s meal: I would order a hot dog, half a pastrami, juicy, with matzo ball soup. With a side of latkes and maybe some French fries, if I’m feeling crazy. And if I can do it, I’m getting cheesecake, too. And if I’ve got a group of people, I’m splitting a knish, and putting a reuben sandwich on the table, too. There’s a lot more perfect meals you can do, depending on the size of your party.”

11. Don’t lose your ticket
“You might have read the stories. When you enter Katz’s, you’re given a little ticket: It’s your check. It’s a classic system, you don’t see it anywhere else. You take it with you, as you go station to station. Even if you didn’t get anything, we need it back so we know you didn’t eat anything. We don’t want to be a pain in your ass, but when you serve 4000 people a day, you need a tried-and-true system. Don’t talk to me about updating with computers; we need that ticket. People who lost their tickets — they might still be washing dishes (I’m kidding) — we try to help them find it. But if it’s gone, you have to pay a fine. So don’t lose it.”

12. Keep your eyes on the prize
“And while you’re holding your ticket, know that there isn’t one line; each counter has its own, so there are as many as seven lines. My regulars are very aware of this. If you’re standing around trying to take pictures for your social media, don’t get mad when people push past you. It’s eye of the tiger here. Come hungry and be prepared to bring it, and we’ll take care of you.”
— Bloomberg

Fresh from showing at New York Fashion Week, designer Karen Walker shares what she loves most about the city.

Douglas Rogers has tried almost everything New York's eating scene has to offer, once dining out with Tim Zagat of the highly-r...