A vocal advocate for diversity and inclusion both in front and behind the camera, the actor and socially engaged human is passionate about sharing stories centred on joy

A higher purpose is imbued into everything Yara Shahidi does. The 19-year-old American actor, who describes herself and her heritage as "very proudly black and very proudly Iranian", is not only one of Hollywood's brightest young talents, but also uses her platform to spread her message of inclusivity, social revolution and joy into the world.

Having been in the entertainment industry for most of her life, Yara gained mainstream recognition as Zoey Johnson in Emmy and Golden Globe-nominated, socially aware comedy series Black-ish and its spin-off Grown-ish, and this year starred in anticipated teen drama film The Sun is Also a Star.

She was recently tapped to be a face for beauty brand Bobbi Brown, has nearly five million followers (and counting) on her combined social media accounts, and former First Lady Michelle Obama famously wrote her a reference letter for her admission to Harvard, where she's currently reading sociology and African-American studies. 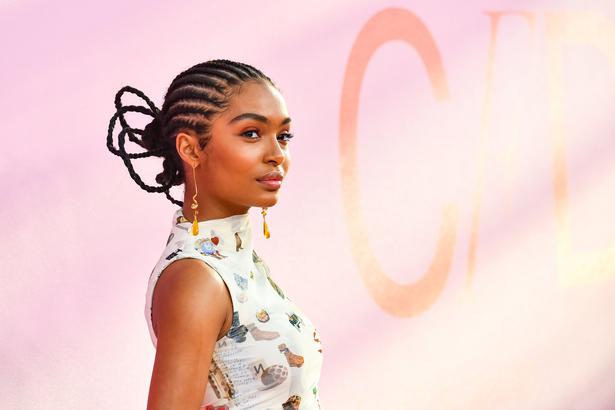 "The voice of her generation" and "activist" are two phrases that are often used to describe Yara — she prefers "socially engaged human". Photo / Getty Images

For many teenagers, all this would be more than enough to be getting on with. But Yara is among a growing community of young people deliberately stepping up to call for change. "Because at the end of the day," she said recently in her keynote speech at The Power of Inclusion summit in Auckland, "if you don't insert this purpose into what you're doing, then what are you doing? Because when I think about it, if I did not insert purpose into what I was doing, all I've done is make 22 minutes of watchable content at the end of every Friday."

Taking place in early October, the summit saw Yara join the likes of Geena Davis, Pose creator Steven Canals, director Niki Caro, Prime Minister Jacinda Ardern and many more recognisable names for a two-day line-up of conversations, speeches and panels. It was geared towards encouraging the conversation around the need for diversity and inclusivity of a wider range of ethnicities, gender identities, sexual preferences and abilities in all areas of entertainment and technology — a goal Yara is a vocal advocate for.

Meeting Yara in person, she is as warm, poised and intelligent as her on-stage persona suggests. It's a cliche to describe the appearance of a female interview subject, but the glow that emanates from her skin does seem to require some sort of written summary — radiant is the word.

Yara views appearance and fashion as another way of expressing herself and to help her take up space when perhaps she's not so certain. Today she is relaxed, in a clean-cut, white-belted jumpsuit by Cos, but she is well aware fashion choices can be a powerful statement. "I think fashion has always been a political tool," she says. "We've seen it throughout movements how fashion has been crucial in telling a narrative story, and I think being in entertainment myself I've seen how it's added to my characters or how it's reaffirmed what a person is like, what their personality is." Yara's family is tight-knit, and she credits her upbringing for instilling in her a sense of globalism and unlimited possibilities for her life. Her mother and father, Keri and Afshin Shahidi, both work in the entertainment industry — Keri was a commercial model and is now a producer, and Afshin is a photographer who worked with Prince. Yara's two younger brothers both model and act.

"My parents were really intentional with how I grew up — I had this alternate curricular of sorts, in which I always saw myself represented," Yara described in her keynote speech. "I had folklore from around the world — I was reading authors in which it felt like they were actively considering me when they were writing. And I didn't understand how powerful that was until I stepped into a world in which that wasn't the given."

The entertainment industry requires large infrastructural change, she says in our interview, so a wider range of people are represented not only in front of the camera but in executive positions and behind the camera, to ensure authentic storytelling. "How we innovate together is just when you have people of different backgrounds coming together."

This year, Yara and her parents founded a production company called Seventh Sun — a name derived from the W.E.B. Du Bois theory of the black person being the seventh son of the globe — and they aim to green light shows that centre on joy when it comes to people of colour, rather than hardship and conflict like so many stories centred on the black community's experience.

In conversation at the summit with journalist Malika Bilal, Yara explained: "So many times, our narratives are attached to these traumas — we aren't granted the space to exist. It's not to erase the importance of these conversations, not to belittle what we've had to go through as a people or as a community, but I think it's also making sure to take time to acknowledge we exist as full humans and not only in our trauma."

Yara speaks about fashion and beauty as eloquently as more serious topics, again demonstrating no subject has to be void of purpose. On being asked to represent Bobbi Brown, she emphasises just how collaborative the campaign has been between herself and the beauty giant. "I think any company that endows their trust in a young human to say 'we want to reflect you' is such a privilege and an honour," she enthuses.

The campaign talks about beauty from a standpoint of what it means to undefine beauty and to make it individual, says Yara, and the philanthropic side of Bobbi Brown as a brand aligned well with how she and her family and team manoeuvre. It helps that she already loved using the diverse skin-matched products, too. "I've grown up watching with a sigh of relief when somebody pulls out the concealer palette, because I know I'm going to walk out looking like myself." She touts the brand's crushed liquid lipstick as another favourite.

For British Vogue's special September issue this year, guest-edited by The Duchess of Sussex, Yara was included in a formidable line-up of women on the magazine's cover under the title Forces for Change. It was an incredible experience, she says, and she greatly admires editor-in-chief Edward Enninful for ensuring new faces and voices are centred in fashion. 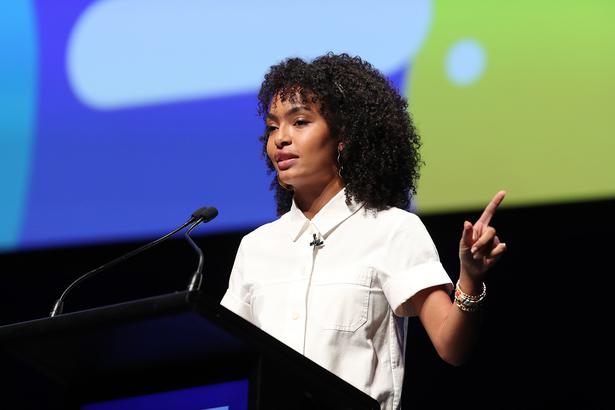 "Because at the end of the day, if you don't insert this purpose into what you're doing, then what are you doing?" Photo / Getty Images

Highly respected photographer Peter Lindbergh shot the images. He died shortly after the issue came out. "We talk about that shoot at least once a week if not every other day because of his energy and what he brought to it," Yara says with feeling. "It was one of the most incredible experiences I've had to date in terms of that level of joy that's palpable when somebody loves what they do." She smiles at the memory. "So, it was from start to finish an incredible process."

Jacinda Ardern also appeared on the cover, and while they were photographed on different sides of the globe, Yara was excited to share the spread with our Prime Minister. "Her stance on gun control — that is something that inspired so many of us State-side, seeing what a reaction could and should be to acts of mass violence," she says. "So I feel like she stood as a prime example in that moment of what we expect from leaders. I think since [then] she's had a large population of kids from the States just following what it means to be innovative in leading." 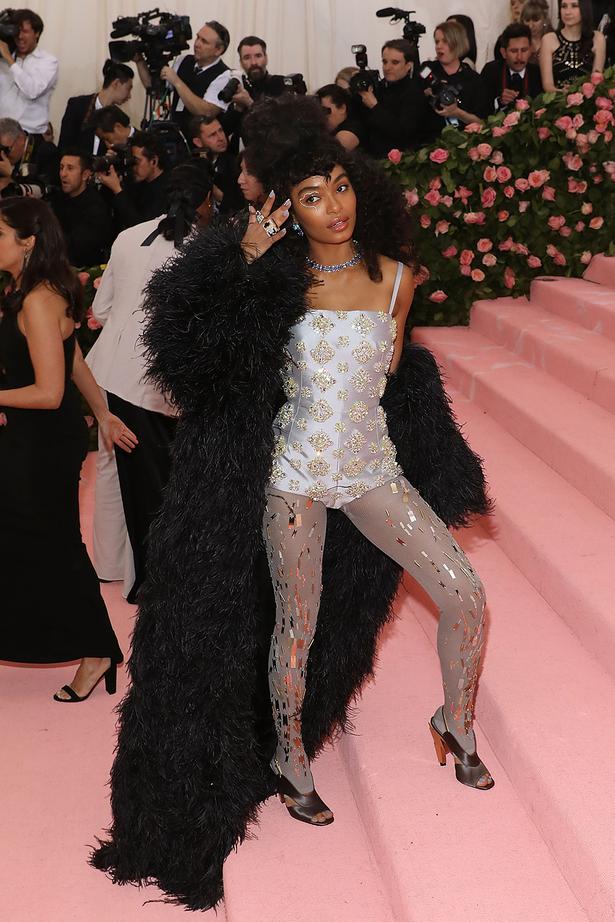 Anyone following Yara on Instagram is treated to regular videos of the actress dancing joyfully to her favourite song of the moment. When asked what music means to her, she reacts with a full-body shiver in her chair, accompanied by a grin of ecstasy.

"Oooooh! Music makes me so happy, as you can tell by my entire body response to that question," she laughs. "It always evokes such a strong emotion in me, and it's such a universal language especially because growing up in a global family, the music I received was always very global as well. It's just such a beautiful art form." Concerts are the one thing she will actually stay up late for — everything else is past her bedtime, she says, joking but not really.

"The voice of her generation" and "activist" are two phrases that are often used to describe Yara — she prefers "socially engaged human". This includes showing a political nous and passion that many people with years on her don't have. Last year she launched Eighteen x 18, soon to be named We Vote Next, an initiative aimed at encouraging young people to be engaged in politics. For the 2020 American elections, her hope is that people walk into them with a sense of humanity. "We've witnessed globally this loss of humanity in terms of how we talk about crisis, about persecuted people and what's happening in our world," she told Malika Bilal at The Power of Inclusion.

If Yara feels under pressure to present a sparkling, flawless version of herself to an ever-growing and attentive audience, she doesn't show it. She associates feeling her most confident and beautiful with being able to feel unabashedly like herself. "It's always been connected to things like my music or being with family or friends," she says. "I think people that are familiar with my Instagram page always see me drawing on my face with eyeliner and such but I think when I'm able to be my most creative... so it's never quite tied to a look itself, but when I feel all parts of who Yara is."